(Minghui.org) Ms. Sui Guanghua from Zhugou Town, Pingdu City, Shandong Province was arrested on April 4, 2012 by the Chinese police for talking to people about Falun Gong. She was subsequently sentenced to three years in prison by the Pingdu City Court. 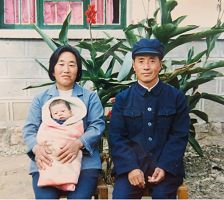 Ms. Sui Guanghua and her husband

Ms. Sui Guanghua, 65 years old, is a resident of Zhuxi Village, Zhugou Town, Pingdu City, Shandong Province. On April 4, 2012, Ms. Sui was talking to people at the local Zhugou Town Market, while Liu Baoguo from the Law Enforcement Bureau of Zhugou Town followed her and telephoned the local police station and had her arrested. Ms. Sui was initially detained at the Pingdu City Detention Center. Later, she was transferred to the Qingdao City's Dashan Detention Center, which was later moved to Jimo of Qingdao City and renamed as Qingdao Police Supervision Office. The authorities did not allow her family to visit. In November 2012, her family received a letter from Ms. Sui and learned that she had been sentenced by the Pingdu City Court to three years in prison and had been transferred and detained at Shandong Province Women's Prison in Jinan City.

Ms. Sui had been sentenced twice to forced labor by the authorities. On July 5, 2007, Ms. Sui, Zhang Yuemei from Qiegezhuang Village of Zhugou Town, and Li Jihua from Zhuxi Village went to the Guojiazhai market in Yunshan Town. Upon their arrival at the market, several plainclothes police officers, who had been following them, accused them of defrauding people. The policemen then used wooden sticks to corner them into a ditch by the road. Police officers also forced them to sit on the ground and humiliated them in front of all the people at the market. Ms. Sui saw an acquaintance in the crowd and asked that person to be an eyewitness in order to prove that they were law abiding citizens. The police feared exposure of their actions and took the three practitioners to the Yunshan Police Station. Later, the authorities transferred them to the Pingdu City Detention Center.

Around noon that day, the police went to practitioner Zhang Yuemei's home and broke down the door with hammers. They ransacked the home and confiscated materials about Falun Gong. Then they went to search the homes of practitioners Li Jihua and Sui Guanghua. Zhugou Town Police Station authorities had been monitoring the three practitioners for quite some time. The authorities feared that it could stir up people's resentment if they were to arrest the three practitioners in the open. Chief Zhao Hongwu from the Zhugou Town police station hatched the plan to arrest them. Police officers at the Pingdu City Detention Center told their families, “If you turn in money, we will release them in half a month.” However, on the thirteenth day of their detention, they were transferred to the Wangcun Women's Forced Labor Camp in Zibo City, Shandong Province.

On April 13, 2010, 63-year-old Sui Guanghua was arrested again by two plainclothes officers from the Zhugou Town Police Station, when she distributed materials about Falun Gong at the Zhugou Town market. Her home was illegally searched. Later that afternoon, she was transferred to the Pingdu City Detention Center. After a few days, she was again transferred back to the Zhugou Town Police Station, where she was photographed and taken back to Pingdu City Detention Center, where she was detained for 15 days. The authorities deceived Ms. Sui's husband into signing the sentencing documents and extorted 800 Yuan from him. On April 28, 2010, Ms. Sui was sentenced to one year of forced labor and taken to the Wangcun Women's Forced Labor Camp in Zibo City.

“Introducing Falun Dafa on a Radio Station in Croatia ”