(Minghui.org) The 2013 Taiwan Lantern Festival concluded on March 10. A record-breaking 12 million people attended the festival. Falun Gong practitioners' Fa-Boat lantern was a unique attraction at the festival. Many people learned about Falun Gong and became interested in learning the practice. Tourists from the mainland China, including Chinese Communist Party officials, learned about the persecution of Falun Gong and the world-wide campaign to stop the persecution.

The Lantern Festival is an annual holiday celebrated on the fifteenth day of the first month of the Chinese calendar. It marks the end of lunar New Year celebrations. The occasion is a time of much ritual and public festivities. The Taiwan Lantern Festival described here is a major national fair which this year ran for two weeks from February 24 through March 10, 2013.

The Making of the Fa-Boat Lantern

Falun Gong practitioners made the Fa-Boat lantern with traditional lantern-making techniques. The thirteen-meter-tall (about four stories) boat can hold up to fifty people. It was the first time visitors could get onto a lantern. Twelve lotus petals held the golden boat. Nine rotating Falun symbols of different colors decorated the sails. On top of the three masts were three flags with golden characters “Truthfulness” “Compassion” and “Forbearance.” The Fa-Boat lantern looked solemn and glorious in the sun, and splendid at night. 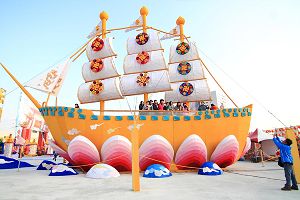 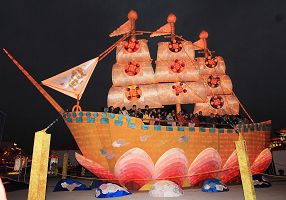 Ms. Zhang Shuwen, who won the title of “King of Double Lanterns” and the two ladies in her lantern-making team were completely amazed by the huge boat lantern. Ms. Zhang said “Gorgeous! Magnificent” upon seeing the lantern for the first time. She admired the well-arranged lights and elegant decorations. She said, “Such a huge lantern must have taken a lot of work from many people. I'm most impressed by the lantern-makers' hearts: their united and cooperative spirit!” 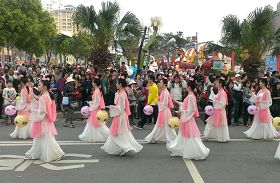 Celestial maidens in the parade hold lanterns bearing the words “Falun Dafa is great!” and “Truthfulness, Compassion and Forbearance are great!” 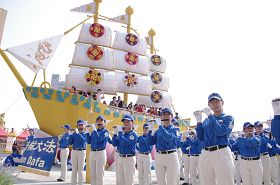 The Divine Land Marching Band performs in front of the Fa-Boat lantern.

Mr. Zhang Degui is Secretary General of Hsinchu County Photographer Association. Touched by the spirit of the Divine Land Marching Band, Mr. Zhang said, “It think they are great, not only because of their faith, but also because of their dedication to public service.”

Mr. Chen Zhengyi, a retired businessman, said he had started paying attention to Falun Gong a few years ago. “They are inspiring the good side of people. It's exactly what's needed in our society. It think it is great! I hope Falun Gong practitioners will spread the seeds of Truthfulness, Compassion and Forbearance among people and let them grow.”

Many people took this opportunity to learn more about Falun Gong. Some left their contact information and asked Falun Gong practitioners for information about group exercise and instruction.

Ms. Huang Yinqiu, a Falun Gong practitioner in Hsinchu County, helped organized a photo exhibition during the lantern festival. The exhibition displayed Falun Dafa's spread all over the world and the persecution of Falun Gong practitioners in the mainland China. A tourist from the mainland China asked in excitement, “Who gave you permission to hold this activity here? Is it legal? How could the county government give space to your activity? When did Taiwan start allowing Falun Gong?” Ms. Huang patiently and kindly answered all his questions. The tourist was surprised to hear that Falun Gong has been spread in more than one hundred countries around the world, and the Chinese Communist Party (CCP) was the only one that banned it. After hearing the true story behind the April 25, 1999 appeal of over 10,000 Falun Gong practitioners in Beijing, he became silent. He studied the photos and left in deep thought.

Another tourist from the mainland China looked like a CCP official. He visited the photo exhibition and listened to Ms. Huang's introduction to Falun Gong and details about the persecution. He finally said, “Falun Dafa is great!”