(Minghui.org) The 2013 Western Australia Falun Dafa Experience Sharing Conference was held in Perth on Feb. 24, 2013. Ten practitioners from across the region presented experience sharing papers at the conference. They shared insights gained in the process of cultivating the heart, looking inward and letting go of attachments. 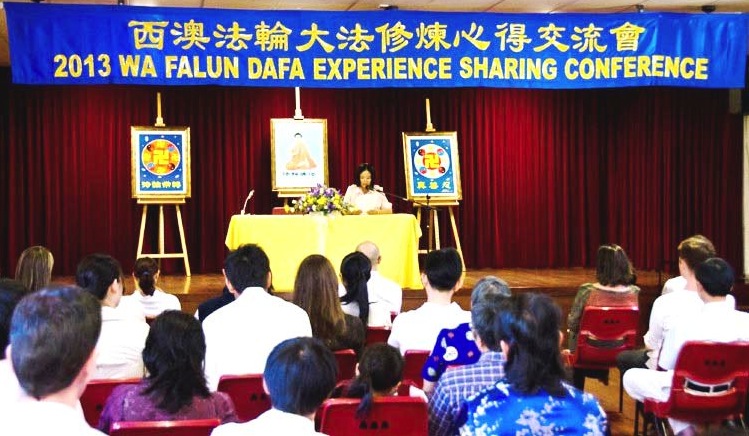 The 2013 Western Australia Falun Dafa Experience Sharing Conference
Jana is a Falun Dafa practitioner from the southwestern part of the State of Western Australia. She talked about letting go of the attachment to showing off that arose in her while doing coordination work.
She said her tribulations were resolved as she learned how to look inward and view things according to the Fa teachings. Even though others might get angry with her, she has learned to still treat them with compassion. She also realized that she should thank her fellow practitioners for helping her to improve. When she had an opportunity to share her thoughts with others, they all made improvement.
Susan is also from the southwestern part of the state. She explained in her presentation how she changed from focusing on project coordinators' shortcomings to looking for her own.
Wendy, who lives in the largest city in Western Australia, Perth, shared her experience of looking inward through concentrated Fa study. “The reason why I focused on others' shortcomings was that I failed to look inward. I had been following the formality of Fa-study, but it hadn't gone into my heart. The amount of study time wasn't enough either. This was the reason why I couldn't follow the Fa principles when facing harsh criticism. Then I began to memorize the Fa. I stopped arguing with others. I encouraged myself with examples from  Zhuan Falun."
A practitioner from Perth named Werther shared how he let go of the attachment to self and cooperated with others. He said, “In many cases I gave up my attachment to my own idea and listened to what other practitioners had to say, even though I thought their ideas weren't the best. It was painful at the moment I had to give up my self-centered  attachment, but when it was over, I felt that my cultivated side was stronger.”
Brandon shared how he broke through the fear of being hurt and opened himself up. He said, “In the past few years I coordinated a Fa-validation project at Curtin University. I only invited those who worked well with me to take part, because I was afraid that otherwise my way of doing things would be questioned. But this year, I decided to break through my fear and invite more practitioners to join. As a result, we received great support from local practitioners for an upcoming event. We will now be able to do better job introducing Dafa to more than ten thousand people at Curtin.”
Participants at the conference agreed that they learned a lot from the experience, and many spoke of how they were able to find areas where they themselves fall short.
Falun Dafa experience sharing conferences are always very well attended. Practitioners come from near and far to find themselves tremendously inspired by the opportunities for personal growth and encouragement that the conferences provide.
Conference attendees often speak of becoming motivated to reaffirm their determination to diligently cultivate themselves - to continue to let go of their attachments and to work together to advance as one body in the months and years ahead.

“Let's Cultivate Ourselves Well and Save Sentient Beings with Compassion ”