(Minghui.org) Falun Gong practitioner Ms. Wang Ling from Tieling City, Liaoning Province, was arrested by officers from the Public Security Bureau of Tieling City for her faith in Falun Gong. She was sent to the notorious Masanjia Forced Labor Camp in Shenyang City three times for a total of eight years and tortured with stretching, hanging, freezing, bundling, beating, etc. All of her teeth were knocked out. At present, she is mentally incapacitated and very feeble, and can only walk slowly. She can't stand for very long. 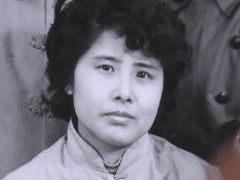 Ms. Wang Ling before being incarcerated 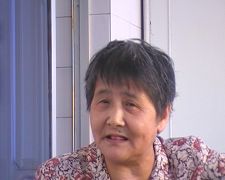 Ms. Wang Ling after her release

Ms. Wang Ling was employed by the Hongwei Factory of Tieling City. She started practicing Falun Gong in 1997. Before that, she suffered from heart disease, nephritis, headache, breast numbness, stomach problems, etc. After she took up the practice, all of her health problems miraculously disappeared within a short period of time. Because her family witnessed the great benefits of the practice, her sister, Ms. Wang Ying, also began the practice in 1998.

After the Chinese Communist Party (CCP) started persecuting Falun Gong in July 1999, Ms. Wang and her sister, as beneficiaries of the practice, went to Beijing to appeal to the government. Ms. Wang was arrested in 2000, 2003, and 2007 and sent to Masanjia Forced Labor Camp for a total of eight years. Her sister, Ms. Wang Ying, was sentenced and sent to Masanjia for three years. The following is a partial account of what Ms. Wang Ling endured in the labor camp.

Beaten and Held in Solitary

One practitioner who was detained in Masanjia said, “The persecution that Ms. Wang Ling went through in Masanjia Forced Labor Camp was so outrageous that there are no words to describe it. Even so, Ms. Wang Ling never compromised with the evil or stopped protesting the persecution. She shouted 'Falun Dafa is good' no matter where she went. Because of that, those in charge often beat her and put her solitary.” In December 2001, labor camp officials forced practitioners to listen to audio clips that slandered Falun Gong, but Ms. Wang always refused to listen. Even though officers ordered her to listen, she refused to cooperate by going on a hunger strike. She was then handcuffed for over three weeks and detained in a cell for six days. She also was deprived of sleep and forced to undress in the cold. In August 2002, another practitioner refused to go to the brainwashing center, so the guards tied her to the bed and tortured her by “stretching” her and made her listen to the slanderous audio clips. When Ms. Wang Ling learned about this on her way to the bathroom, she rushed into the room and unfastened the practitioner. After the guards found out, they first punched and kicked her, then took her to the cell on the first floor, where she was handcuffed to a bench for several days and nights and deprived of sleep.

Tied Up for Nine Hours

At the end of 2002, Masanjia Labor Camp guards cooked up a “Storming fight” tactic to try to get steadfast practitioners to “transform.” Because Ms. Wang Ling refused to “transform,” the police tied her up with a rope in full-lotus position for nine hours. This caused her tremendous pain, because the rope stopped her circulation.

Handcuffed to the Tiger Bench and Left in the Cold

In 2003, Ms. Wang Ling was kept in the third unit of the labor camp. Because Falun Gong and Master Li were slandered in broadcasts every day in the camp, Ms. Wang shouted “Falun Dafa is good!” Because of this, she was taken to a cell on the fourth floor by officer Qi Fuying and held for 10 days. They then handcuffed her and shackled her feet to the Tiger Bench and stretched her limbs in four directions, causing excruciating pain.

It was in the middle of winter and especially cold at that time. The tiger bench was so cold that it penetrated the victim's very bones. The windows in the cell were left open. Ms. Wang Ling was tortured almost to death before she was released. (After a week in the cell, a person's skin usually peels off.) After Ms. Wang was released, she had to stay in a warm room to recover. But her hands, feet, and face were still swollen.

Afraid that other practitioners in Masanjia would reveal what they had done to Ms. Wang, those in charge secretly transferred her to Dalian Forced Labor Camp. At that time, one of the practitioners who was also detained in Masanjia witnessed the horrendous torture Ms. Wang endured and wrote a sad poem:

Police in Masanjia are especially cruel
In a cell on the top floor
Snowflakes fly in through the open windows
In the cold of winter
The Tiger Bench sits in the middle of the cell
People shiver in the cold, surrounded by the bare walls of the cell
Shouting until one's throat is raw, but no one can hear you
A steadfast practitioner encounters harsh tribulations
She was left in the cold with no food for 10 days
She was near death
Her hands, feet, and face were swollen
She was put in a warm room to recover
She was secretly transferred elsewhere without anyone seeing her
The police were afraid that practitioners would spread their evil deeds

Tortured in Dalian Labor Camp for Nearly a Year

Dalian Forced Labor Camp is no less evil than Masanjia. As soon as the 56-year-old Ms. Wang arrived at Dalian Labor Camp, the police ordered inmates to strip her naked and locked up in an iron cage. She was hung up with her legs spread apart and doused with cold water. Inmates then opened the windows. She was inhumanely tortured this way in the cold for days and days. It was winter. Even the inmates who tortured Ms. Wang had to wear army coats. The police ordered a drug addict to tie up three toothbrushes into a bundle, with the bristles facing outward, and threatened to poke them into her vagina.

After seven days and nights of torture and humiliation, and seeing that Ms. Wang was completely unable to move her arms, the police released her. When she was released, one could see that the handcuffs had cut into the flesh on her wrists. She could barely stand, let alone walk. (Several years after she was released, she still couldn't even hold a bun.)

Persecution Intensified During the 2008 Olympics Games

Prior to the 2008 Olympics, a large number of male police officers were stationed at Masanjia Labor Camp. They ruthlessly tortured all practitioners who were steadfast in their faith. One wrong word would incur severe punishment. In June 2008, a group of police led by Ma Jishan stationed at the “Special Supervision Unit” ordered several practitioners who had been severely persecuted before to stand up. Because they refused to stand up, Ma started cursing at them. Ms. Wang Ling went up to reason with them. They pushed her away. Ms. Wang shouted, “Falun Dafa is good!” They handcuffed Ms. Wang to the bed rail and sealed her mouth with tape. That day, practitioners, including Xu Hui, Sheng Lianying, and Zhou Guimin, were severely tortured.

A Mouthful of Good Teeth Were Knocked Out

When detained in Masanjia Labor Camp, Ms. Wang always refused to “transform,” do slave labor, sign or write anything, or compromise with the police. She always shouted “Falun Dafa is good” no matter where she went. This really aggravated those in charge. One day, as she was shouting “Falun Dafa is good,” officers acting under Zhang Jun's orders knocked out her four front teeth and stuffed her mouth with rags and socks. There was blood all over her face and mouth. 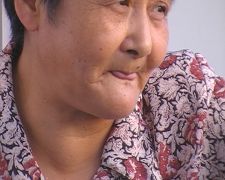 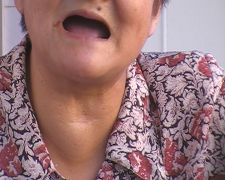 On another day, because Ms. Wang shouted “Falun Dafa is good,” several male and female officers pried her mouth open. The male officer stabbed her mouth with a wooden stick and knocked out most of the teeth she had left. Officer Zhang Jun jumped on and kicked her chest. After this incident, Ms. Wang couldn't eat normally and experienced chest pain for a long time.

When it was time for Ms. Wang to eat, because she didn't have that many teeth left, and the time allowed for eating was limited, she couldn't finish her meal on time. She would take the leftover food with her and mix it with water in order to swallow it. Sometimes the food was too hard to chew, and she could only drink the soup. Later, all of her teeth fell out.

Masanjia Labor Camp is notorious for its brutal treatment of Falun Gong practitioners. According to incomplete statistics, as of today, 47 practitioners have been persecuted to death, over 30 have become mentally disordered, and numerous others injured or disabled in this camp. Ms. Wang Ling is one of the many. The details above are just part of what Ms. Wang endured in the labor camp. For the past eight years, she was tortured, beaten, brainwashed, etc. Because the insidious persecution was carried out in secret, and the fact that Ms. Wang became mentally disordered due to the persecution, more details are unavailable. Many people witnessed and described Ms. Wang's ordeals.

Although the above is just part of what witnesses saw, it is a glimpse of the brutal nature of the wicked CCP and how it has tried to eliminate Falun Gong practitioners. It is evidence of the hellish labor camp system under the CCP. It is also a witness to the unswerving devotion and sacrifice of Falun Gong practitioners who uphold the truth.

Good and evil will receive their due. This is a heavenly principle. The CCP, because it has committed all kinds of evils, will perish in shame. Those who have persecuted practitioners will face justice.