(Minghui.org) On February 19, 2013, Canadian Prime Minister Stephen Harper announced the establishment of the Office of Religious Freedom within the Department of Foreign Affairs and International Trade. In his remarks at the press conference marking the official opening of the new office, the Prime Minister mentioned the persecution of Falun Gong in China as one of the concerns of the Canadian government. 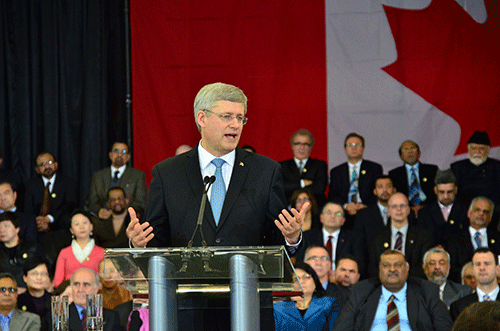 Canadian Prime Minister Stephen Harper announces
establishment of the Office of Religious Freedom
Canadian Government promotes religious freedom
The new office will focus on promoting freedom of religion and belief around the world. The office will monitor abuses and advocate for religious freedom. It will also provide analysis and create programs to protect religious minorities under threat and oppose religious hatred. The new office will become the primary avenue for Canada to advance freedom, democracy, human rights, and the rule of law, said a statement from the government.
Several hundred representatives from various religious groups attended the press conference. At the  press conference, Prime Minister Harper stated, “Around the world, violations of religious freedom are widespread and they are increasing.” He stressed that the Canadian government promotes religious freedom and tolerance, among the most important values of Canada.
The Prime Minister specifically mentioned religious persecution in China. “In China, Christians who worship outside government-approved boundaries are driven underground and their leaders are arrested and detained while Uighur Muslims, Tibetan Buddhists, and Falun Gong practitioners are subjected to repression and intimidation.”
“The list, appallingly, goes on,” he said. “In the face of these injustices and atrocities, Canada will not be silent.”
When a reporter asked the Prime Minister how Canada would develop relations with China while the Chinese Communist Party persecutes Falun Gong, Prime Minister Harper stressed the three priorities in diplomatic policies: democracy and Canadian values; domestic and international safety and peace; and commerce, trade and prosperity.
He said that all of these goals could be achieved if handled properly. He indicated that care must be exercised as Canadian values could be compromised in international commerce and trade.
"We will speak for those groups being persecuted"
The Chinese Communist Party's (CCP) persecution of Falun Gong is ongoing and cruel. Earlier this month, on February 5, 2013, a hearing on organ harvesting of Falun Gong practitioners in China was held by the Subcommittee on International Human Rights of the Standing Committee on Foreign Affairs and International Development of the Canadian Parliament. International human rights attorney David Matas and senior politician David Kilgour attended and provided evidence of the ongoing atrocity.
Jason Kenney, Minister of  Citizenship, Immigration and Multiculturalism, told reporters at the press conference, as pointed out by the Prime Minister, Falun Gong practitioners in China, as well as underground Christians, Tibetan Buddhists, and Uighur Muslims are groups that need protection. He affirmed, “We will speak for them.”
Limin Zhou, representative of the Canadian Falun Dafa Association, was invited to attend the press conference. Upon hearing the announcement of the launch of the Office of Religious Freedom, she stated, “The CCP's persecution and arrest of Falun Gong practitioners and the CCP's crime of live organ harvesting are ongoing. The Canadian government and society are concerned about the crimes. Today the Prime Minister mentioned that Falun Gong practitioners are persecuted. I hope that it will have a positive impact in stopping the persecution.”
Xue Sheng, Chairperson of the Federation for a Democratic China, also attended the press conference. She said, “In China, the CCP's persecution of Falun Gong is the most typical persecution of belief. The CCP also persecutes underground Christians, Tibet Buddhists and so on. In a country without democracy, any ideology or belief that is different from the regime will be persecuted or suppressed.”
Xue Sheng noted that so many people, possibly from more than one hundred belief groups, attended the press conference and this was power. News of the gathering will be spread to regions without democracy, including China. She said, “It is a great encouragement for people of religion and belief. It is a warning to those regimes that persecute religious freedom.”