Australia: Thousands of Chinese Visitors Choose Bright Futures for Themselves in front of the Sydney Opera House

(Minghui.org) Falun Dafa practitioners in Sydney have had an informational stand in front of the Sydney Opera House since the beginning of 2013 to bring an important message to tourists from Mainland China: Ensure yourself a bright future by quitting the Chinese Communist Party (CCP) and its affiliated organizations.

The 14-year-long persecution of Falun Gong has been covered up in China, and the country is blanketed in false propaganda demonizing the peaceful spiritual practice. Practitioners encourage Chinese people to quit the CCP as a way of supporting Falun Gong, believing that doing so will help bring these people a brighter future when the truth is ultimately revealed and those responsible for the persecution are brought to justice.

Volunteers at this stand have helped approximately ten thousand Chinese tourists quit the CCP and its affiliated organizations since the stand was set up at the beginning of January. Many of the tourists are family groups and some are teachers traveling with their students. 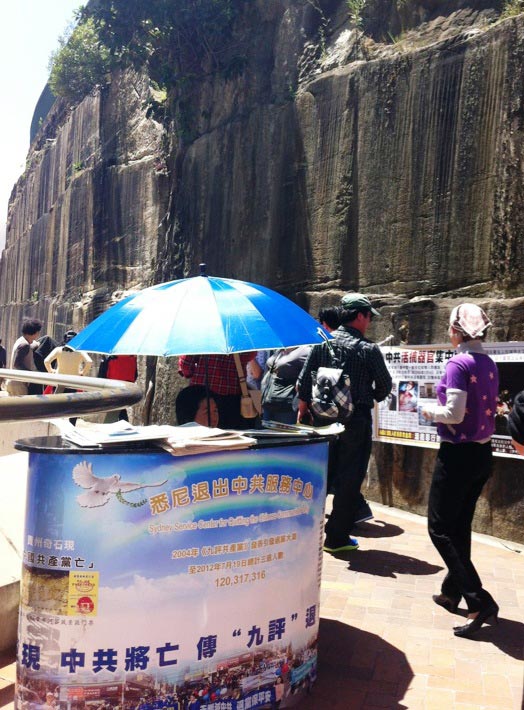 Service Center for Quitting the CCP located in front of the Sydney Opera House.

Mr. Bai, a volunteer at the Service Center for Quitting the CCP, said that there have been many Chinese tourists stopping by for information. Many of them, after reading posters with photos and facts of the persecution of Falun Dafa in China, have readily quit the CCP and its affiliated organizations. Many have taken fliers and DVDs, and a number of tourists simply walk over to the stand just to say, “You have been working so hard. Thank you.”

A teacher from China told the volunteers that she had quit the CCP and its affiliated organizations on the Internet. She pointed at her students who were reading the posters, and told them, “Go ahead and read some more! You've got time!” There was a mother who was accompanying her son and daughter. After she read the posters, she went over to the stand and quit the CCP organizations. She helped her son quit the Communist Youth League and her daughter quit the Young Pioneers. She was very grateful to the volunteers.

Mr. Bai said that there was a man from Guangdong Province who did not know anything about the Chinese regime’s harvesting organs of Falun Gong practitioners for profit. “He asked many questions and before he left, he took a lot of informational materials with him, wanting to learn more about it,” Mr. Bai said.

Ms. Yue, in her seventies, has been a volunteer at the Service Center for a long time. She has helped about 1,000 Chinese people quit the CCP and its affiliated organizations. Ms. Yue was very impressed with a couple who were lecturers at a university who visited Sydney with their child. She told them that the CCP was the real cult and explained the history of Marxism. After they understood the truth of Falun Dafa and the evilness of the CCP, one of them said, “After I return to China, I will never teach anything about Marxism. I'll only teach the five thousand years of divinely-inspired Chinese culture such as the doctrines of Confucius and Mencius.” They thanked Ms. Yue and took a large number of fliers and DVDs with them before they left.

The Service Center for Quitting the CCP has become a welcome addition to Chinese tourists' list of important destinations when they visit Sydney.