(Minghui.org) The documentary “Free China” was screened in Mercede Hall of Palazzo Marini, the Italian Parliament Building. Government officials and many people from legal and medical circles watched the documentary and were shocked by the Chinese Communist Party's (CCP) crime of harvesting organs from living people. 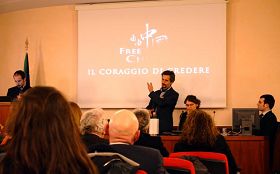 There were human right lawyers, doctors and members of human rights organizations among the audience. One human rights lawyer said that he hadn't heard of the persecution or the organ-harvesting before he watched the documentary. He strongly supported activities exposing the crime. More people should know about the atrocities happening in China. A doctor specializing in liver disease said that he was shocked by the organ-harvesting. He expressed support for the Falun Gong practitioners' freedom of belief.

The attendees thanked the Falun Gong practitioners and volunteers of NTDTV for the screening, which gave them an opportunity to learn about the facts.

“Sending New Year’s Greetings to Our Fellow Practitioners Being Detained ”