(Minghui.org) A group of practitioners in Turkey held a special seminar on Falun Gong and how it is being persecuted in China for Camlibel Lions Club members on the afternoon of February 12, 2013, in the southern city of Mersin. 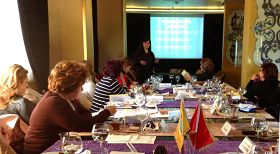 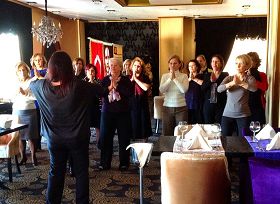 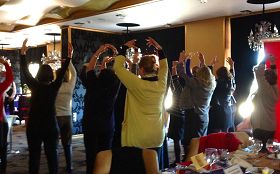 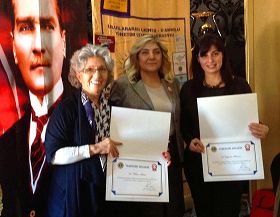 One practitioner gave a vivid PowerPoint presentation. During her 30-minute talk, she focused on several major topics, including the nature of Falun Gong, how Falun Gong has been embraced throughout the world, the facts about the persecution of Falun Gong in China, and the lawsuits against the chief perpetrators of Falun Gong around the world.

Falun Gong’s principles of Truthfulness-Compassion-Forbearance and its miraculous effects on improving health and keeping fit were of great interest to the nearly 20 members present. Many of them expressed a desire to learn Falun Gong.

The Chinese Communist Party’s brutal persecution of Falun Gong, especially its live organ harvesting from practitioners, enraged the attendees, who condemned such an atrocity. They expressed their deep sympathy for the victims of the persecution and hoped to see an early end to the crime.

After the presentation, most attendees stayed on to learn the five Falun Gong exercises. In closing, the club president presented a certificate of appreciation to the practitioners, thanking them for presenting the truth about Falun Gong.

Two months ago, practitioners held a similar seminar for the Mediterranean Lions Club members. In response to the members’ great interest, practitioners helped them set up a group exercise site shortly afterwards.