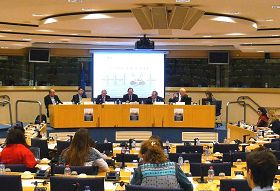 A hearing on “Religious Persecution by China: A Horror Story" held on January 29, 2013, at the European Parliament 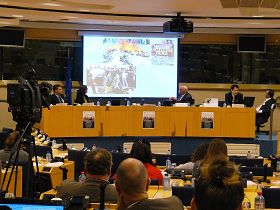 In December 2012, a hearing on "Falun Gong in China: Review and Update” was held in the US Congress. With the European Parliament's January hearing about the CCP’s religious persecution, the CCP’s persecution of Falun Gong has been kept in the forefront of world news.

Mr. Edward McMillan-Scott presided over the meeting and told of his meeting with Mr. Cao Dong and several other Falun Gong practitioners in China. He said, “I last visited China in 2006. I met with some dissidents, including Falun Gong practitioners. Afterward, they were all arrested and detained. Some of them were even severely tortured. "

The CCP's crime of harvesting organs from prisoners of conscience, especially Falun Gong practitioners, was exposed as early as 2006. The current evidence attesting to this crime is irrefutable.

Manyan Ng, Director of the European Falun Dafa Association, said: "When the CCP’s live organ harvesting was first revealed, many people were not surprised, because they thought similar things were occurring in other countries, such as Africa, India, South America, and so on. But what they do not know is that organ trafficking in these regions is only a small part of the triad acts, whereas in China, the CCP, taking advantage of the huge state machinery at its disposal, carries out large-scale criminal activities with government support. Apparently, the instances in the regions mentioned above cannot be compared with the crimes of the CCP. People are now increasingly aware of the CCP’s crime of live organ harvesting."

A doctor testifies about organ harvesting: “It was a terrible nightmare that I can’t get over” 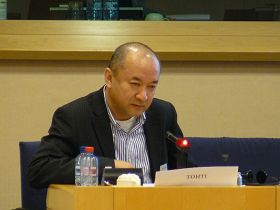 Mr. Enver Tohti, a Uyghur surgeon who harvested organs from executed prisoners, testified at the hearing

Mr. Enver Tohti, a Uyghur surgeon from Xinjiang, China, harvested organs from executed prisoners 15 years ago. He testified that he ran over to see the victim after hearing gunshots and saw that the man was not dead – because the executioner had deliberately fired at the right side of the inmate's chest to ensure that he was still alive while his organs were being removed.

He said: "There is no way for me to tell how I felt at that very moment. As a doctor, my foremost duty is to save lives. But it was me who killed that person, to some extent, by removing his liver and kidneys, and then he died. I feel like there is no way I can have forgiveness. For me, it is a kind of blasphemy of my duties as a doctor. So, for many years, my heart has felt very heavy. " 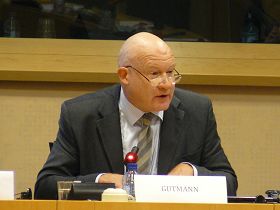 Mr. Ethan Gutmann, a China expert, estimated that about 65,000 Falun Gong practitioners have been killed for their live organs

At the hearing, Ethan Gutmann, a well-known China expert, and Dr. Li Huige, a German professor of medicine, presented detailed data and information, including a survey of the international human rights organizations; the testimony of more witnesses; defection testimony of former communist officials; calls made by international investigators to the Chinese mainland medical system and telephone recordings of the CCP leadership; the personal accounts of the detention and torture of Falun Gong practitioners; as well as the testimony of Western doctors, whose patients only needed to wait for two weeks to find a matching organ for surgery on a specified date. They testified that it all points to the presence of massive organ harvesting, which is still taking place. The victims include Tibetans, Uyghurs, and political prisoners. The largest group of victims are Falun Gong practitioners. Mr. Gutmann estimated that about 65,000 Falun Gong practitioners had been killed for their organs.

Gutmann pointed out that Wang Lijun, who fled to the U.S. Consulate in early 2012, and the subsequent series of events including the ban on the search word "Organ Harvesting" from the Chinese online Baidu search engine, suggested that Bo Xilai, Zhou Yongkang, and Jiang Zemin were behind the organ harvesting.

He said that he was very pleased to see that the international community had recently taken action. He said, "I went to Australia, and I was surprised to find that there is genuine movement at the policy level. Specifically at the lower levels of policy, at the local level, state level. In America, it's striking. I mean, to have a hundred Congressmen to come out and say: 'The State Department needs to say what it knows. What did Wang Lijun tell you? Did he tell you anything about organ harvesting?' Which is really the message of that letter that they wrote to the State Department. That is a big change!"

Member of the European Parliament: Live organ harvesting destroys lives and is an insult to human dignity 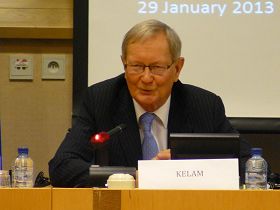 Tunne Kelan, member of the European Parliament, was also at the hearing. He said in his interview: "I think it is a very worrying, alarming problem.” He wondered how much the European public and European politicians really knew about the CCP's suppression of human rights, human dignity, and religion. He said that this was especially true when the country uses “re-education through labor” to reform prisoners, and when the state government gets directly involved in and trades their organs, even claiming that these are “state owned organs.” He commented that the state (the regime) has controlled its citizens and taken their organs, that this is morally devastating, and that if we don’t take this practice seriously, we will have become morally and politically co-responsible for what is going on. 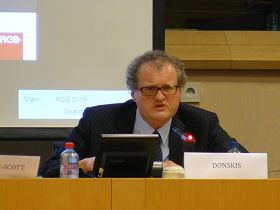 Leonidas Donskis, a member of the European Parliament: “Such crimes against humanity can only be associated with the Nazis.”

Leonidas Donskis, a member of the European parliament, said that this hearing was a wake-up call: "It's very difficult for people to believe that in a civilized country such things are possible. For Europeans or North Americans, such crimes against humanity can only be associated with the Nazis. This is a crime against humanity. It has to be said aloud that it's a crime against humanity that should be prosecuted by the Hague Tribunal. As simple as that."

After reading the investigative report by Kilgour and Matas on the CCP’s live organ harvesting of Falun Gong practitioners, Mr. Donskis believed that the information was very reliable. He continued: "Because people still think that some media people, some journalists, could be exaggerating some data. But after the Kilgour/Matas report, I think it was obvious [that they are] very credible. I believe that it was an eye-opening experience and people understood that there was something devilish, something absolutely nightmarish happening in China."

166,461 people in Europe signed the petition to ask the United Nations to investigate

Prior to this, on December 18, 2012, internationally renowned human rights lawyer David Matas submitted a petition weighing 84 kg to the United Nations Commission on Human Rights in Geneva. The petition was gathered from 36 countries in Europe, signed by 166,461 people who asked the UN to send an independent investigation team to China to investigate the allegations of the CCP’s live organ harvesting of Falun Gong practitioners. 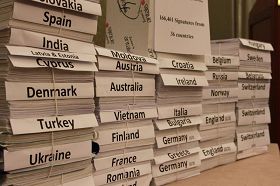 The petition was jointly launched on October 6, 2012, by the international NGO "Doctors Against Forced Organ Harvesting’’(DAFOH) Association And "Non-Violent Radical Party’’ in Europe. As of November 22, a month and a half later, signatures were collected from Switzerland, Sweden, the United Kingdom, Denmark, Germany, Ireland, Ukraine, France, Norway, Italy, Poland, Belgium, and other European countries, as well as Australia, Israel, and India and other countries. The signatures were from people of all walks of life, including some 700 members of the European Parliament, the European members of Congress, mayors and other dignitaries.

Doctor Damon Noto, a spokesman for DAFOH, said, "I believe it represents the will of the people in Europe, who wish to put an end to this atrocity."

Working together to learn the truth and stop the evil

Speaking on behalf of the Falun Dafa Information Center at the hearing, Zhang Erping said, "Now the international community has become increasingly concerned about the crime. We hope that all people are able to be aware of this matter, and put the persecution to an end as soon as possible."

He mentioned that in China now there have been many positive initiatives, such as the campaign to quit the Party, as well as circumventing the Internet blockade to learn the truth. Through the efforts of Falun Gong practitioners inside and outside of China to clarify the truth, the people in China have begun to stand up for justice. For example, incidents of citizens signing a petition to call for justice for Falun Gong practitioners have occurred in Hebei, Heilongjiang, and other provinces. Even as the harsh persecution of Falun Gong is still being carried out by the CCP, more and more people in the international community and Mainland China have learned the truth. They are opposing the persecution and making efforts to stop it.

Crane, a member of the European Parliament, said in an interview: "Today, when more and more information about the crimes committed by the Chinese Communist Party comes to light, we cannot pretend we do not get the information. Instead, we already have enough information. I think the things that today’s Mainland Chinese people are doing can give us enormous encouragement; they are pulling out of the CCP system that was built upon lies.

"Maybe the Chinese people cannot openly oppose the Chinese Communist Party or make political demands. This is because to do so they would be sent to prison, but the people can reject the lies and propaganda of the Chinese Communist Party, and they should keep their distance from the CCP and refuse to act upon the CCP’s media of lies. Every Chinese person, as an independent individual, can make his or her own choice. Although it is risky, it can save their souls, and maintain their integrity, and establish their status to become a responsible citizen. This is why, currently the Quit the CCP campaign has been spreading in mainland China, allowing them to opt out of the Party and the Party organizations. This movement will bring significant changes to China and even the world. "