Practitioner Hunger Strikes for 500 Days to Protest His Incarceration - 8,000 Sign Petition for His Release

(Minghui.org) A 50-year-old practitioner was arrested and incarcerated because he told people the truth about Falun Gong and the persecution. During his first imprisonment of five years, he was so brutally tortured that he became mentally disordered. Upon his release, he recovered completely but was arrested again and has now been on a hunger strike for well over a year.

Prison officials have force fed him with a sharp feeding tube, not to provide him with nourishment but to inflict pain.

Mr. Hua Lianyou from Tianjin started a hunger strike over 500 days ago to protest his detainment and abuse by the Chinese Communist Party (CCP). Thousands of citizens in Tianjin and Shandong Province have signed petitions to show their support and request that the CCP release him. After they had signed the petition a couple said, “We know Falun Gong people are good. The CCP is totally corrupt.”

8,048 people had signed the petition by the end of November 2013. The news that Mr. Hua has been on a hunger strike for over a year has drawn public attention both domestically and abroad. Those moved by his devotion and determination have signed the petition to support him, a total of 5,145 in the past three months alone. 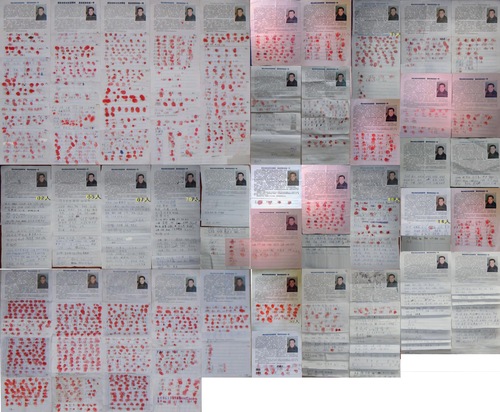 Signatures and fingerprints of 2903 people

Arrested and Tortured for Talking Publicly About Falun Gong

Mr. Hua was an accountant in a factory. He became a Falun Gong practitioner and followed its principles of Truthfulness-Compassion-Forbearance, thus earning people's respect.

After the Jiang Zemin regime began to persecute Falun Gong in 1999, he continued to tell people about the persecution and the benefits of Falun Gong and was sentenced to five years in prison in 2001. He was incarcerated in Tianjin No. 1 Prison, where he was tortured until he was mentally disoriented by the time of his release in 2006.

He continued to practice Falun Gong after his release and his health recovered quickly. He was arrested again on April 24, 2012, and sentenced to seven years in prison. He is now in Gangbei Prison (recently renamed Binhai Prison) in Tianjin.

Mr. Hua continued his hunger strike to protest his incarceration.

He was once taken to Xinsheng Hospital for emergency treatment. Prison officials have called his family to the prison many times and ordered them to persuade him to give up the hunger strike.

Mr. Hua told his family that he was beaten by inmates in Xinsheng Hospital and Gangbei Prison and was tortured with forced feeding. (They had sharpened the feeding tube to inflict more pain). The family was shocked and filed a complaint with the Tianjin Justice Bureau and the Prison Bureau, but neither organization has done anything.

Witness States Practitioner Was Abused in the Hospital

The witness also said that the inmate beat Mr. Hua. Hospital officials later noticed that Mr. Hua was in critical condition. In order to avoid being held responsible for him, they transferred him back to Gangbei Prison, where he continued to be tortured.

Not only was he force fed twice a day in prsion, inmates were instructed to make him sit on the ice cold concrete floor for two hours twice a day, once in the morning and once in the afternoon. An eyewitness said that an inmate with the last name Jin held Mr. Hua’s legs down with his legs, held his arms, and pinched his back.

Mr. Hua has been on a hunger strike for over 500 days, and his life is in danger. A guard said that he might die at any time, but prison officials have refused to release him.

Many citizens have signed petitions to secure the release of Mr. Hua, and the news was repeatedly reported by the media both domestically and abroad. The signing activities have spread from Tianjin and Hebei Province to Shandong Province.

The signatures collected represent only a small portion of those willing to sign. Some even put their fingerprints on the petition and condemned the CCP for its persecution of good people.

A college student signed the petition after he read about Mr. Hua. A middle-aged man said angrily as he signed, “The CCP always hurts good people. They even conspire with organized crime. They are doomed.”

Another man said, “I know about Falun Gong. The CCP is so corrupt, and it is afraid that it will collapse. But if they continue to do these bad things, they are destined to fall.” A middle-aged man said, “I know that Falun Gong practitioners are good people. Heaven will not allow the persecution of good people. Just wait and see. The CCP is falling on this count alone. Citizens don’t trust it and don’t believe in it anymore.”

An elderly practitioner, who never went to school, took the petition form to each local household and asked people to sign it. Whenever she met someone, she said, “A practitioner is imprisoned for practicing Falun Gong and because he is a good person. Can you help rescue him?”

An 80-year-old man with bone spurs struggled to get up because he was in pain, but when he heard that a practitioner was being persecuted, he said, “I want to help” and signed his name.

The over 8,000 people that have signed the petition are from Tianjin, Hebei Province, and Shandong Province. Many citizens have stepped forward and condemned the CCP. Heaven is watching, and good deeds will be rewarded and bad deeds will be punished. The authorities in Tianjin, particularly those in Gangbei Prison, need to "read the writing on the wall." They need to remember Bo Xilai, whose family was penalized because of his crimes against Falun Gong, and stop persecuting good people.

Mr. Hua must be released immediately.

“My Eyesight Was Restored after I Began to Practice Falun Gong”