(Minghui.org) The voices of Falun Gong practitioners' family, friends and attorneys loudly calling out echoed across the open field outside a brainwashing center in Heilongjiang Province on the afternoon of December 5.

Over 20 people, including four defense attorneys, family and friends of the detained Falun Gong practitioners, gathered outside the center and demanded that Fang Yuechun, the center director, immediately release the illegally arrested practitioners.

December 5 was a very cold day in Heilongjiang Province. That afternoon, the wind whipped the deep snow that was piled on the ground. Several warmhearted local residents provided more winter clothes to those standing out in the cold. The relatives and attorneys thanked them and continued to call out to the center, as well as to the nearby residential area to raise awareness of the crimes perpetrated at the brainwashing center. Inside the center, the officials and staff remained silent. As the afternoon turned into evening, they didn't even dare to turn on any lights.

The gate remained locked and chained from the inside. Finally, a guard came out of the gate, took a look at the small crowd gathered outside, and went back inside. Later, another guard came out, looked around, and also went back in. Occasionally someone stood at a window, but there was no official response.

The attorneys and family members stood outside the gate for over three hours in the freezing cold. They could not enter, and no one came out to receive them. So, they continued to communicate their message to the brainwashing center and nearby residents by calling out. The entire time, the police simply watched.

At one point, the sound of pounding came from inside the center, sounding much like someone hitting the windows or the iron bars at the windows. It was as if the detainees heard the calls and were replying to the family members and attorneys in the only way they could. 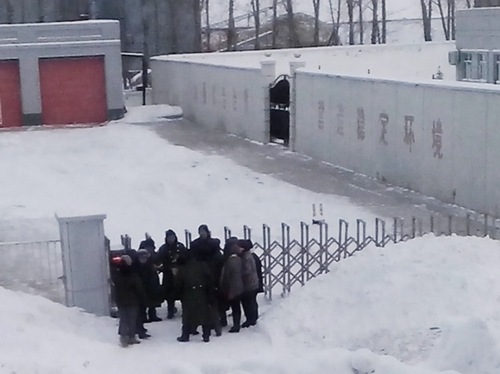 Family members request the release their loved ones. As shown in the picture, the identification plaque usually posted at the entrance was removed by officials the day of the attorneys' visit. 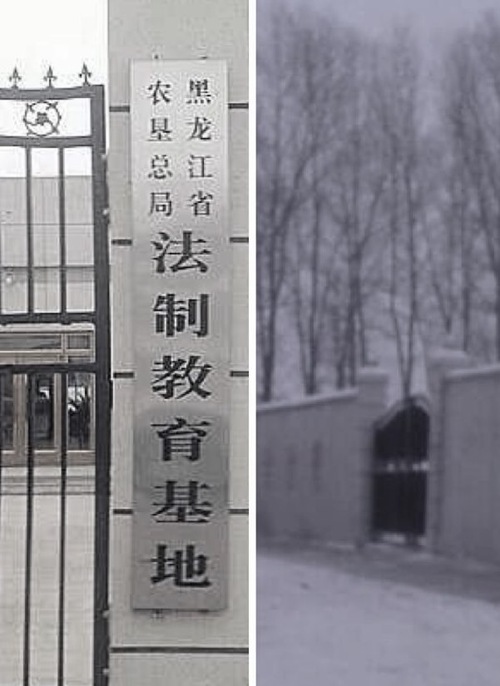 Two policemen from the Qinglongshan Police Department arrived at the entrance a little after 3 p.m. When the attorneys asked if they were representing themselves or the police department, the officers didn't give a definitive answer. 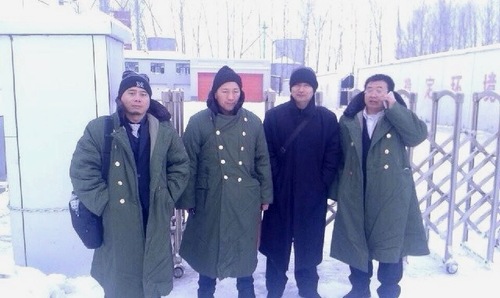 Shortly after the family members and attorneys left, at around 5:40 pm, details of the visit were posted on the Internet through weibo (micro-blogging similar to Twitter). Government officials removed the original weibo posts. The local government temporarily blocked phone calls from other areas, as people were calling residents in Qinglongshan to ask about what was going on. In addition, all the street lamps in Qinglongshan were suddenly out for about 20 minutes, plunging the entire city into darkness.

Despite government efforts, the news of the protest still spread. In an interview with Sound of Hope, a US-based radio station, attorney Jiang Tianyong, one of the four attorneys, said, “This [detention of practitioners at the Qinglongshan Brainwashing Center] is a typical illegal detention, as described in criminal law. According to Chinese law, for such unlawful incidents, anyone has the right to stop the suspects and send them to the police.”

Meeting at the Procuratorial Office

The following day, the practitioners' family members and attorneys went to the Jiansanjiang Procuratorate to discuss the illegal detention of the practitioners at the Qinglongshan Brainwashing Center. The receptionist told them that there was a meeting going on and refused to receive them. When asked how long the meeting would last, the receptionist said, “I do not know. We have not had a whole staff meeting like this for a long time.” The attorneys waited in the waiting room. 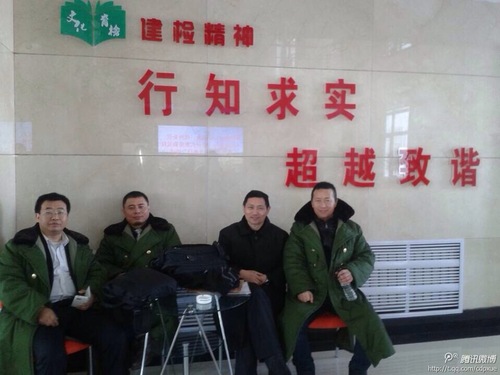 Officer Sun and staff member Ma, both from the Appeals Office, interviewed the attorneys after the staff meeting. They first discussed with Ms. Liu Rangying and her attorney Zhao Yonglin about Ms. Liu's case. (Ms. Liu had previously been detained at the Qinglongshan Brainwashing Center.)

During the discussion the staff members' attitude was condescending and arrogant. The other attorneys and family members had to wait outside the interview room for a chance to speak with the staff.

Next, attorney Jiang Tianyong talked about the case of Mr. Yu Songjiang, who had been detained in the past and had been recently arrested and was being held at the brainwashing center again.

The meetings finished around 12:30 p.m. Seeing that the Appeals Office did not plan to take effective measures, the attorneys warned them to abide by the law with regard to Falun Gong and reserved the right to sue them later on.

They requested to meet with the procurator. Because the actions taken by the brainwashing center violated their clients' constitutional rights, the attorneys requested that the detained practitioners be immediately released. In addition, they said that they would post their request on weibo, wechat and other social media channels. In an attempt to prevent the officials from shirking their responsibilities, the attorneys did not leave the Procuratorial Office. Instead, they bought box lunches and ate them there.

Around 2 p.m. a Jiansanjiang police officer threatened to monitor and retaliate against the attorneys and family members. Officials at the Procuratorial Office were initially not cooperative, but their attitude changed after the attorneys pointed out the illegal actions of the brainwashing center and the Procuratorate's refusal to take appropriate action.

At 3 p.m., deputy procurator Hao Hongjun talked with the attorneys and family members. Attorney Wang Cheng requested that they investigate the brainwashing center's and the police officers' unlawful actions. After reviewing the cases, attorney Tang pointed out that the persecution of Falun Dafa was groundless and illegal. When Hao attempted to separate the attorneys and the practitioners' family members, attorney Jiang stopped him and stated the legal implications of doing so.

The practitioner's attorneys stated that they would not give up their quest for justice.

A Lengthy Quest for Justice

That day as well, the brainwashing center staff refused to meet with them and they called out loudly outside the center. They and Dafa practitioner Mr. Yu Songjiang visited several agencies the next day, including the Jiansanjiang Procuratorial Office, the Jiansanjiang Discipline Inspection Commission, and the Jiansanjiang Police Department.

Threatened by the Police

When the practitioners' attorneys and relatives went to the brainwashing center on December 5 and the Procuratorial Office on December 6, they were followed by plainclothes police. In addition, police also harassed Mr. Shi Mengchang's sister and other Falun Gong practitioners.

Below are comments about these incidents, posted on weibo , “Nobody has the authority to illegally detain people,” “Illegal detention is considered a felony. Whoever supports this should also be investigated.”

Falun Gong practitioners held in brainwashing centers are not given due process of law, and detention can be arbitrarily ordered by the 610 Office, an agency that overrides the law. The goal of these illegal detentions is to mentally destroy practitioners and “reform” them – coercing them into giving up their belief. Tactics routinely involve oppressive brainwashing sessions and physical abuse, including torture.

“Farmer Sentenced to 3 Years in Prison for Handing Out a DVD; Over 2,800 People Sign Petition for His Release”

“The Journey Back Home”