(Minghui.org) Today's news from China includes incidents of persecution that took place in 7 cities or counties in 6 provinces. According to this report, 11 practitioners were subjected to mistreatment during their detention, and at least 4 practitioners were illegally arrested. 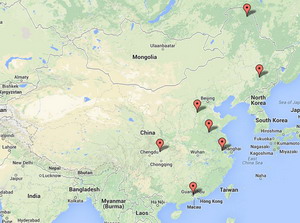 Xue Kejiu and others from the Hanjiayuan Police Department broke into Ms. Se Guirong's home and ransacked it on May 21, 2013. They took away Falun Gong books and informational materials. Police used the key they took from Ms. Se and broke into her house again on May 22. They then stole five necklaces, two silver bracelets, two jade bracelets and an incense burner.

Six practitioners were arrested on the morning of May 4, 2013, including Ms. Jiang Qun from Feng County, Ms. Sun Meiying, Ms. Guo Yanhua from Jinxiang, Shandong Province, Ms. Liu Qiaozhen, Ms. Si Xiuli from Pei County, and Ms. Li Xinrong from Lianyungang. They were illegally tried at the Feng County Court on the morning of November 15.

Officers from the Bailuquan Police Station arrested three practitioners for speaking to the local villagers about Falun Gong on the afternoon of November 10, 2013. One of the practitioners was subsequently released. Ms. Zhang Yun and Ms. Ma Surui are still detained.

Ms. Zhang Meiying, in her 50s, was arrested by officers from the Domestic Security Division and Ximen Police Station on November 8, 2013. Ms. Huang Wenqin, a doctor from the Qingan Hospital, was also arrested that day. The two practitioners are currently detained in Changzhou; their exact location is not known.

Mr. Li Weidong went missing on November 4 or November 5, 2013. His current whereabouts are unknown. It is suspected that he may have been arrested.

Mr. Wang Naibin, an elementary school teacher from Xiaweizi Village, Wudaogou, Piaohe Town, and his wife have been missing ever since they went out together in 2001. No one has heard from them or knows of their whereabouts. They left their children (twins) at home. The children have been raised by their grandmother; they are now about 17 years old. It is suspected that the couple was abducted by the communist agents for their belief in Falun Gong.

“A Lesson in Kindness and Grace: From a Low-Ranking Official to Prime Minister”

“Vision of the Wise”