(Minghui.org) A petition with more than 70,000 signatures was presented to David Shoebridge, Member of the Parliament for the State of New South Wales (NSW) in front of the state Parliament building on November 27, 2013. The petition seeks an end to the illicit harvesting of organs from living Falun Gong practitioners by asking the NSW Parliament to amend an existing law. The law would restrict NSW citizens and residents from obtaining organs harvested from unwilling victims, prohibit the training of doctors engaged in illegal organ trafficking, and penalize those who receive organs through illegal means. 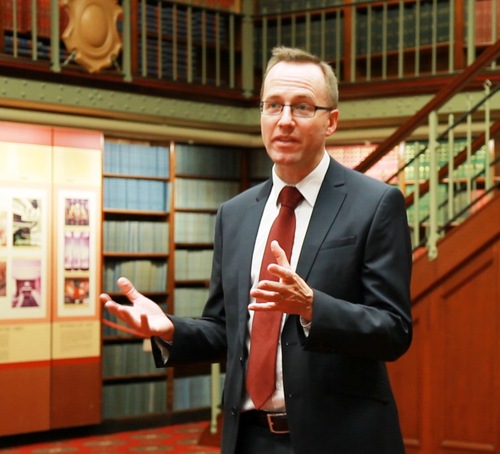 David Shoebridge, Member of the Parliament for the State of New South Wales

One hundred thousand signatures were submitted to NSW Parliament last May. Thus, MP Shoebridge submitted a total of over 170,000 signatures, which is the highest number of signatures by the public in the lifetime of NSW Parliament. On November 27, he submitted the over 72,000 signatures to NSW Parliament to support the bill that he proposed last February: New South Wales Human Tissue Amendment (Trafficking in Human Organs) Bill 2013. Once the bill is passed, it will become an amendment to criminal law and illegal organ trafficking will be considered as manslaughter. If convicted, one can be sentenced to imprisonment for up to 25 years.

MP Shoebridge personally thanked the Falun Gong practitioners for their efforts in the petition drive. He said that due to the awareness and support of more and more people, the Chinese government has been under immense pressure. He mentioned that other countries that conduct organ trafficking are also under pressure, while several countries including the United States, Canada, Israel, and some European countries are paying more attention to the issue.

Dr. Lucy Zhao, Director of Australia Falun Dafa Association, said, “I am happy to see the signatures have been accepted by NSW Parliament. I believe that the signatures will have a positive impact not only in Australia, but also in China and other countries. Many medical professionals in Australia have come to know more about illicit organ transplantation in China. Israel has passed a bill to prohibit organ trafficking. Such concrete actions help to stop organ harvesting crimes in China. I hope other countries will establish similar laws.”

MP Shoebridge's bill will be released to the public and distributed to other MPs before it is voted on in the Parliament. The voice of the people urges the MPs to support the bill. The bill, once passed, will have an active impact on Australians and add momentum to the global efforts to stop the Chinese Communist Party's organ harvesting atrocities.

“Toronto, Canada: “Great Wall of Truth” Commemorates the Ninth Anniversary of the Nine Commentaries on the Communist Party”