Chengdu Practitioner Tortured for His Belief

Mr. Zheng Bin became healthy after he started practicing Falun Gong in 1997. However, he has suffered both physically and mentally over the past 14 years because of his determination to continue practicing his faith.

He was tortured at the Chengdu "Legal Education Center," also known as the Xinjin Brainwashing Center, on the evening of July 22, 2005: “The police officer shined a bright light to keep me from sleeping. They made noise or poured cold water on me whenever I closed my eyes. They handcuffed my hands behind the chair, hit my head, slapped me in the face, and stomped on the handcuffs. One officer shackled my arms shackled together. I almost fainted from the pain.” 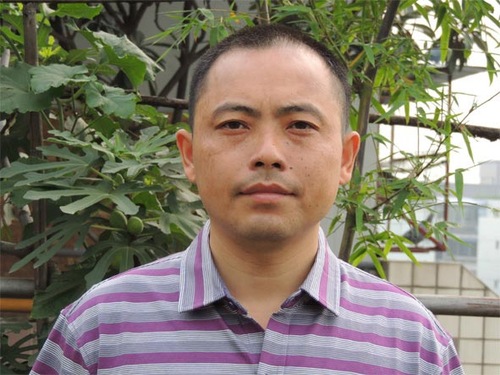 Positive Changes Because of Falun Gong

Mr. Zheng used to work in a factory in Shiling Town in the Longquanyi District in Chengdu. He suffered from chronic gastritis and a gastric ulcer, and there wasn't any improvement after long-term treatment. It was even hard for him to breathe when climbing stairs. He became healthy soon after he started practicing Falun Gong at the end of April 1997. He followed the principles of Truthfulness-Compassion-Forbearance and was diligent at work. Impressed by the positive changes in Mr. Zheng, all of his family members supported his practice of Falun Gong.

Arrested, Detained, Beaten, and Forced into Slave Labor Because of His Belief

Mr. Zheng was fired by his employer because he remained firm in his belief when Jiang Zemin and the communist regime started persecuting Falun Gong in 1999. Life became hard for his family because his wife was not employed at that time and their son was only three years old.

Mr. Zheng was charged with “disturbing social stability” and held in the Huaying Detention Center for 15 days in the winter of 2000, because he had a Falun Gong book in his hand. He recalled the painful experiences in the detention center: “In the cell, I was repeatedly beaten until I had pain in my chest and my back was bruised to a dark purple. My chest and back hurt whenever I turned over or breathed a bit hard.”

He was arrested in 2001 when he was watching a video with two Falun Gong practitioners at home. He was charged again with “disturbing social stability” and held in the Huaying Detention Center and beaten for over 40 days. His home was ransacked and the Dafa books and his identity card were taken away. He wasn't released until his father was forced to hand over 1,000 yuan as a security deposit. He has never gotten the Dafa books or his identity card back.

His home was searched again in 2002. He was arrested and detained in the Yuechi County Detention Center for more than 70 days. His father was again fined and handed over 1000 yuan before Mr. Zheng was released.

Mr. Zheng described what he suffered in the Yuechi County Detention Center: “As soon as I entered the cell, seven or eight detainees beat me and my nose bled. I was forced to do slave labor separating white pig hair from black pig hair. Without bench space or a stool, I had to bend over to work all day with no break. My back hurt every day. If I didn't get the work done, the guard would hit my buttocks.”

Mr. Zheng was at home with two Falun Gong practitioners around 3 p.m. on July 22, 2005, when suddenly the door was forced open. More than a dozen police rushed in, put them down on the floor, covered their heads with clothes, pushed them into a police vehicle, and took them to the Supoqiao Police Station. They also took Mr. Zheng's computer, printer, consumables, books, and several hundred yuan in cash.

Around 7 p.m. that day, Mr. Zheng and two other practitioners were taken to the Xinjin Brainwashing Center and detained separately. Two police officers interrogated them all night. Mr. Zheng recalled, “One of them irritated my eyes with a bright light to prevent me from sleeping. They deliberately made noise or poured cold water on me whenever I closed my eyes. They handcuffed me to the chair. One of them hit my head, slapped me in the face and stomped on the handcuffs. A police officer with the Municipal Police Department was very brutal. He shackled my arms together. The severe pain made me almost faint in the chair.”

Mr. Zheng was illegally sentenced to three years by the Qingyang District Court and held in Wumaping Prison in Sichuan Province. He was forced to stand in a military posture and run around every day. Guard Xu Wenlong colluded with inmate Zhang Chuanan to pressure the Falun Gong practitioners to renounce their belief. Zhang pretended to be friendly with the practitioners and be willing to listen to the truth about Falun Gong. Then he reported to the guard what he had learned. So the prison guards would design different means suitable for each individual to try to force the practitioners to renounce their belief.

Mr. Zheng's wife filed for divorce in August 2007 because he had been detained several times and she could not handle the pressure anymore. The family split up as a result of the brutal persecution, which had a negative impact on their young son.

Forced to Leave Home Due to Harassment

When it was time to be released at the end of May in 2008, Mr. Zheng was taken from prison directly to the Xinjin Brainwashing Center by officials Liu Dayuan and a few others from the Shiling Town Justice Department in the Longquanyi District. He was held there for over two months. The brainwashing center had a TV on all day to interfere with practitioners. The chief of the Shiling Town Justice Department threatened, “We will beat you if you don't want to write a guarantee statement to give up your belief, and we will put you in the forced labor camp if you still refuse to cooperate.”

Mr. Zheng talked to Zhang Lin, a community social worker, about Falun Gong in April 2009. He was reported. Then Liu Dayuan and seven or eight others from the local justice department, police stationm and local community office went to Mr. Zheng's home to arrest him the next day around 8:30 p.m. They knocked the door without giving their identities. They even waited downstairs for half an hour after Mr. Zheng's mother told them that he wasn't home. Mr. Zheng had to leave home the following day. Liu Dayuan and others often harassed Mr. Zheng's parents afterwards, asking them where he went and ordering them to tell where their son was, which made the old couple suffer tremendously.

Parties Involved in the Persecution of Zheng Bin: