(Minghui.org) Li Dongsheng, vice minister of public security and head of the 610 Office, is under investigation, according to a recent announcement by state-run media in China. Zhou Yongkang, former head of domestic security and one of Li's main sponsors in the Party, is rumored to have been either arrested or under house arrest. Zhou played a key role in implementing the persecution of Falun Gong through the 610 Office and other PLAC (Political and Legislative Affairs Committee) organizations.

The one-sentence media statement announcing that Li was under investigation has been widely interpreted as part of a carefully plotted move to take down Zhou. This has drawn attention to the role of the 610 Office and the future it faces.

The name of the office comes from the date it was launched--June 10, 1999. Although at that time the Chinese Communist Party (CCP) was still officially claiming to have a non-interference policy towards Falun Gong, the 610 Office had been created and started collecting information in preparation for the nationwide persecution officially launched months later.

After the official ban of Falun Gong came on July 20, 1999, the 610 Office organization had a more prominent role—eliminating Falun Gong by directing the actions of the police, the courts, and the procuratorial offices. It oversaw the operation of detention facilities, including the establishment and operation of a large number of brainwashing centers.

Officials forced slanderous propaganda defaming Falun Gong upon practitioners, and attempted to force them to give up their beliefs in a process referred to as “transformation.” This role of the 610 Office was never publicly announced, or even acknowledged, but it existed nevertheless, and its effects were felt far and wide around the country.

In some cases, the 610 Office staffers try to take practitioners directly to brainwashing centers on the day they're released from the labor camps. But with an array of other types of persecution facilities at their disposal, it's not just brainwashing centers that are used. Facilities bearing innocuous signs claiming to be drug rehab centers, legal education centers, and even mental hospitals are routinely used to detain and persecute Falun Gong practitioners. After all, Party officials are masters at the art of deception.

The December 2013 Amnesty International report details how the 610 Office influence supersedes even the legal system in China. While no official will publicly admit it, 610 Office instructions trump all else.

It is estimated that more than 100,000 practitioners were sent to forced labor camps, and the system allowed officials to do so arbitrarily, without the burden of due legal process to slow them down. Many practitioners were illegally arrested and detained, some of them multiple times.

As witnesses and survivors of the persecution, over 100 Falun Gong practitioners who had been tortured in China for their belief joined a public rally in Los Angeles in October 2013. When the master of ceremonies asked for a show of hands of those who had been arrested at least three times, about 80 out of the 100 responded.

The 610 Office usually dictates the length of sentences prior to any court appearance. Despite a lack of legal basis for conviction, many of the prison terms have been over ten years.

Some practitioners are sent to brainwashing centers directly, and others are confined after their labor camp or prison terms expire. As with the forced labor system, minimal paperwork is required to make this happen, and the system is thus often abused. Mental torture is frequently reported to be quite intense. 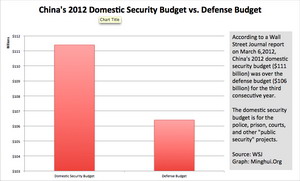 Although the direct victims are practitioners and their families, the enormous cost racked up by 14 years of such persecution has become a heavy financial burden for China and its people.

Furthermore, as the hate propaganda spread nationwide and continued for years, everyday citizens were misled, and public opinion was thus turned against Falun Gong—along with its principles of Truthfulness-Compassion-Forbearance.

None of this would have occurred had the 610 Office not existed. By following the Party to alienate and mistreat a harmless group of people, those responsible have created severe moral obligations that they will sooner or later have to face. Isn't it time to dissolve the notorious 610 Office and allow the key figures responsible for its travesties to be brought to justice?