(Minghui.org) Today's news from China includes incidents of persecution that took place in 15 cities or counties in 9 provinces. In this report, 5 practitioners were subjected to mistreatment during their detention, and at least 37 practitioners were illegally arrested . 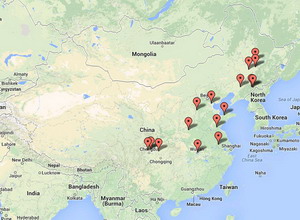 Ms. Liu Chunhong was illegally arrested by plainclothes officers from Wuhan Police Department and sent to Laodong Street Police Station on October 26, 2013, while she was distributing truth clarification materials. She was transferred to Jiangan District Police Department at midnight. She was detained at No. 1 Detention Center in Wuhan on the morning of October 27.

Mr. Feng Lianhua, a retired employee from the Luoyang Institute of Technology, was arrested by 610 Office staff at Jianxi District, Luoyang City on the afternoon of October 28.

Ms. Luo Jie from Shunqing District was clarifying the truth to people on the morning of October 23, when she was surrounded by five to six plainclothes police officers. Ms. Gao Zhijun went to tell them the facts, and both were arrested. They are being held at the Huafeng Detention Center in the Shunqing District.

Mr. Yang Hualong was arrested at home on October 27, 2013, and is currently being held in a forced labor camp.

Ms. Liu Aiqing was arrested and taken to the Dongli Detention Center.

Mr. Song Dianjie was on his way to work on October 29, 2013 when he was arrested by police waiting downstairs for him. He was taken to the Jinhejia Hotel Brainwashing Center.

A group of people from the Zhuqiao Township Political and Legal Affairs Committee went to Ms. Wu Jiangli's home on the morning of October 25, 2013. However, she was at work at the time and not at home. They went to her workplace that afternoon and attempted to arrest her. Ms. Wu tried to jump over the wall to escape, but fell, and her right leg was broken. She was sent to Laizhou Chinese Medicine Hospital.

Fan Hongkai, team leader of the Domestic Security Division, led six to seven officers to break into Ms. Cui Zhanyun's home on the morning of October 28, 2013, and arrested her. She was interrogated and sent to a detention center.

Mr. Xie Chengguo was arrested in Chengdu on October 22, 2013. He is being held at the Mianyang City Detention Center.

Ms. Zhang Shuwei, 49, was arrested by a plainclothes officer and four police officers around October 25, 2013.

Mr. Xiao Zhanghe was harassed at his home by Tianma Township Security staff on October 21. Mr. Xiao was arrested at the township government office the next day. The perpetrators bought lunch for him and served him tea. Afterwards, Mr. Xiao's mind was no longer clear, and they held his hand, forcing him to write a guarantee statement. Mr. Xiao followed along without knowing what he was doing. Mr. Xiao did not realize until October 29 that drugs had been placed in his tea.

Perpetrators from the Tonghua 610 Office harassed Mr. Yang Fujun at his home on October 29, 2013. Afterwards, his manager at work told Mr. Yang that the head of the Dongchang District 610 Office said, “Make Yang Fujun write the 'guarantee statement.' Otherwise, we will send him to a brainwashing center.”

Mr. Ma Mingjie was arrested by officers from the Jianning Street Police Station in mid-October, and his house was ransacked. His whereabouts are unknown.

Mr. Ma was formerly an engineer at Nanjing 14th Research Institute. He browsed the Internet to understand more about Falun Gong in 2011, and later started clarifying the truth on the Internet. He was reported by Internet police to his workplace, and subsequently dismissed from his job.

The political instructor and a driver from Beizhang Town Police Station went to Ms. Bai Bai and Mr. Lian Ting's home in Xiboshan, Xiulin Township on the morning of October 24, 2013. They attempted to extort 2,000 yuan from the couple. Because the couple did not cooperate, they were arrested and taken to the Jingxing County Detention Center.

Teachers and student practitioners were arrested on the afternoon of October 23, 2013, and the school was under a state of siege on October 26. Students were forced to watch videos which slandered Falun Dafa. The teachers and students arrested were as follows: