Fired Nine Years Ago for Practicing Falun Gong, a Middle School Teacher Seeks to Have Her Job Reinstated

(Minghui.org) Ms. Zhao Xianchang is a Falun Gong practitioner from Lianshan Town, Guanghan City, Sichuan Province. Shortly after her illegal arrest in 2004, Guanghan City Education Bureau dismissed her from her job at Guangshan Third Middle School. Ms. Zhao has been requesting reinstatement since her release from the labor camp in 2007, yet the education bureau has turned a blind eye. Without a steady income, she is leading a very hard life by working odd jobs.

A new generation of leaders was recently installed at Guanghan City Education Bureau, and Ms. Zhao once again filed a job reinstatement request. Below is her appeal.

My name is Zhao Xianchang. I was removed from my teaching position at Guangshan Third Middle School for practicing Falun Gong in 2004. The illegal termination of my job has caused significant financial and psychological losses to my family. I have trouble supporting my son and parents. I am now appealing to the new education leadership and requesting that my job be reinstated and I be compensated with all back pay.

I began noticing something strange around May 2004. Wherever I went, I found myself being shadowed. My dorm room on the school campus was burglarized many times when I returned to my own home on the weekends.

When I reported these incidents to Principal Zhou Daomo, he denied any knowledge.

Shortly before my arrest, the shadowing became even more intense and obvious. When I questioned the director of the school, Deng Xiaolin, he bluntly told me that it was because I was the 'ringleader' of the local practitioners. We all knew there was no organization associated with our practice, yet they insisted there was. I had a gut feeling that they were planning to do something bad to me.

I asked my father to accompany me to visit Guanghan City Education Bureau on June 21, 2004. I wanted to ask director Yang Changjin why they sent people to frequently monitor me.

To my surprise, three officers from the local Domestic Security Office--Jiang Tianxing, Zhou Chengshi, and Yang Yongbin--rushed in not long after we arrived. It was obvious that the Education Bureau had asked them to come. I immediately related how they had destroyed my father’s clinic. They got scared and fled.

However, when I returned to school in the afternoon, the school called in the same three officers to remove me from my office.

There is no doubt that the Domestic Security Office, Education Bureau, and my own school were the chief culprits in my arrest. I did not hate them, though, since they were also victims of the persecution, and were only henchmen carrying out the persecution policies.

Interrogated at a Brainwashing Center

The three officers drove me straight to Hexing Brainwashing Center on June 21. When we got there, they put me in a small room and shut the door and windows.

They produced a pile of articles which had exposed their crimes, including the one about the ransacking of my father’s clinic, and tried to get me to admit that I had written them.

Actually, regardless of who wrote those articles, they were all facts. The police officers didn’t dare to own up to their crimes because they didn't want the public to know about them.

I insisted I knew nothing about the articles, but they promised to release me if I admitted I was the author. Thinking about what could happen to me, a woman surrounded by three male officers in a small room, I began to panic and eventually “confessed” against my will that I wrote the article about my father.

To my surprise, they not only didn’t set me free, they sentenced me to three years of forced labor.

I Witnessed the Rape of a College Student, Who Then Had a Mental Collapse

Domestic Security Office policeman Zhou Chengshi and a few others dragged me to a car on July 30, 2004, and drove me to the Nanmusi Forced Labor Camp in Zizhong City.

In the car, I asked to see the labor camp notice, but Zhou refused to show it to me. They "sentenced" me to three years of forced labor, yet refused to show me the verdict. I thought there must be something fishy about it, and that the verdict could well be something they had fabricated without going through any legal procedures. Yet to whom could I appeal in such a society? 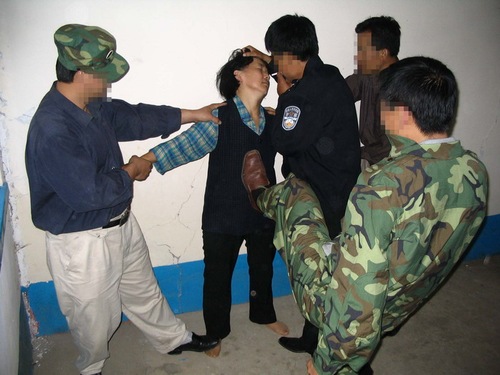 In the camp, a group of thugs and drug addicts cornered me and gave me an intense beating. I lost all my dignity and was brutally abused.

The detained practitioners were under intense pressure every day to say things against their will, and give up their beliefs. Had I not held firm to my faith, I’d have long been driven to mental collapse.

Speaking of the hellish treatment at the labor camp, I once witnessed a young college student raped and beaten by the guards. She eventually collapsed mentally. It was heart wrenching to watch the tragedy unfold before my eyes.

After my release in April 2007, I asked Education Bureau director Yang Changjin numerous times for my job back. Not only did he refuse to honor my request, he threatened to have me arrested again.

When I talked to the Domestic Security Office, Zhou Chengshi also threatened to put me in detention again.

I had nowhere to appeal and have since worked odd jobs to support my son and my parents.

My father used to run a traditional Chinese Medicine clinic, and my older sister and mother worked there as assistants. After the local police revoked my father’s medical license and closed his clinic, both my parents and my sister lost their jobs. My brother-in-law couldn’t stand the financial difficulty and divorced my sister. I myself have struggled to make ends meet after losing my teaching job.

The Chinese Constitution guarantees citizens’ freedom of belief. My practicing Falun Gong violates no laws. It was Jiang Zemin who broke the law by implementing the persecution.

The ordeal my family and I are enduring is just one of many. The Chinese Communist Party spares no efforts in its persecution of Falun Gong, and even dares to commit the unprecedented crime of live organ harvesting.

As practitioners, we do not want to see anyone commit crimes against Falun Gong and be punished, which is why we work so hard to advise people to sever ties with the Party and to stop persecuting Falun Gong. If the evildoers quit the Party and redeem themselves, they will have a brighter future.

I urge the current education leadership to stop following the Party in its persecution of Falun Gong. I ask that you reinstate me and restore my rights. By doing so you are also choosing a bright future for yourself.