(Minghui.org) Falun Gong practitioners and people from all walks of life held a rally on George Street, the busiest area in Sydney on November 2, 2013. They raised awareness about the Chinese Communist Party (CCP's) forced organ harvesting atrocities, and showed their solidarity with 150 million Chinese people who have quit the CCP and its affiliated organizations.

They also conducted a Great Wall of Truth event near Chinatown. The practitioners lined the street, holding banners and display boards to draw people's attention to the brutal persecution of Falun Gong practitioners by the CCP. 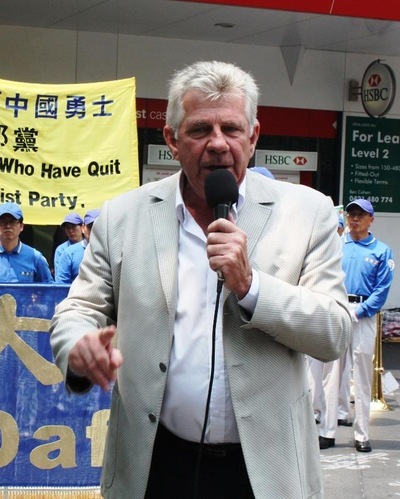 Human rights activist Stephen Sim speaks at a rally in Sydney, expressing his support for150 million Chinese people who have quit the CCP organizations 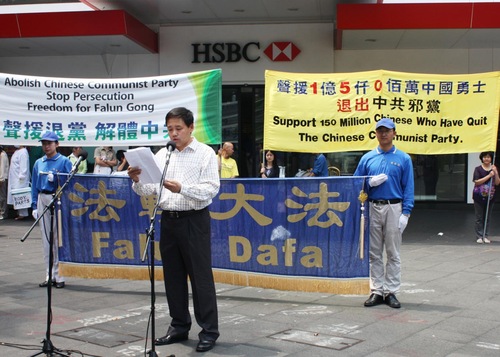 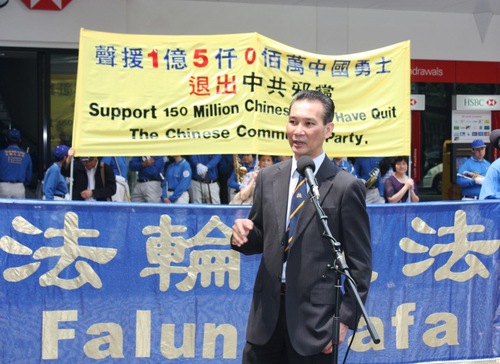 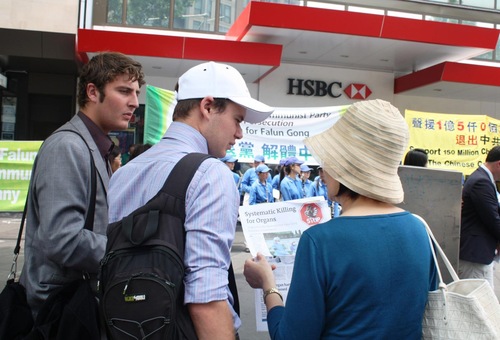 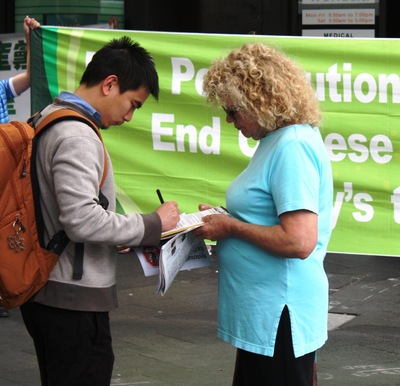 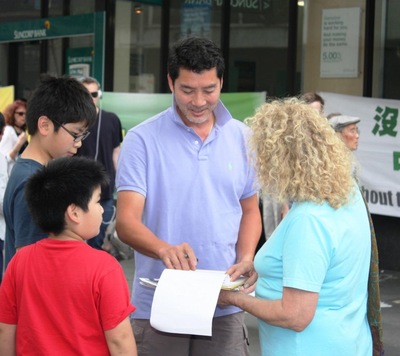 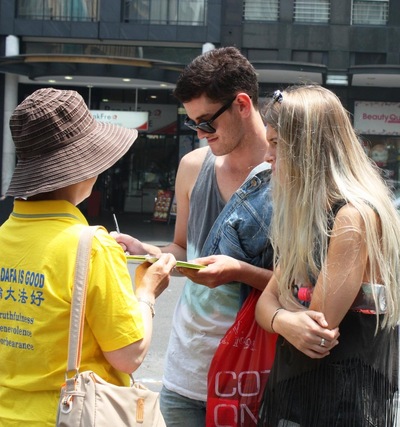 Mr. Li Yuanhua, representative for the Sydney Quit-the-CCP Service Center, expressed his respect and congratulations for the 150 million Chinese people who have withdrawn from the CCP organizations. He said, “Each and every person who has joined in the trend of quitting the CCP organizations is creating history and laying a foundation for their bright future.”

Mr. Li also emphasized that the CCP hasn't stopped its brutal persecution of Falun Gong, and the forced organ harvesting atrocities are still going on. Moreover, the persecution targets not only Falun Gong practitioners, but also most religious groups and people from all walks of life who seek justice.

Mr. Li hoped that more good people will renounce their memberships from CCP organizations. Only by disintegrating the CCP can the persecution stop, can social justice be restored, and can the Chinese nation have a bright future.

Human Rights Activist: We Will Soon Celebrate 200 to 300 Million Chinese People Quitting the CCP, Until We Remove It from China

Australian human rights activist Stephen Sim said, “I am pleased to be here, and I know that over 150 million of people already quit the Communist Party in China. I know I'm going to be standing here or somewhere out there, in this great city of ours, within the next 12 months, we'll be celebrating 200 million people leaving the communist system in China. Then after that will be 250, then about to be 300 million, and then we can say all together, that communism will be removed from China, people will be free...”

Ms. Sun Baoqiang said that the current trend is entire families or groups of people quitting the CCP organizations at the same time. The CCP has to know that its collapse is imminent. Ms. Sun provided several cases of high-ranking officials quitting the CCP with their real names, including former judge Pan Renqiang from Wuhan City Intermediate Court and six military officials who renounced their memberships of the CCP together.

Many Chinese tourists and overseas students passed by the rally site. Some of them took photos with their cellphones, and some signed the petition condemning the CCP's forced organ harvesting atrocities. Many declared their resignation from the CCP and its affiliated organizations then and there.

Two Chinese sisters were drawn to the rally. One of them said that they knew the forced organ harvesting indeed happens in China. Their aunt is a Falun Gong practitioner and is still being imprisoned in Beijing for practicing Falun Gong. Their entire family knows that Falun Gong is good, and is very supportive of it. The two sisters declared their resignation from the CCP organizations.

Another Chinese lady said, “Falun Gong practitioners are remarkable. They've persevered for so many years, and made it through the persecution with their determination.” She continued, “We all support Falun Gong, my entire family has quit the CCP organizations, and I'll tell more people about the quit-the-CCP trend.”