My name is Han Jianping, and I was born on November 27, 1963. At 4 a.m. on June 3, 2013, I got up and saw three strangers chatting outside my yard. I was about to go for a walk but they pushed me down to the ground as soon as I opened the door. They shoved something into my mouth and dragged me into a sedan. I asked them who they were and why they kidnapped me. They replied, “Don't any questions. You'll know it when we get there.”

One was a tall man named Lu Mingxuan. He is the deputy head of the Domestic Security Division in Nongan County. They took me to Fuxiang Apartments which is next to Shaoguo Town Police Station. Lu Mingxuan asked if I knew which floor my wife was on. I said no. Lu said, “We already know.” He had two policemen watch me in the car and went upstairs with other plain-clothes police to knock on the door.

A man who worked for the city police department told two officers to push me into the gap between the front seats and rear seats. Then they pushed the front seats all the way back so that I was locked in the gap. Tang Ke, head of the Domestic Security Division, pinched the inside of my thigh so hard that it turned blue. They were afraid that I would shout out so they stepped on my head and legs. I was hardly able to breathe. It was extremely painful. 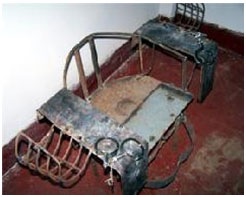 An hour later, I was taken to Shaoguo Town Police Station where they locked my hands to an iron chair. Lu Mingxuan told police to search my body. They found four hundred and thirty-one yuan in cash. Twenty minutes later, Lu Mingxuan came in and put the cash into his own pocket. They did not let me have lunch. I was kept locked in the chair until 1 p.m. Then I was taken to Nongan County Police Department.

Since they arrested me, they never showed any identification documents. Their car did not even have a license plate. On the way to Nongan County, I asked them who they were. They didn't answer. I asked, “Why doesn't your car have a license plate?” One man replied, “We just got it.” I asked, “What? You didn't have a car before? You can get a new one every time?” Then a long silence followed.

After we arrived at Nongan Police Department, I was held in a dark room and locked on another iron chair. A young man watched me. They did not let me talk. About an hour later, at 4 p.m, a head of Domestic Security Division came in and asked, “Who made those banners in your home? Who moved those materials upstairs?” He looked to be in his 30s and had a round face. He was about five foot nine inches tall. I refused to tell him anything. Then he slapped my face four or five times. I felt very dizzy and my face swelled. He asked me again. I said, “I don't know what you're talking about. Why are you beating me?” He said, “I'm beating you because you said you don't know anything.”

Then he told an officer who was in his early twenties to torture me. My hands were handcuffed behind my back. The young officer pushed my head to the ground and took off my pants. They used a mop stick to hit my crotch so hard that it swelled as well. It was very painful and I could not help shouting.

When they were tired, they fastened me to the heating pipes. I had to sit on the concrete floor and wasn't able to move. They left for dinner. Half an hour later, Tang Ke and Lu Mingxuan came back and asked if I said anything. The officer said no. Tang Ke said, “It's fine if he doesn't talk. We have enough people. We'll let others torture him later.” Then Tang Ke told Lu Mingxuan and the officer to push me to the ground. Lu Mingxuan stepped on my legs and the officer pushed my arms behind my back and towards my head. They called it “driving an airplane.” The unbearable pain caused me to shout out loudly. They did this to me three or four times.

An officer took a piece off a wooden chair and used it to press my fingers and ears from both sides. A lighter was used to burn my face and nose. A black plastic bag was put on my face which kept me from breathing. Every time I tried to breathe, the bag got stuck to my nose and mouth. I almost suffocated. I was tortured until 1 a.m. I was next taken to another interrogation room on the first floor in the Traffic Command Center which was behind Nongan Police Department. I was locked in an iron chair again. An officer watched me the entire time. I did not sleep all night.

At 7 a.m, Tang Ke came in with a mop stick. He said, “I had a very good sleep last night. Let me get some exercise by beating you.” Then he used the stick to beat my chest, back and arms. He hit the parts of my body that would cause me the most suffering, such as my knees, shins and ankle bones. I was locked in the iron chair and I had no way to protect myself from the beating.

I asked him, “Why are you beating me?” Tang Ke said, “This is the power of totalitarianism!” He beat me for another ten minutes before he took a break. Then he started beating me again. He did this three to four times. My backbone, arms and neck were all black and blue. When he got tired, he ordered Zhou Dahai to watch me. Tang Ke gave the stick to Zhou Dahai and said, “Go beat him later on!” Zhou Dahai used that stick to beat me for another ten minutes.

I was not allowed to drink or eat anything for thirty-seven hours. At 5 p.m on June 4, Lu Mingxuan and an officer took me to Wugongli Detention Center in Nongan County. I was held there for fifteen days. Lu Mingxuan demanded that I sign a paper promising that I would not appeal.

“74-Year-Old Practitioner: Dafa Is the Source of My Youthfulness and Courage”