Taiwan: Sharing Experiences on Clarifying the Truth to People from Mainland China

(Minghui.org) Over a thousand practitioners from all over Taiwan gathered on the evening of November 23, 2013, at National Sun Yat-sen University to share their experiences in clarifying the facts about Falun Gong to people from China. 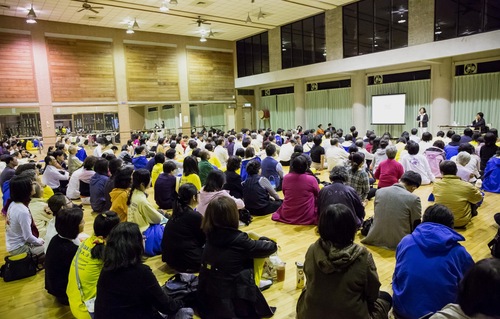 Practitioners from all over Taiwan gathered at National Sun Yat-sen University on November 23, 2013, to share their experiences.

Shijie told him, “I am a volunteer. I have benefitted greatly from the practice and don’t want the Chinese people to believe the propaganda broadcast by the Chinese dictatorship. We are short of manpower and that is why I work in two places.” The tour guide was very moved after learning about the persecution and understanding Shijie's dedication. 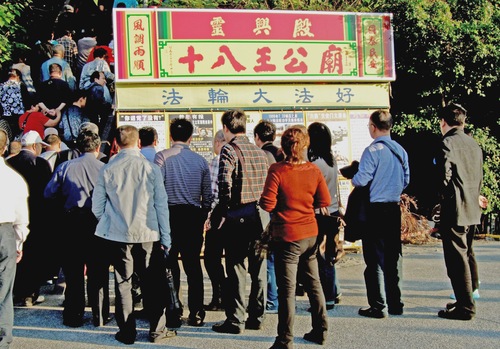 Sizihwan Bay in the Taiwan Strait is a very popular destination and attracts thousands of Chinese tourists each day. Practitioners set up display boards that inform people about the persecution taking place in China, along with the benefits of quitting the Chinese Communist Party (CCP) organizations. Ms. Tsai has ridden her scooter 25 miles to Sizihwan Bay every day for the past 12 years. She considers it her duty to inform the Chinese tourists about the persecution of Falun Gong. She is able to help dozens of Chinese people quit the CCP and its affiliated organizations in a couple of hours.

Eluanbi Park is located at the southern tip of Taiwan, and Mr. Cheng has come across all types of Chinese tourists. Mr. Cheng believes that a practitioner's conduct has a direct bearing on the Chinese tourists’ perception of Falun Gong. On some occasions he is very busy answering questions from a number of Chinese tourists. "What is truly heartening," he said, "is when another tourist who has already understood the facts comes forward and answers the question for the other tourist, thereby helping me clarify the truth." 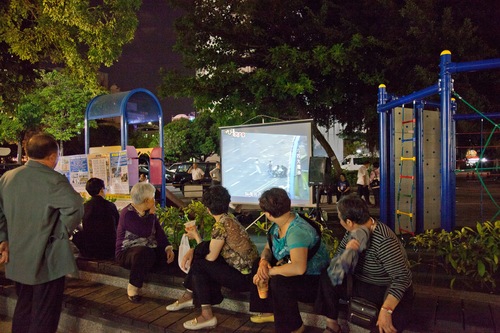 A video about Falun Gong and the persecution draws the attention of many Chinese tourists at Lioho Tourist Night Market.

Many Chinese tourists visit Lioho Tourist Night Market to try for themselves some of Taiwan's famous snacks. A screen near the tourist bus stop plays videos about Falun Gong and the persecution. There are Falun Gong display boards next to it, and many people quit the CCP each day after learning the facts.

Calling China to Curb the Persecution and Rescue Practitioners

Ching, who has small children, calls China from home. She wants to rescue practitioners who are incarcerated and let the Chinese people know the facts. With this goal clearly in mind, she does not get disheartened when she is cursed at or when the other party hangs up. Over time, the number of people who listen to her, and even listen at length, has steadily increased.

Mr. Liu called a lot of prisons in China. Many guards told him, “I admire Falun Gong practitioners. You call night and day.” Sometimes he calls officials and judges and explains the true situation to them. A peasant from a rural village told him, “I can’t believe you called. It’s such a remote place and we just installed this phone.” A lot of them wanted Mr. Liu to tell them more and they took turns getting on the phone to listen to him.

A practitioner once called and heard a woman on the phone say, “Hurry up, there are so many people in our village who want to quit the CCP but don’t know how. Please give me your phone number.” Many people in China are looking for ways to quit the CCP.

Cultivate Oneself Well and Thoroughly Clarify the Truth

Ms. Fu said that only when she studied the Fa well and maintained righteous thoughts was she able to purify herself so that what she said would carry the Fa's energy and her words of truth would touch people's hearts. Before using the Internet to call, she always studies the Fa first. Over the past seven years, she has helped almost 20,000 people quit the CCP and its affiliates.

Ms. Lin once met a person online that said bad things about Falun Dafa. She patiently clarified the truth to him and sent him links to informational videos and the Center for Quitting the CCP. An hour later the person got online again and told her that he’d seen the video and had decided to quit.

Mr. Du is a dentist. He is so busy seeing patients that he chooses to write several letters to China each day. Mr. Du has faxed many flyers to places all over China. A practitioner once called a police department chief and the chief told him, “I received (Falun Gong) flyers a few days ago. Yesterday I got a text message from a Falun Gong practitioner, and today I get your phone call. I know it all!” The practitioner believed that this was the power of practitioners working as one body.

“Overcoming Sleeping In and Being Lazy”