(Minghui.org) It's been six years since Mr. Zhao Xianghai, a Falun Gong practitioner from Xiangtan City, was transferred from the Xinkaipu Men's Forced Labor Camp in Changsha City, Hunan Province to the No. 5 Hospital of Xiangtan. Although Mr. Zhao hasn't broken any laws, he's been kept handcuffed and shackled, and detained at the labor camp. His tragic situation is totally unknown to the outside world. The extreme conditions of Mr. Zhao's incarceration could cause any normal people to lose their sanity and risk mental collapse.

Mr. Zhao Loses His Job for Exercising His Legal Right to Petition for Falun Gong

Mr. Zhao, 43, worked as a crane driver at the Coal Preparation Workshop of Carbonization Factory of Xiangtan Steel and Iron Company in Hunan Province. Mr. Zhao began practicing Falun Gong in 1998, and experienced both spiritual and physical benefits. He became a very kind, honest, and healthy person. He is responsible at work and loves to help others.

The Chinese Communist Party (CCP) began to persecute Falun Gong on July 20, 1999. In 2000, Mr. Zhao went to Beijing to petition for Falun Gong and tell the government about the benefits of the practice. He was arrested at Tiananmen Square in Beijing and later detained at Xiangtan Detention Center. He went on a hunger strike to protest the persecution. He lost consciousness a few days later and was sent to a hospital for emergency rescue. After he woke up, he was released. Mr. Zhao became homeless for a period of time, then went to petition again. This time he was sent to a labor camp for a year and dismissed by his employer.

Put In Labor Camp Again and Sent to Mental Hospital

Mr. Zhao found a job in Guangzhou and went there to work in 2006. While he was on the train to Guangzhou, the police noticed that he was reading a Falun Gong book, and arrested him. He was illegally sentenced to Xinkaipu Forced Labor Camp in Changsha City for an eighteen month term. While detained there, he was severely tortured, both mentally and physically. As a result he became extremely emaciated and weak.

On August 7, 2007, the Xiangtan City 610 Office instigated police from the company where Mr. Zhao had worked to initiate his release on a medical patrol. At that time Mr. Zhao's mother, Li Aihua, was hospitalized. The police used this as an excuse to send him directly to No. 5 Hospital in Xiangtan City, which is actually a mental hospital.

The 610 Office instigated the hospital staff to inject and force-feed Mr. Zhao with unknown substances. He was also otherwise tortured. Already extremely thin and weak, Mr. Zhao's condition worsened. He wanted to get away from this totally inhuman persecution. He once tried to escape by jumping from a window of a room on the second floor of the hospital building, but injured his legs. He endured unbearable pain yet moved slowly but step by step to the road nearby. The moment he started to climb on a bus, the staff from the hospital caught him and brought him back. The staff from the hospital feared that he would escape again, so they put handcuffs and shackles on him. That was six years ago, and he remains in that condition. 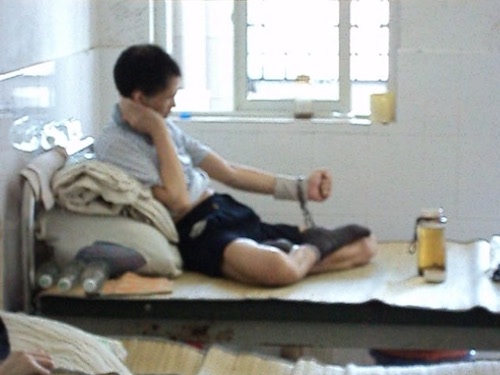 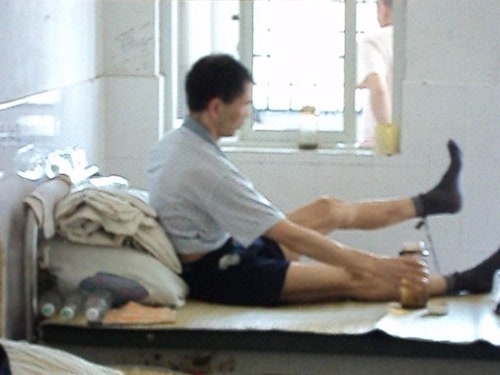 Mr. Zhao Xianghai was locked up at the mental hospital, handcuffed and shackled for six years.

The company that he worked for sent someone to visit him in 2010. That person told him, “If you want to return to work, you must meet two conditions. First, you have to abandon your belief. Second, you must be in good health. Mr. Zhao replied, “I used to be very healthy. You treat me as a psychiatric patient and imprison me here. It's because you inject these drugs into me that I'm a sick and weak person.

"The Chinese constitution clearly states that all citizens have the right to freedom of belief. I cultivate myself according to Truth-Compassion-Forbearance. Is there anything wrong with that? I declare once again: I am an innocent Falun Gong practitioner. I'm a normal person with a clear mind who was once healthy. You must release me and clear my reputation and innocence. You've locked me up here, deprived me of my freedom, not allowed me to appeal, and threatened my mother. You try to wear down my will by locking me in here and to extinguish my life in extreme pain. You are committing a crime! You are committing murder!"

The mental hospital does not allow Mr. Zhao to have pen and paper. They do not allow him to write letters or to have any contact with the outside world. After trying many different ways, with great difficulty he wrote an appeal letter and another letter asking for help on a cigarette box. He also asked someone to bring the cigarette box out and send it to his family. In these letters, he asked his family to contact a lawyer and his friends to try to rescue him. His appeal letter was written on November 23, 2011.

My name is Zhao Xianghai. I used to work at the Carbonization Factory. On August 7, 2007 the Steel and Iron Company of Xiangtan sent someone to transfer me to No. 5 Hospital from Xinkaipu Forced Labor Camp. That was over four years ago. Because I am not a psychiatric patient, I shouldn't be locked up in a mental hospital. Neither should I be handcuffed and shackled to an iron bed. I hope that the related departments will verify and investigate the facts. Please also conduct a legal evaluation and release me. According to the regulations of “Mental Health Act,” the patient can ask for a release. So I now ask for a release from the hospital! Please accord enough importance to my request and maintain justice by helping me.

Mr. Zhao's family and his fellow practitioners sent his appeal letter as well as a letter asking for his unconditional release to the Xiangtan City 610 Office, other municipal units, and the Steel and Iron Company of Xiangtan City. But there was no response.

Mother Tries to Rescue Her Son

Mr. Zhao's mother, Li Aihua, is 65 years old. She traveled several times from Liuyang to Xiangtan to rescue and visit her son at the No. 5 Hospital. Each time she asked to see her son and bring him home. But Xiangtan City 610 Office instigated the Steel and Iron Company and the hospital to prevent Ms. Li from visiting him. They also swindled, arrested, detained, and threatened her.

Earlier in 2008, Ms. Li recovered from an illness and was discharged from the hospital. She was very worried upon learning that her son had been detained in a mental hospital and tortured. She set off from her home town and traveled a long way to the mental hospital.

Ms. Li asked to bring her son home even though she was still weak and recovering from a serious illness. The night she arrived at the mental hospital, the staff told her that it was too late that day, and that she should come back the next morning. When Ms. Li returned the next morning, she was arrested by the police and 610 Office agents, who were waiting there. They took her back Liuyang, where she was detained. The 610 Office threatened and intimidated her. After she went home, they monitored her around the clock.

Chen Shulin, head of Hunan Province 610 Office, came to Xiangtan City on December 19, 2011. That day, Ms. Li traveled from Liuyang to Xiangtan to visit her son. Once again the hospital refused to allow her to see him. The staff scolded her and said, “Zhao's case is special. No visitors are allowed. It's his fault that he practices Falun Gong...” They threw the food that Ms. Li brought to her son on the floor.

Ms. Li noticed that the door of the ward where her son was being held was open, and slipped inside. She saw her handcuffed and shackled son on the bed furthest from the window. When she called out to him, Mr. Zhao saw his mother and tried to walk to her with his heavy shackles. But the medical stuff pulled them apart and dragged Ms. Li out of the ward.

Ms. Li burst into tears. She couldn't help herself and cried out, “Good Heavens! Don't you have children? Why don't you allow me to see my son?! Why do you forbid me from talking to my son?” Her heart was shattered and she was so upset that she began to vomit.

Ms. Li went to visit her son again on March 30, 2012. This time the medical staff searched her without her permission and hit her. They stole all the change in her pocket.

Despite Hopeless Situation She Keeps Trying to Rescue Her Son

Ms. Li kept asking the Steel and Iron Company to bring her son back and give him his job back. When they went to the hospital to pick up Mr. Zhao, the hospital told them, “If you want to take him home, you have to pay the hospital thirty-eight thousand yuan.”

This is a large sum of moneyfor a farm woman, which she did not have. She and her son depended on the little income he earned at the steel plant. After her son lost his job in the persecution, she was broke, with nearly nothing at home. How could she afford to pay this?

Her family is being very strictly monitored by the police. This was a trap set by the 610 Office and the relevant departments. They know an older woman from a village is helpless, so she would have to give up all hope of rescuing her son. Eighteen months has passed since her last attempt to visit her son. She went home but lost contact with the outside world. At this time, no one knows whether she is still alive.

Unreasonable Conditions for Mr. Zhao's Release is Evidence of the Crime

It's clear to everyone that the people who sent Mr. Zhao to the mental hospital are the ones who should be held responsible for all the charges incurred. This crime involved locking an innocent person in a mental hospital and torturing him there. This fact, and the money spent, are indisputable evidence of the Steel and Iron Company and the mental hospital's persecution of Mr. Zhao.

Even a criminal who is imprisoned has limits for the term of the imprisonment. However, Xiangtan City 610 Office, Steel and Iron Company, as well as the No. 5 Hospital demand that Mr. Zhao pay them in order to be released. They've made money a condition of his release.

Mr. Zhao, who is suffering unbearably painful torture and inhuman persecution, while having no help or intervention from the outside world, protests alone. This deplorable treatment could turn him into a real psychiatric patient at any time. We cannot let this happen without taking action. We cannot tolerate this kind of cruelty in silence.

We would like to call on everyone in Xiangtan City to please extend your hands, speak out for justice, punish the criminals who persecute Mr. Zhao Xianghai, and rescue him from the mental hospital! If people all have this righteous thought, it could bring them a bright future. At the same time, we hope that the staff of Xiangtan City 610 Office, the No. 5 Hospital, and the Steel & Iron Company will listen to their own consciences, differentiate between good and bad, repent of the crimes they have committed, release Mr. Zhao, and compensate him for all his losses.

“China Fahui |Doing What a Practitioner Should Do”

“China Fahui | Listen to Master and Save More People”