(Minghui.org) The Warsaw Climate Change Conference 2013 concluded on November 23. As United Nations (UN) representatives and other attendees left the conference, many of them bade farewell to the Falun Gong practitioners stationed outside the building. A group of practitioners have been there since November 19 to offer conference attendees information on organ harvesting in China. They also circulated a DAFOH (Doctors against Forced Organ Harvesting) petition calling upon the United Nations to help stop this crime against humanity.

Practitioners collected about 800 signatures from the representatives of 102 nations and European Union (EU) agencies within four days.

On their way out, some representatives gave the practitioners thumbs-up or even two thumbs-up, saying, “You are great!” “Thank you for what you are doing!” as they waved goodbye. Some had their photos taken with practitioners in front of the DAFOH petition banner. Some asked their colleagues to sign the petition as their last item of business before they went back to their own countries.

During the four-day signature drive, quite a few Chinese officials greeted Falun Gong practitioners warmly, saying, "You have been working hard!" and gave them thumbs-up. 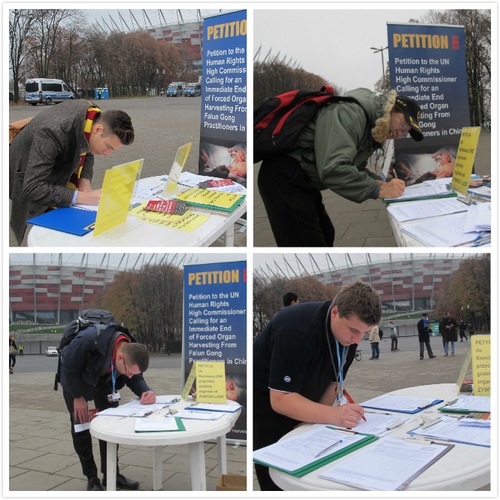 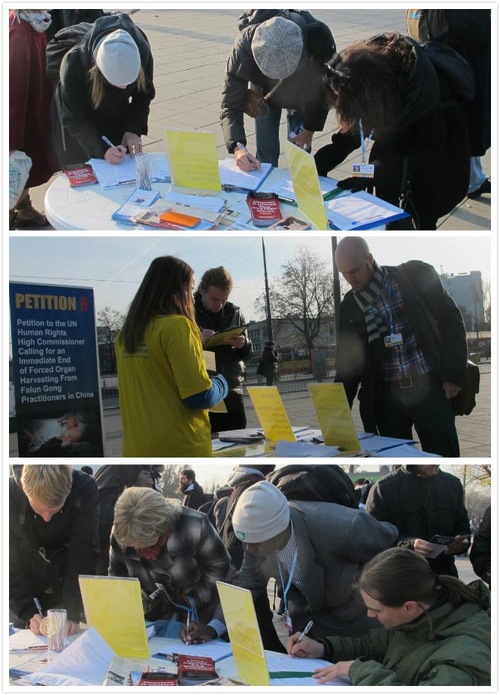 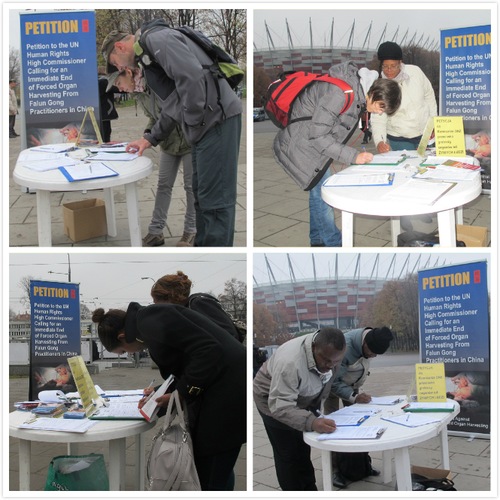 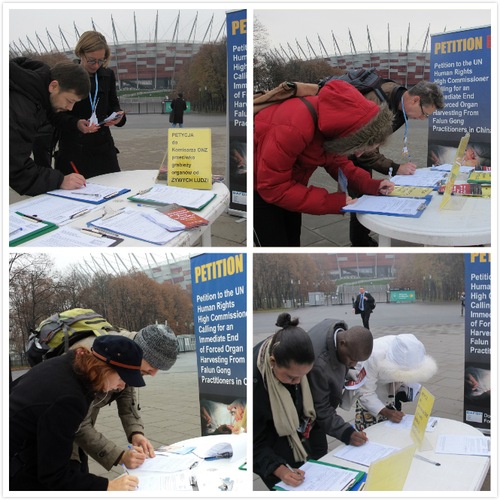 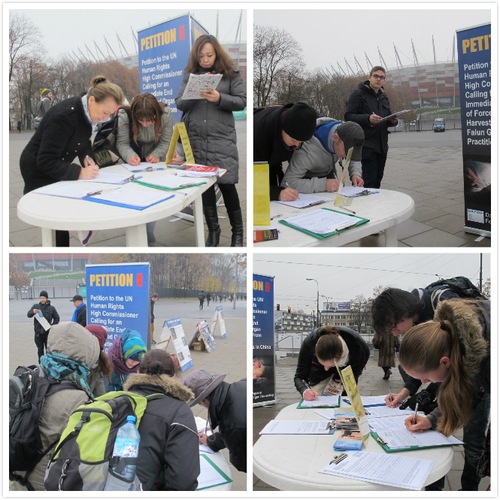 Attorney: Increasing Morality is the Key to Improve Climate

An attorney who joined the conference to work on legal preparation for a new protocol showed a satellite video to a practitioner. The video shows that the entire country of China, except for Tibet, is full of sources of pollution. He said that he was disappointed that nations were not working well together to address the climate issue. Mankind's morality will need to increase before the climate and environment can be restored.

He admired what Falun Gong practitioners did to stay steadfast in their beliefs and be an example of morality and courage. If the Chinese regime is polluting the souls of Chinese by force, how can such a regime clean the climate of its own country, not to mention the world? He signed the petition to do his part.

Interference Highlights the Truth of the Situation

The petition site was surrounded by people during the break in the afternoon of November 22. A Chinese woman suddenly pointed her finger at Falun Gong practitioners and shouted: “Nonsense!” She then quickly ran away.

One practitioner clarified the facts to the rest of the people there and said, “What we are bringing to light is the truth. We make our materials available to the public. However, the CCP doesn't dare allow Chinese people to know the facts. I have heard that there are 400 Chinese representatives to the conference. They are shuttled between the conference and hotel and monitored. Does the CCP dare to let Chinese come and read our materials? Who is creating nonsense and lies?”

This incident actually helped more representatives understand the truth of the situation in China and join the petition.

An American climate researcher has lived in China for two years. He admires the magnificence of Chinese traditional culture. However, he finds that contemporary China bears little resemblance to ancient China. He recognized Falun Gong as part of the traditional Chinese culture and told practitioners in Chinese: “I have heard of Falun Gong in the US. The CCP is destroying the Chinese traditional culture. My signature is also my stance against the CCP. Good luck!”

Falun Gong practitioners played the Falun Gong music “Pudu” and “Jishi” throughout the four-day signature drive. Many representatives were struck by the music and stopped to ask about it.

One representative from an African country was moved by the music. He said that when he heard the Falun Gong music, thoughts such as “meaning of life,” “truth of the universe,” and “grand history” emerged in his mind. He said he couldn't fully articulate his feelings, but knew that he wanted to keep listening. 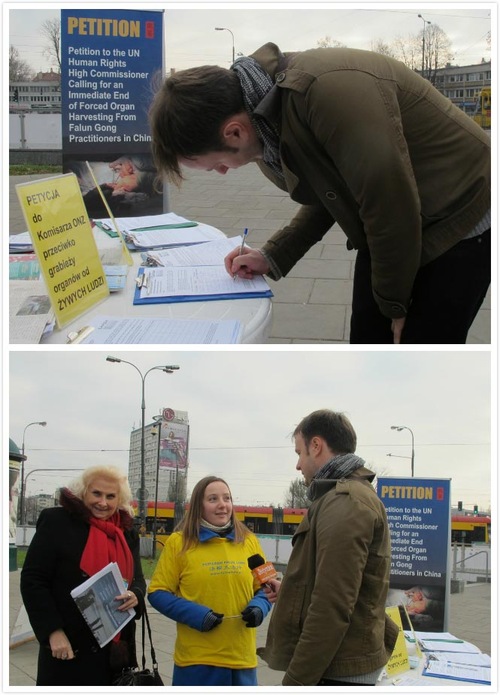 A reporter signs the petition and interviews a Falun Gong practitioner 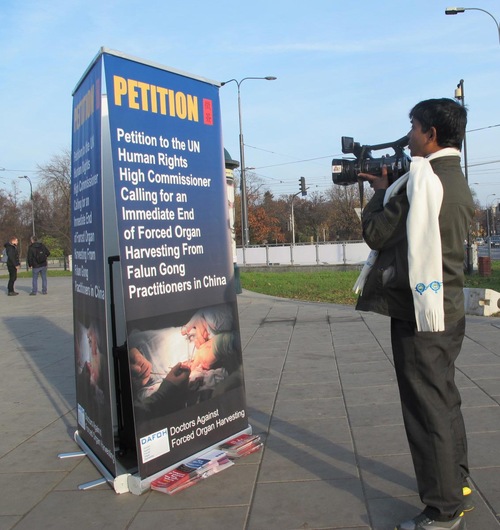 A reporter videotapes the words on the petition banner 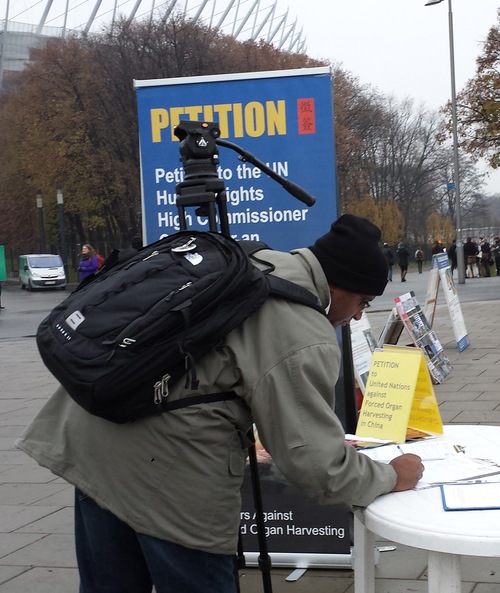 A reporter signs the petition to United Nations