South Korea: Art Exhibit Showcasing the Works of Key Figure in the Persecution of Falun Gong is Held in National Museum, Practitioners Protest

(Minghui.org) The Calligraphy Art Museum at the Seoul Arts Center is hosting an unusual exhibit. It showcases the so-called art works of Li Lanqing, a key figure in the persecution of Falun Gong.

Falun Gong practitioners gathered to hold a press conference and protest in front of the Chinese Embassy in Seoul.

Li committed countless human rights abuses including genocide in his former role as head of the notorious 610 Office. It was under Li's direction that the 610 Office was established and expanded throughout every level of government all across China.

The exhibit, which experts from New York's Metropolitan Museum of Art reportedly termed “amateur," is entitled “Chinese Seal Cutting & Calligraphy Art Exhibit by Li Lanqing.” It is now underway at the Calligraphy Art Museum of the Seoul Arts Center, a facility of national significance.

“A person who has committed crimes against humanity has an art exhibit at the best art venue of South Korea to showcase his so-called works of calligraphy and seal cutting. South Koreans must be indignant when they learn this! Li Lanqing's crimes are even more inhumane than those committed by war criminals tried in various international war crime tribunals. Who organized such an 'art exhibit' and for what purpose? It is ridiculous! We all should go to the Seoul Arts Center to condemn this exhibition and stop it!”

So says Dr. Choi Woo-Won, Professor of Philosophy at the Pusan National University. Professor Choi also sits on the international committee of the Asian Philosophical Association. As such, his statement voices an opinion shared by many South Koreans.

The South Korea Falun Dafa Association (SKFDA) held a press conference in front of Chinese Embassy in protest. They pointed out that the exhibit attempts to deceive South Koreans under the name of calligraphy and art. In fact, Li Lanqing is a criminal who has committed genocide, crimes of torture and crime against humanity. He has been sued in many countries. 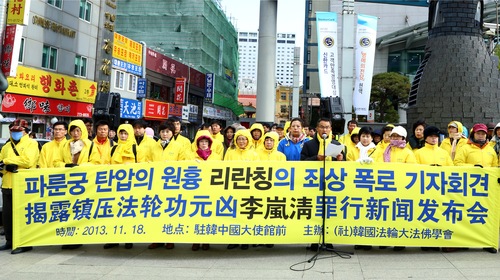 The South Korea Falun Dafa Association (SKFDA) held a press conference on November 18, 2013 in front of Chinese Embassy to bring attention to the crimes of Li Lanqing, former head of the CCP's notorious 610 Office. Banner reads: “Press conference exposing the crimes of Li Lanqing, the former head of “610 Office” and a key figure in the persecution of Falun Gong.”

Li Lanqing did not visit South Korea in person. The exhibit was sponsored by the Chinese Embassy. Zhang Xinsen, the Chinese Ambassador to South Korea, attended the opening ceremony.

An SKFDA spokesperson said, “As former head of the 610 Office, Li Lanqing was one of the most cruel perpetrators in the persecution. He followed Jiang Zemin and actively persecuted Falun Gong right from the start. In a list of 119 persons most culpable in the persecution of Falun Gong, Li ranks in the top five.

“The Seoul Calligraphy Art Museum is the only exclusive calligraphy exhibition hall in the world to display such works. For a human rights abuser who owes many Falun Gong practitioners' blood-debts, to show his work at the venue cheats and disgraces the people of South Korea.”

Li Lanqing has been sued in many countries for his crimes of torture, crimes against humanity and genocide against Falun Gong. The Royal Canadian Mounted Police has put him on their watch list. If he ever enters Canada, he faces the likelihood of immediate investigation.

SKFDA reminded the South Korean government not to allow such a villain to deceive people under the guise of art, and furthermore, to not promote such tyrants.

Investigation , a media outlet in Hong Kong, has revealed that a manager of the Metropolitan Museum of Art in New York was contacted by the Chinese regime. They offered numerous inducements in hopes of securing Li's calligraphy exhibit a spot at the world renowned museum. Experts assessed Li's art and refused the exhibition based solely on the amateur level of his works.

Brief Summary of Li Lanqing's Involvement in the Persecution

Jiang Zemin, who was then head of the Chinese Communist Party (CCP), launched the persecution of Falun Gong on July 20, 1999. Falun Gong, a peaceful and popular spiritual practice, was targeted for, among other reasons, the fact that the number of people practicing it significantly exceeded the number of Party members.

The book The Real Story of Jiang Zemin states that the other six members of the CCP Politburo Standing Committee, the crème de la crème of Party leadership, did not support Jiang's decision to “crack down” on Falun Gong.

Li Lanqing's son was alleged to have embezzled one billion Yuan (more than US$ 160 million). Jiang Zemin waived the charge against Li's son under the condition that Li Lanqing join the persecution against Falun Gong. Li succumbed to the pressure and agreed to support Jiang's decision to persecute Falun Gong. He then became the head of the 610 Office, an extra-judicial Party branch responsible for carrying out the persecution of Falun Gong.

Li Lanqing ordered the persecution of Falun Gong in many fields including science, education and art and forced various levels of party and government officials to participate in the persecution.

At least 3,733 people are confirmed dead in the persecution of Falun Gong, while the true number killed is likely orders of magnitude higher. The Party even sanctions organ harvesting from living Falun Gong practitioners for huge illicit profits, even to this day.

“10th China Fahui on Minghui.org Draws to a Close: Life Shines Through Cultivation”