(Minghui.org) Ai Hongwu, 58, is the chief of Hegang Brainwashing Center in Heilongjiang Province. He is responsible for the persecution of many people, but to outsiders he lies, saying he is "the principal of a law school." Publicly, he is known as the deputy director of the 610 Office in Hegang City, located on the third floor of the Rural Bank of Heilongjiang Province. His wife is ill, and his son works in Shanghai.

Ms. Liu Chunlan was sentenced to seven years in jail due to her faith in Falun Gong. Her husband was sentenced to 17 years. After she was released in 2009, she opened a laundry and tailor shop to support her husband, who was in jail, and a child in college. On the night of March 11, 2011, seven police officers seized her and took her to the brainwashing center, where she was beaten until she fainted. When she was released six days later, she couldn't walk, and her family had to carry her home.

Mr. Liu Zhenchang suffered severe stomach problems, kidney disease, heart disease, and smoking and drinking problems. After he began practicing Falun Gong, all his diseases disappeared. He quit smoking and drinking in seven days. However, he was arrested and jailed for 10 years because he was trying to clarify the facts of the persecution of Falun Gong to those poisoned by the lies of the Chinese communist regime. Although he was severely persecuted, he has never given up his faith.

When Mr. Liu's prison term ended in 2012, he was taken to the brainwashing center by personnel from his residential community and the 610 Office. Mr. Liu didn't eat anything in first week. Guard Zhang Zilong shocked him with an electric baton, saying, “There's no law here nor any set terms.” Mr. Liu's 82-year-old father was bedridden at the time due to sickness and his mother was 78 years old. When his mother went to see him in the brainwashing center, Ai Hongwu and Zhang Zilong didn't open the door for her. His mother shouted his name from outside. When Mr. Liu answered her, Zhang went into his room and started kicking him. So that he could take care of his parents, Mr. Liu went against his conscience and signed a guarantee statement.

Ms. Ren Xiuyun suffered from heart disease and was irritated easily before she took up the practice of Falun Gong. At times she would easily pass out when frightened and was paralyzed with nerve pain. Because of arthritis, she had to wear socks even in the summer. After she started practicing Falun Gong, all her ailments disappeared. She used to be introverted. But she became an open-minded and happy person who enjoyed helping others. She voluntarily cleaned up the corridor that no one had maintained for many years. She even bought paint to whitewash the corridor walls. She had also helped take care of her 80-year-old neighbor who was hospitalized.

In 2013, Ms. Ren was taken to the brainwashing center by four police officers from Lulinshan Police Station. Zhang Zilong threatened to shock her with an electric baton. The guards tried to force her to sign the guarantee statement and made her watch CDs that slandered Falun Gong and write down her "understanding" afterwards. The bag of clothes that her sister sent her was opened and examined by Zhang Zilong. Even her child had to write a guarantee note in order to see her in the brainwashing center. Ms. Ren has been shocked by an electrical baton twice.

Mr. Mo Jianshan was a station conductor before he practiced Falun Gong. He used to suffer from severe rheumatism, gastritis, and allergies. He often had to take medication due to poor health. After he began practicing Falun Gong, all his symptoms disappeared. He stopped taking medicine and regained his health. He used to have a hot temper and often quarreled with his wife. After he became a practitioner, he got along with her very well.

Mr. Mo's wife has suffered great psychological pain as a result of the persecution. She pressured him to stop practicing so he would not be targeted for persecution. One day, she hit him with a broomstick and stopped only until it broke.

On April 18, 2010, when Mr. Mo was working at Mudanjiang Terminal, Gao, a section chief from the Political and Legal Affairs Committee of Harbin Railway Bureau, and a Terminal security guard came into his workshop and ordered him to go somewhere to “study.” Mr. Mo said he didn't want to go.

Mr. Zhou Zhaoxiang was sent to a forced labor camp for a year for clarifying the facts of Falun Gong. Because the labor camp closed down, all detainees should have been sent home, but Mr. Zhou was sent straight to a brainwashing center without his family being informed. His 80-year-old father, who has cancer, is currently alone at home with no one to take care of him. When his sister went to see him in the brainwashing center, Zhang Zilong shocked her with an electric baton.

When practitioners condemned Ai Hongwu for his illegal acts and persecution of Falun Gong, he retorted, “The Communist Party says no laws needed to be followed for Falun Gong practitioners.” Zhang Zilong addd, “There is no law here!”

Ai Hongwu has worked for the 610 Office and participated in the persecution of practitioners for many years. He has violated Articles 251, 246, and 247 of the Criminal Law. He has deprived citizens of their freedom of belief and illegally detained and tortured them. 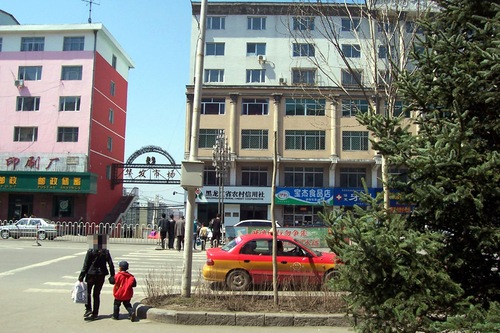 Hegang Brainwashing Center is on the third floor of the building across the street from the Hegang Water Company. Metal webbing covers the windows.