(Minghui.org) Judith Woodman, a city councilor in the capital city of Cardiff, Wales, was invited to attend the opening ceremony of the The Art of Zhen, Shan, Ren (Truth, Compassion, Forbearance) International Exhibition on October 14, 2013.

Ms. Woodman, who is also the leader of the Liberal Democrat Group on the Cardiff Council, carefully looked at each of the 60 paintings. She said that she was deeply moved by Falun Gong's plight, almost as if it were happening to her, personally. 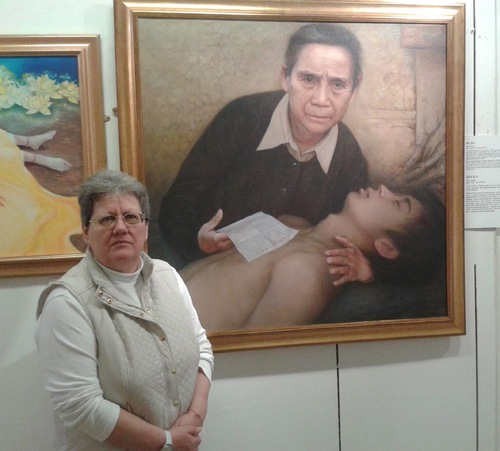 She said that she was touched most by the painting My Son , which depicts a pained and grieving mother, holding the body of her beloved son, who had died shortly after being released from prison for practicing Falun Gong.

Thousands of Falun Gong practitioners throughout China have experienced similar fates, that is, prison authorities often send brutally tortured victims home to die, in an effort to avoid culpability.

Councilor Judith said, “As a mother, I have to ask myself: 'If something like this happened to me, how would I feel? How would I respond?'”

She said that she appreciated how each painting that depicted the Chinese Communist Party’s (CCP) persecution of Falun Gong, invited the viewer to take part in the artist's sorrow, grief, and hope, so that they, too, would know how it feels to be persecuted for one's beliefs.

“The painting, Organ Crimes , made me aware of the most shocking crime in the history of man: live organ harvesting!” she exclaimed.

“In the 1980s, prisoners’ organ were utilized for organ transplants, however, according to reliable investigative reports, when the CCP’s persecution of Falun Gong began in 1999, the Party gave the order to kill and harvest the organs of thousands of practitioners.

“This despicable practice, which is incomprehensible to civilized human beings, must be stopped! It is truly a crime against humanity. The perpetrators have absolutely no moral or ethical code of conduct.”

When she went home, she wrote a long email to a friend of hers who practices Falun Gong. “If the persecution happened to me, what would I do?” she wrote. She told her friend that she “must do something to help stop the persecution.”

Two weeks later, Ms. Woodman accepted an invitation from Radio Cardiff's “Big Scott,” a well-known Welsh radio presenter, to do a live interview about The Art of Zhen, Shan, Ren International Art Exhibition, which was being held in her home city.

The councilor said that the exhibition made her very happy to be a politician, as she was in an ideal position to speak up for the injustices that she sees around her and to preserve righteous, traditional values.

She cited a quote that Lord Mayor of Cardiff said at the opening ceremony of the art exhibition: “I believe everyone who views this exhibition will be moved as long as they are a human being.”

She implored everyone to “clearly distinguish right from wrong, uphold the rights of individuals, and to stand up to any form of persecution that violates human rights.”

The councilor encouraged the radio listening audience to visit the exhibition in order to learn more about Falun Gong and the CCP's persecution of this peaceful meditation practice. 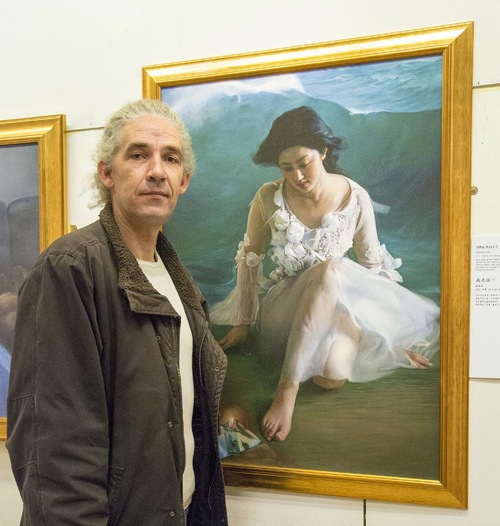 “Big Scott” from Radio Cardiff, said that he was deeply touched by the exhibition.

“Falun Gong practitioners, both young and old, are being persecuted in China,” Ms. Woodman explained. “The CCP is not sparing anyone.”

“I’m feel very lucky to be able to live in a country that protects the freedom of speech and belief. If I choose to practice Falun Gong, I can, and I would not have to live in fear or worry that my family members would be taken away from me in the middle of the night.

“As a mother, I’ve always taught my children to have the courage to stand up—and when necessary—challenge and oppose immoral behavior. I also taught them not to be afraid to express their views in a rational manner, so that as a society, we can make progress.

“My father passed these core values along to me. He fought for many of the freedoms that Britons are enjoying today. This is how it is supposed to be. I hope that all Chinese people will one day be able to enjoy the freedom of belief and the freedom of speech.”

Many visitors said that they were deeply touched and inspired by the exhibition, which concluded on November 6.