(Minghui.org) The Jianyang Court in Sichuan Province tried seven Falun Gong practitioners on October 18, 2013. The practitioners' attorneys were barred from attending the trial. The trial was finished in an unprecedented four hours, with the practitioners receiving heavy sentences. Ms. Wang Hongxia was sentenced to a 12-year prison term and Mr. Ye Jianguo received an eleven-and-a-half-year term.

Insiders confirmed that the so-called trial was only a formality and the verdict had been made long before. This “big case” has dragged on for six months. It exhibits all the illegality, ignorance, and shamelessness of the judicial system, Procuratorate, and law enforcement personnel of the Chinese Communist Party (CCP). They violated the law while executing the law: illegally arrested people, tortured and interrogated, manufactured evidence and deprived the defendants’ of their right to defend themselves.

A participating official admitted privately, “The case of Ms. Wang and others are related to Falun Gong; it's impossible to really find them guilty. Reading from the files, it was no different from those cases prosecuted during the Cultural Revolution.”

All seven defendants are innocent, upstanding people, yet they were arrested and received long prison terms. The seven practitioners are Ms. Wang Hongxia from Anyu, Mr. Ye Jianguo from Longchang, Du Zhongxuan from Jiangjin in Chongqing City, and Wang Ying, Zeng Pingshu, Mr. Ma Daiheng and Diao Qixiu from Jianyang. Most of the defendants are in their 60s or 70s.

The other six practitioners were held in the Ererhu Brainwashing Center for as long as four and a half months. There they were tortured during interrogation. Some were deprived of sleep for several consecutive days and nights, and some were handcuffed and hung up. The Domestic Security police even threatened that they would bury them alive or break their legs if they did not “comply.”

Ms. Wang Hongxia, around 50 years old, was an English teacher in the Anyue Teacher’s School. She was the main defendant in this trial. Ms. Wang followed Falun Dafa's principles of Truthfulness-Compassion-Forbearance because she strived to be a good person.

After she learned Dafa, Ms. Wang's physical and mental health improved greatly. However, because of her steadfast belief in Dafa, she was persecuted by the CCP for a number of years. She was imprisoned many times and sent to forced labor camps three times, where she was tortured. Unable to teach anymore due to the persecution, she eventually made a living selling tea.

The 610 Office and the National Security agents in Chengdu City arrested Ms. Wang again in Shuangliujiujiang, Chengdu City on June 9, 2011.

Mr. Ma Daiheng, 76, was a resident in Jianyang City. He is a kind, older gentleman. He was a farmer and also was a teacher when he was young. He formerly suffered many illnesses but after he began to practice in Falun Dafa he returned to good health. He followed the principles Truthfulness-Compassion-Forbearance. The Jianyang Domestic Security police broke into his house on July 28, 2012, arrested him, and ransacked his home. He was taken to the Ererhu Brainwashing Center.

The families of the seven practitioners retained lawyers to defend their loved ones. The court notified the practitioners' families that each defendant could have only one family member attend the trial. On October 16 and 17, five attorneys went separately to the Ziyang Detention Center and tried to meet with their clients before the trial. However, the detention center had been notified by authorities not to allow it, claiming that they needed permission from the police department. The attorneys went to the city district office to complain.

The trial was held on October 18 in Jianyang City. On the day of the trial, the town was on full alert. Traffic was blocked off a long distance from the court. Special teams with armored vehicles were dispatched to stand by, and the police photographed people in front of the court. 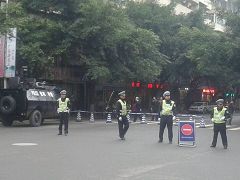 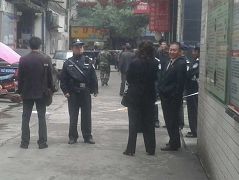 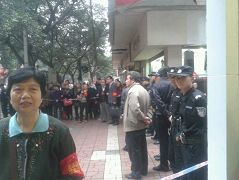 During the trial of the seven practitioners, the streets were blocked, with a large police force outside the court

The court ordered the attorneys to be searched and were told that they could not bring their computers and cell phones into the courtroom. The attorneys objected and thus were barred from entering the court. The court went into session at 11:15 a.m. without the presence of attorneys. When the family members came out of the court during the recess to check on the situation, they were not allowed back into the courtroom.

The court case, with seven defendants and 2,000 pages of files, ended abruptly that afternoon, with the defendants receiving heavy sentences. It is yet another tragic example of the shameful judicial system in China under the CCP.