(Minghui.org) The Art of Zhen Shan Ren International Exhibition opened in Zurich, Switzerland, on November 1, 2013, and will be on display for the next six months.

Silvia, one of the exhibition visitors, commented on the paintings depicting the Chinese Communist Party's (CCP) persecution of Falun Gong, saying that they "give people hope,” even though the victims in the paintings are being tortured. She said that the paintings carried a powerful message: "Be brave, have courage, and hold strong to your beliefs!”

Silvia asked many questions about Falun Gong and the persecution. She said that she would do a thorough online search about the practice and commented, “I hope that the practitioners in China persevere in their belief and that more people will support them.” 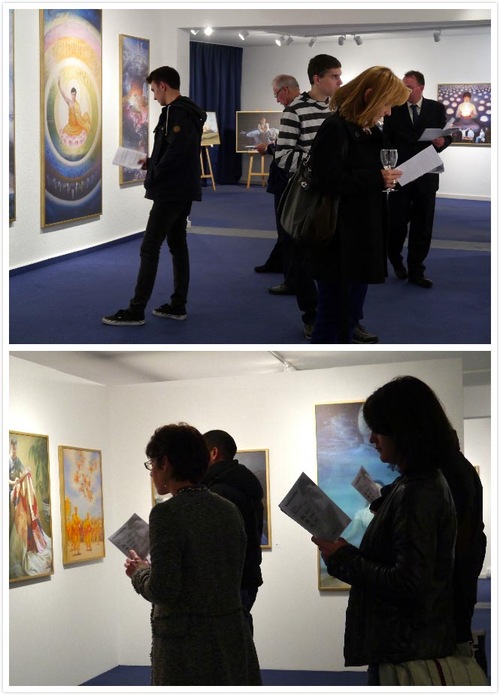 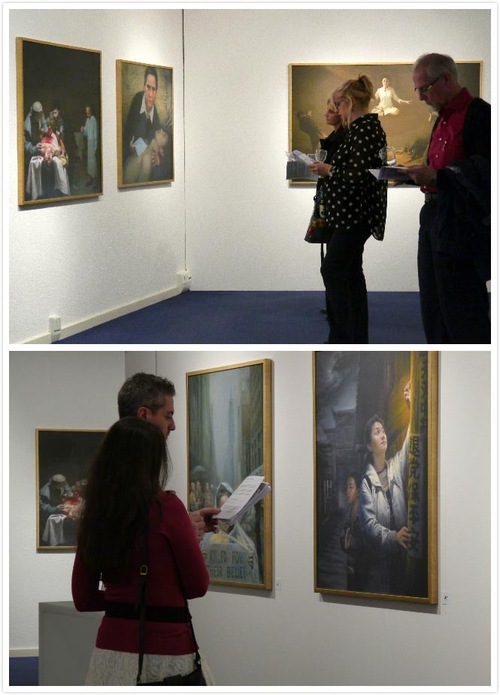 Visitors appreciate the inspiring messages in the paintings.

As two Chinese students passed by the brightly lit exhibition hall, they noticed a painting of the Buddha and decided to come in and look around. As they were leaving, one of them said, “We had a very rewarding experience, and it seemingly happened by chance!”

The Paintings Radiate a Sense of Optimism

Although some of the themes of the paintings are deep and serious, Alfredo, one of the visitors, sensed a feeling of optimism in each one. “The colors are so beautiful that it makes people feel optimistic and comfortable,” he explained.

He said that he hopes that Falun Gong practitioners will be able to hold true to their beliefs and never give up.

“I am going to invite my friends and family to the exhibition so that they, too, can learn about the persecution in China, he said.

Mr. Claude, an engineer, said, “The paintings clearly show the CCP's assault on human rights. I found it particularly disturbing, especially the painting of the little girl who lost her father to the persecution ["I Want My Daddy"]. I was deeply moved.

“The paintings depicting China's organ harvesting crimes were especially shocking, because the victim's organs were removed from their bodies against their will and without anesthesia. I'm surprised that a lot of people don't know that this persecution is still going on. The cruelty exhibited by the perpetrators in the paintings is beyond my wildest imagination.”

Before leaving, Mr. Claude asked for some informational materials about Falun Gong and the exhibition, saying that his friends would surely be interested in viewing the paintings, too.

Many visitors said that they were deeply inspired by the Falun Gong practitioners rendered in the paintings, saying things like: “It looks like they will never give up their belief” and “The practitioners seem very determined and optimistic.”

One man was full of praise for the exhibition. “These paintings are so expressive and so full of emotion!” he enthused. “Their beauty has left a deep impression on me. I like the different styles and superb skills of the artists. Outstanding!”

“I Really Feel Inspired by the Paintings!”

A young man said, “I think the artists have accurately expressed both the pain and dignity of the Falun Gong practitioners in the paintings. Although the practitioners are obviously suffering, the artists chose to use a peaceful way to get their message across. I think it takes consummate skill to pull this off.

“I can feel from the paintings that Falun Gong practitioners are extremely firm in their belief and that they will never give it up. This is particularly inspiring.

“Their philosophy seems to incorporate the ideas: 'Never give up your belief!' and 'Don't waver; persevere to the end!' When I see people being so faithful to their beliefs in spite of being brutally tortured, I am really inspired!”

“As More People Get Involved, Changes Are Inevitable”

Many visitors said that will ask their friends and family members to come see the exhibition, and that they, too, would see it again.

One man said, “Even if we cannot correct the majority of human rights violations in China, as more and more people get involved, changes will inevitably take place on a smaller scale.”