Giving His All to Seek Justice for Falun Gong

He explained, “I wasn't a lawyer who specialized in human rights, nor in criminal issues, but the situation of the persecution of Falun Gong really went straight to my heart. When I realized the extent and I began to see and speak with more people about the tragedy that China was living with, the persecution of so many millions of innocent people because of their spiritual beliefs, good people who tried to raise themselves with their behavior, their morality, their attitude towards others, being benevolent people, all this went straight to my heart.

“I couldn't understand how it was possible that millions of people were being persecuted just for being good people, being honest people, being good citizens in China. All this changed my plans.”

Mr. Iglésias continued, “But when I interviewed some of the victims, Dai Zhizhen and her daughter Fadu, I really shed tears when they described the persecution of her husband. This little child became an orphan simply because her father was a good person. This stirred me so much inside that it completely changed my mindset.

“I changed overnight from being a combative corporate lawyer who always looked for the most profit.” He continued, “I decided in my heart that I had to put all my strength, all my effort, all my determination, all my passion into bringing justice to the millions of practitioners of Falun Gong in China who are being terribly persecuted by a bloody dictatorship, by an evil dictatorship that is the Chinese Communist Party (CCP).

“All these years, the only thing I have wished is that the practitioners of Falun Gong, these good people, can carry out their beliefs for the rest of their lives because they have decided to be better persons. This is what moved my heart and what motivated me to do this.

“The only motive, the only reason I have, is my sincere hope – nothing else.”

“In China there is no independent justice. The lawyers who know how the Chinese judiciary system works are aware that it's totally controlled by the Chinese Communist Party. Therefore it´s impossible for there to be justice in China in regards to the persecution of Falun Gong,” Mr. Iglésias said.

“But in Spain and in other countries governed by the rule of law and where justice prevails, it can be done. We need to carry out that justice against the perpetrators, who have committed the worst crimes against humanity.”

More than seventy cases have been filed by Falun Gong practitioners in at least 30 countries, charging the perpetrators with genocide, torture, and crimes against humanity, holding the CCP officials accountable for what they have done.

Mr. Iglésias introduced the first criminal lawsuit filed in Spain against former communist leader Jiang Zemin in 2003. Jiang is widely acknowledged as the initiator and primary driving force behind the campaign launched in 1999 to “eradicate” Falun Gong. Also facing charges of genocide and torture in the Spanish case is Luo Gan, former head of the 610 Office.

Since then, more lawsuits have been filed against the criminals who have participated in the persecution of Falun Gong. In particular, against Bo Xilai,Wu Guanzheng, Jia Qinglin. In total, five high-ranking officials have been sued for their crimes in the persecution of Falun Gong. The cases have been set for investigation by the Supreme Court of Spain and by the Constitutional Tribunal of Spain, according to Mr. Iglésias.

A considerable amount of evidence has been provided, including testimonies of the victims, independent reports from Human Rights Watch and Amnesty International, as well as reports from the European Parliament and the United Nations Human Rights Commission.

Mr. Iglésias said, “The next step is to have the Supreme Court of Spain review the report by David Matas and David Kilgour about the CCP's forced organ harvesting, to decide whether to incorporate this additional evidence in the existing lawsuits.

“If some of the sued individuals – Jiang Zemin, Luo Gan, Jia Qinglin, Wu Guanzheng, or Bo Xilai – were to visit Spain or any other European country or any country with which Spain has an extradition agreement, we would directly demand of the judge that this person be arrested. We would ask that the judge order an international arrest warrant to arrest this person in that country and he would be brought to Spain to be tried.” 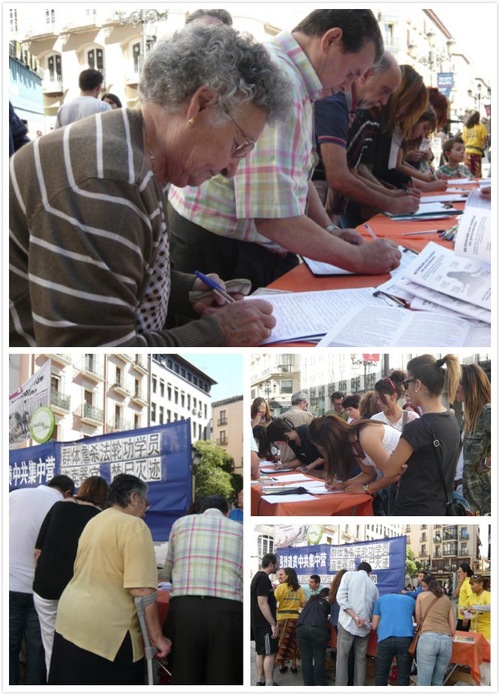 Spaniards sign a petition against forced organ harvesting in China to show their support for Falun Gong and the Chinese people on Plaza del Pilar in Zaragoza.

Since coming to power, the Chinese Communist Party has turned into the largest and most cruel dictatorship in the history of humanity. Mr. Iglésias said, “More than 80 million people have been killed under the CCP's dictatorship.”

Mr. Iglésias said that the CCP kills its own people, removes the organs of living people, practitioners of Falun Gong, and makes money from it. They have generated a multi-million-dollar business and all the profits go to the leaders of the CCP.

He added, “Never before in human history was there such an evil persecution which used all the resources within reach of a terrible dictatorship, as this dictatorship of the CCP.

“I really feel that they can't possibly be human, committing these terrible crimes against humanity,” Mr. Iglésias said.

He emphasized, “All these CCP criminals must be brought to justice.”

Mr. Iglésias said, “I believe in the inherent justice of the court, and I believe in universal justice. No genocide, no torturers, can do these terrible crimes and expect to get off unpunished.

“The dictatorship of the CCP won't last much longer,” he added. This is the message of hope that Mr. Iglésias wants to transmit to the Chinese people.

He expressed his admiration for the Chinese people for their 5,000 years of history.

He said, “The 70 years of the CCP's dictatorship is a drop in the ocean of all the years – thousands of years, of that culture and the ancestors of the Chinese people.”

“That is my wish and that is my heart: to bring back to Chinese people their true dignity, their true freedom and their true essence, outside, apart from this terrible dictatorship.”

A Call to End the Terrible Crimes against Humanity

Related article: Table of Lawsuits Filed Against Former Chinese Leader Jiang Zemin and His Followers by Falun Gong Practitioners around the World (From 2001 to August 2004)