(Minghui.org) On October 28-31, 2013, the Art of Zhen Shan Ren International Exhibition was held in the Bondi Junction Library, in Sydney, Australia. The four-day event was well attended and many visitors expressed their support and appreciation.

City Councilman: “We Are Always Happy to Host Your Art Exhibition” 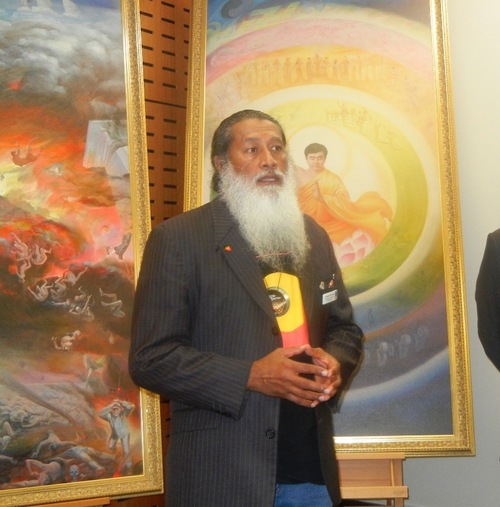 “I'd like to thank the exhibition organizers for coming here to share their artwork with us tonight,” said the councilman. “I hope that Falun Gong will be able to resist the persecution until it ends.

“If you ever feel that this community or the council can be of further assistance to Falun Gong, please let us know. We are happy to host additional exhibitions for you, or other events that help fight against the Chinese regime's persecution of Falun Gong. So thank you very much for coming and sharing your paintings with the citizens of Waverley!”

“These Paintings Are Based on True Stories!”

Ms. Zhizhen Dai was invited to participate in the opening ceremony. She told the exhibition attendees that she was the mother in the painting, I Want Daddy. One person exclaimed, “Oh, she is the woman in the painting! I didn't know that these paintings are based on true stories!”

Ms. Dai's husband, Chen Chengyong, was tortured to death in 2001 by Chinese Communist Party (CCP) thugs for practicing Falun Gong. Their daughter, Fadu, was only one year old when her father passed away. Now, she has grown into a young lady and yet the mission she and her mother share continues.

“I hope that this persecution ends very soon so that others won't need to suffer as my family did,” said Ms. Dai.

Mark, a local teacher, wrote in the exhibition guest book, “Keep spreading the word about Falun Gong!” He later asked for some Doctors Against Forced Organ Harvesting petition forms, which call on the United Nations to help stop the Party's organ harvesting of living Falun Gong practitioners in China. “I will ask my school staff to sign the forms to show their support for Falun Gong,” he said.

A university student brought several of her friends to view the exhibition. She told a tour volunteer: “Yesterday, I signed the petition. Today, I invited my friends to see the beautiful paintings and to learn about the Chinese regime's crimes against humanity.”

A local couple, Val and Helen, as well as their niece, Alainya, and her fiance, carefully viewed the paintings. They later thanked the volunteers for their time and efforts.

“Thank you for sending us a flier in the mail,” said Helen. “If you hadn't sent it, we probably would never have known about the exhibition nor the persecution of Falun Gong.”

“I've worked in libraries for most of my life,” said a teary-eyed librarian, “and I can tell you that these are the most beautiful paintings I've ever seen. I can feel what the paintings are trying to say! Viewing the paintings is like being in heaven; I don't want to leave. The feeling is hard to express in words.”

Many visitors praised the paintings and condemned the persecution in their guest-book comments. Some people encouraged the practitioners to hold more exhibitions around the world. Others expressed a keen interest in learning the Dafa exercises and reading the main book of Falun Gong, Zhuan Falun.

“Disintegrating Brainwashing with Righteous Thoughts and Belief in Master”