(Minghui.org) Wang Mingyu, head of the Chaoyang City Communist Party in Liaoning Province, recently gave secret orders to Chaoyang police regarding persecuting Falun Gong. He told them to beat and mistreat practitioners without talking about it. Wang's order has now been passed down to every office.

The file number of the order document is 43 and came from the Chaoyang Police Station. It's dated September 16, 2013. Regarding the campaign to persecute Falun Gong, which involves about 1000 police officers locally, Wang wrote, “This persecution effort is long-lasting and needs to be effective.”

He told them, “Plan well, increase the intensity, and reduce publicity.” More specifically, he instructed the officers to beat and mistreat practitioners without talking about it or telling anyone. This document was distributed by the Chaoyang Police Department on September 18. 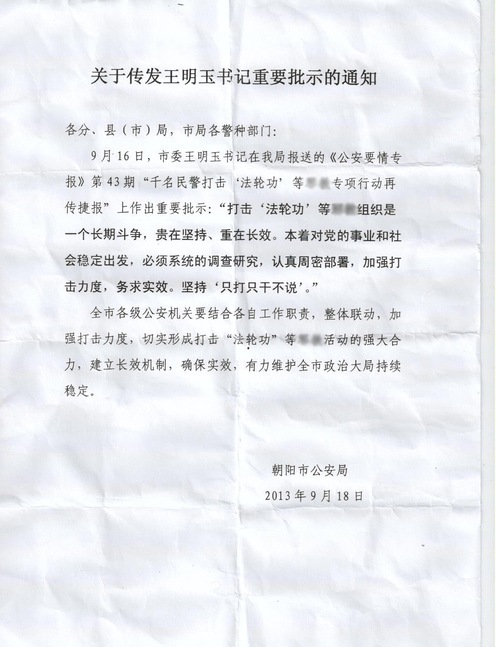 Wang was born on October 29, 1964. He was appointed Chaoyang deputy mayor in August 2010 and was later appointed mayor. He became the city's Party head in January 2013. It's been documented that he gave orders to mistreat Falun Gong practitioners while he was mayor.

Several practitioners were also illegally sentenced and imprisoned. For example, Lingyuan City court sentenced practitioner Ms. Du Qingxiu to six years on April 12, 2013. Ms. Du appealed and Chaoyang City Intermediate Court held a second trial on July 11. During the trial, Ms. Du told the spectators that she was innocent, hadn't violated any laws by telling others about the persecution of Falun Gong, and asked to be released.

Shuangta Court tried 61-year-old Ms. Chen Guilan on August 9. Her attorney made a strong defense, but the judges still sentenced her to 7 years.

“Families Suffer Along with Falun Gong Practitioners in the Persecution”