(Minghui.org) On October 6, 2013, the South Korea Falun Dafa Cultivation Experience Sharing Conference was held at the Youth Town Assembly Hall, near Mt. Songnisan in Songnisan National Park. Falun Gong practitioners from across South Korea attended the conference to share experiences and encourage one another in all aspects of cultivation practice. 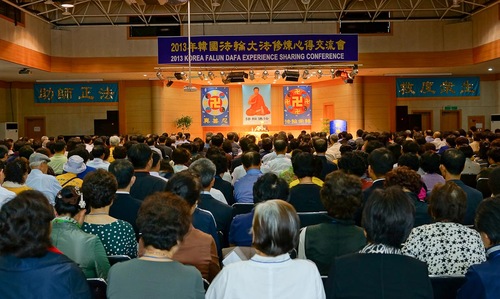 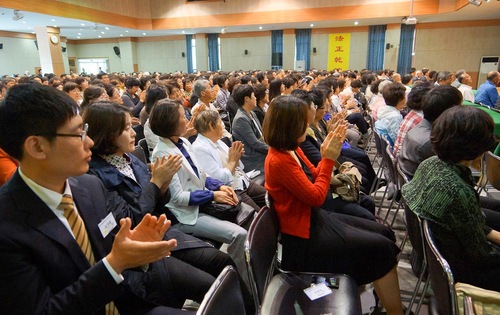 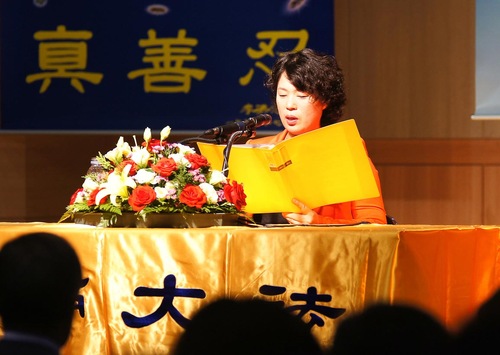 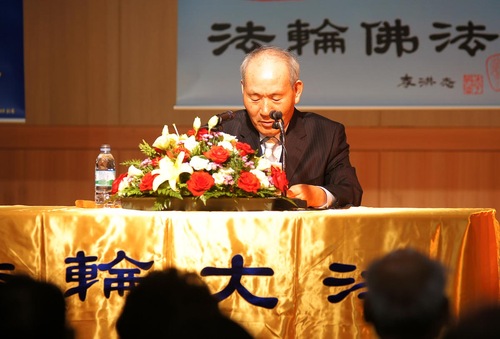 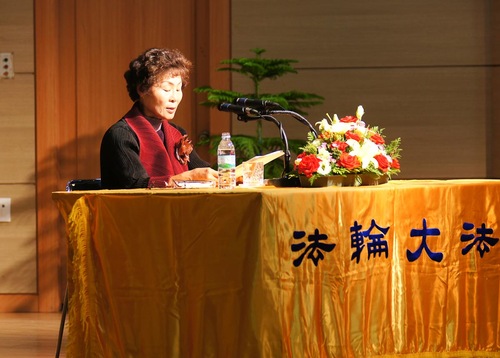 After practicing for two months, Mr. Lee's celestial eye opened. “I saw many marvelous scenes,” he said. “I felt that my body had become as pure as an infant's body. One day, while reading Zhuan Falun , every word in the book appeared golden in color. When I practiced the meditation exercise, I saw myself sitting on white clouds under the blue sky, while watching the universe from above. It was marvelous.”

Mr. Lee said that his wife came from a family of four generations of devoted Catholics. His wife initially objected to him practicing Falun Gong and threatened to divorce him if he continued. Finally, however, his righteous thoughts and compassionate attitude touched both his wife and family.

“My wife has not taken up the practice, but if she hears someone slandering it, she tells them, 'It is a practice of both mind and body and it has its own features. If you haven't practiced it, don't criticize it.' She actively safeguards Dafa. When it's time for me to send righteous thoughts, she kindly reminds me.”

Over a Period of Two Years, Practitioner Helps 15,000 Chinese People to Quit the CCP

Mr. Ko, from Seoul, started practicing Falun Gong in June 2011. Soon after he began the practice, he shared understandings with his fellow practitioners. Through these discussions, he realized the importance of clarifying the truth and saving sentient beings.

Since then, Mr. Ko has made great efforts to talk to Chinese Koreans visiting South Korea about Falun Dafa and the persecution in China. He helps dispel the lies perpetrated by the Chinese Communist Party (CCP) and helps them quit the CCP and its affiliated organizations. “Initially, things did not go very smoothly,” he explained. “I helped only one person to quit on the first day, two on the next day, then three on the third day. In one week, over 10 people quit the CCP.”

With his fellow practitioners' help and encouragement, he did not give up. “Now, I advise 20-30 people—and sometimes up to 100 people a day, to quit the Party,” he said. “To date, I have helped more than 15,000 people quit the CCP.”

Mr. Chin, from Chungcheongnam, said that he has always been interested in religion and qigong. “But now I only practice the Great Law or Great Way of Falun Dafa, which can save all people,” he explained. After he read Zhuan Falun online in 2008, Mr. Chin understood why he came to this world.

“I went to church for nearly 40 years before practicing Falun Dafa,” he said. “However, after learning about the principle of 'no second school,' I stopped attending church.”

When Mr. Chin announced to his family that he would only practice Falun Dafa, his wife strongly objected and threatened to divorce him. He kindly explained the benefits of practicing Dafa, including the fact that it helps raise one's morality. His children, however, told him that he was much kinder and that they were happy to listen to him.

“My boss later dispatched me to the busiest location, with the biggest workload,” Mr. Chin said. “By following Dafa's principles of Truthfulness-Compassion-Forbearance, everything I did went smoothly. Some staff members said that there were always conflicts between different personnel when the former boss was there, but after I took over the position, all the infighting between employees stopped, and nobody knew why.

“One day, my upper-level managers conducted an anonymous survey without my knowledge. I was later selected as the best civil servant and received the top achievement award,” said Mr. Chin. He attributes his success to the practice of Falun Dafa.

Mr. Kim, from Cheongdo County in North Gyeongsang Province, started practicing Falun Gong in July 2013. “When I first read Lunyu, I felt that the words were not from this secular world, but a message from the universe. All of the cells of my body were vibrating.

“The first day that I started reading Zhuan Falun , I read it straight through until 3 a.m., the next morning. I understood the meaning of human existence and had all of my long-standing questions about life answered. I told my wife, 'When you read this book, you need to put aside everything you think you know about the world and simply read it with an open mind, instead of seeking knowledge.'