Standing opposite the Eiffel Tower, a representative from Doctors Against Forced Organ Harvesting told tourists and locals how the Chinese communist regime has harvested organs from thousands of living Falun Gong practitioners, selling them for profit to those needing transplants.

Many people signed a petition to condemn the regime's crimes against humanity.

Many also stopped to watch as practitioners demonstrated Falun Gong exercises, accompanied by the soothing, melodious music playing softly in the background. The practitioners' blue tops and white trousers looked particularly vibrant against an overcast sky. 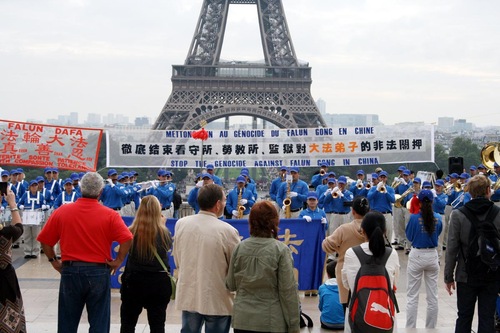 European practitioners gather in front of the Eiffel Tower in Paris. 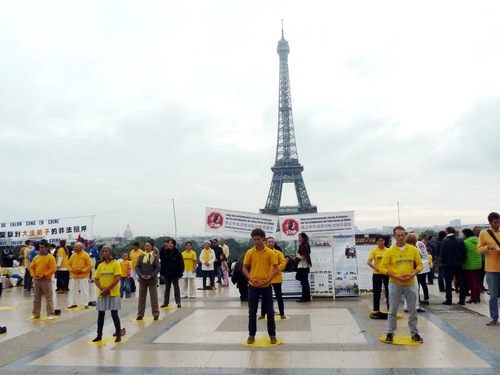 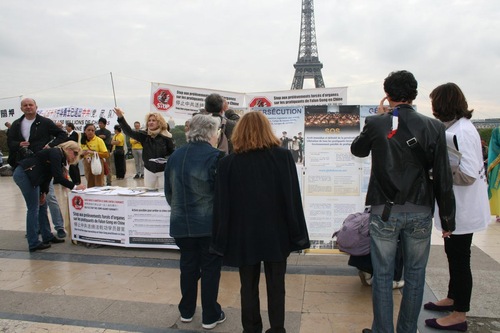 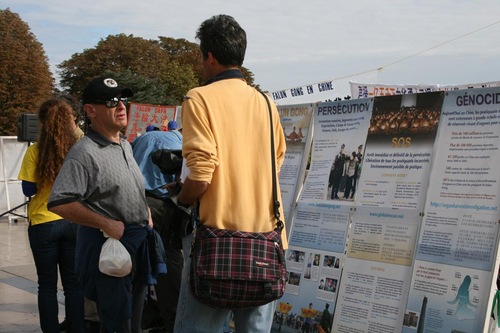 A practitioner speaks to passersby about the persecution of Falun Gong in China. 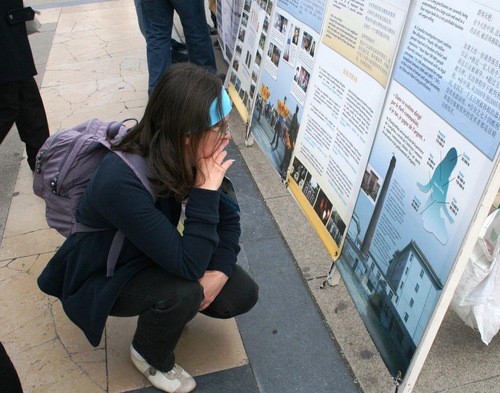 A girl reads about the Chinese regime's 14-year persecution of Falun Gong. 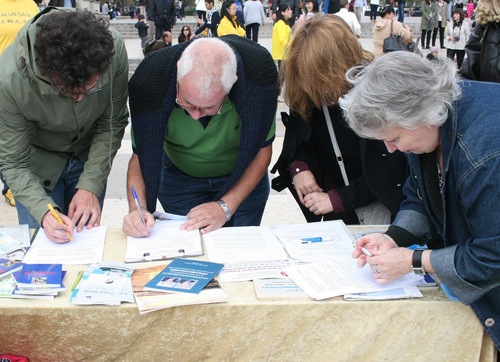 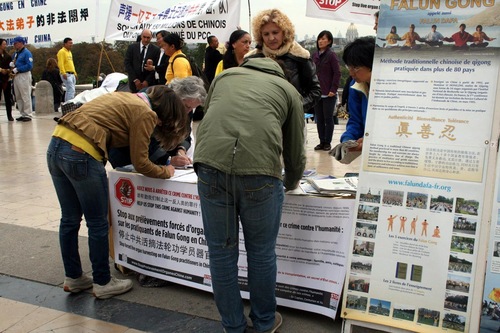 People from All Walks of Life Condemn the Chinese Regime's Brutality

As a former Kuomintang officer, he witnessed the Party's insidious nature firsthand, including its wonton desire to destroy Chinese traditional culture and murder Chinese people. He talked about the regime's love of cruelty and torture, and said that he, too, had been a victim of the Party's persecution.

The elderly man mentioned that he had read the Nine Commentaries on the Chinese Communist Party and although every word in the book is true, he believed that its contents had not gone far enough to expose all of the regime's crimes.

“Many of the CCP’s evil deeds have not been recorded or revealed,” he said. “One day, when I publish my memoirs, I'll expose some of the unknown or less-known CCP atrocities and lies. This will give the Chinese people further insight into the Party's brutal and rotten nature!”

After a Cambodian-Chinese woman read an informational flier, she said, “I support your anti-persecution efforts and hope that I will be alive to see the Party's imminent fall.”

In 1975, Pol Pot's communist regime killed and maimed people with impunity, partially because it enjoyed the full backing of the Chinese Communist Party. The woman said that she was 22 years old when Pol Pot's troops fired on and killed all seven members of her family.

“In Southeast Asia, including Cambodia and Vietnam, people know that as long as the CCP is still in power, they will never be truly free,” she explained.

“The CCP could use its armed forces to control and oppress virtually any state or regime that it chose to,” said the woman. “Only with the CCP’s downfall will these countries be free from intimidation and persecution.”

She believed that the Party was capable of the most heinous of crimes. “Knowing the Party as well as I do,” she said, “I am positive that its alleged crime of organ harvesting from living Falun Gong practitioners is true.” She said she looked forward to an early demise of the Party's rule.

Couple from Canada: The Persecution of Falun Gong “Incredibly Disturbing!”

Since 2006, evidence confirming the Chinese regime's involvement in organ harvesting from living Falun Gong practitioners has been steadily mounting.

Mark and André were visiting Paris from Quebec, Canada. They both looked visibly shocked when they found out about the regime's ongoing persecution of Falun Gong.

“We cannot understand why such a simple practice that benefits people both mentally and physically is persecuted by the Chinese Party,” exclaimed Mark. “It is incredibly disturbing! I am shocked by the CCP’s organ harvesting crimes and I hope that it will end very soon.”

"It is very meaningful for practitioners to speak out against the Party's persecution of Falun Gong, whether they are in China or abroad,” added André.

Before leaving, they both signed the petition calling for the end of organ harvesting atrocities in China.

Bruné Monique, a French woman, kept snapping photos of the Divine Land Marching Band and the practitioners’ exercise demonstrations. She said that she has always regarded Paris as a “Treasure Island.”

When she found out that Falun Gong practitioners in China were being tortured and their organ were being forcibly removed from their bodies while they were still alive, she was aghast.

“These outdoor activities that you hold allow people to truly know what is happening in China, something that no government in the world would dare to do,” she said. “People definitely need to know that Falun Gong practitioners are being severely persecuted!"

The woman added that she would tell her friends about the persecution so that they would be informed, too.

“Chinese People in Europe Have Changed a Lot!”

Falun Gong practitioners' peaceful protests around the world, amidst the brutality of the persecution in China over the past 14 years, have impressed people from all walks of life.

Ms. Pan, a practitioner from Switzerland, described how a family of tourists from China, including two teenage boys and their parents, stared in shock at the Divine Land Marching Band, which is composed entirely of Falun Gong practitioners. Due to the persecution, such a band cannot be seen in China today.

The two teenage boys had broken through the Chinese regime's Internet blockade while back home and were already aware that Falun Gong has spread widely all over the world. They gladly agreed withdraw from the Communist Youth League and Young Pioneers, so as to symbolically separate themselves from the communist regime.

Ms. Pan told the parents how the Party had staged the Tiananmen Square self-immolation in order to defame Falun Gong, and how it is harvesting organs from living Falun Gong practitioners for profit. Realizing the true nature of the regime, the parents agreed to withdraw from the CCP and its affiliated organizations.

Ms. Zhang, another Falun Gong practitioner, said that over 150 million Chinese have quit the Party and its affiliated organizations to date, choosing to side with goodness.

“This shows that people still have goodness in their hearts,” she said.

“The CCP has continually relied on lies to deceive the Chinese people about Falun Gong,” Ms. Zhang explained, “which is why people who do not know the truth many times wind up hating Falun Gong and willingly participate in the persecution.”

“As Falun Gong practitioners continue to clarify the truth, more and more people are refusing to play the role of accomplices in the regime's crimes against humanity,” she added.

“Now, in the 13th District of Paris, a lot of Chinese people went from being angry at the first sight of a practitioner to being very happy to receive the practitioners' informational materials.

“Some Chinese people now take the initiative to ask for informational materials, while others ask practitioners to help them quit the CCP. Chinese people in Europe have changed a lot!”

Ms. Zhang said that many tourists from China who quit the Party asked her to please pay attention to her own safety. Their concern for her safety has touched her heart.

“I hope that more and more people will be able to see through the regime's lies and quit the Party and its affiliated organizations,” said Ms. Zhang. “Making this choice will ensure that they enjoy a bright and prosperous future!”