(Minghui.org) On October 18, 2013, a day before the 2013 US West International Falun Dafa Experience Sharing Conference, Falun Gong practitioners held banners along the busy streets in Monterey Park, a city with a large Chinese population in the Los Angeles metropolitan area, to raise awareness of the persecution and support the over 148 million Chinese who have quit the Chinese Communist Party (CCP) and its affiliated organizations.

Many drivers honked to express their support. Quite a few pedestrians stopped to learn about Falun Gong from the practitioners. 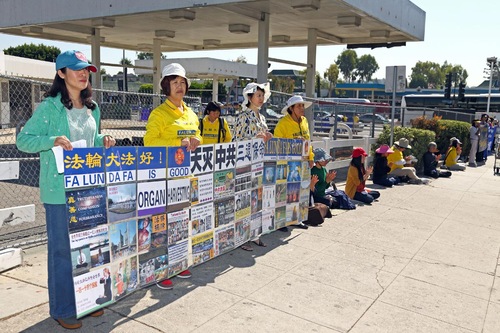 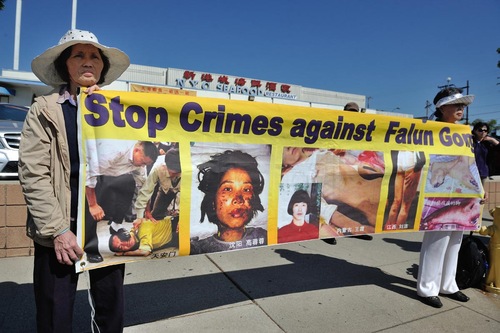 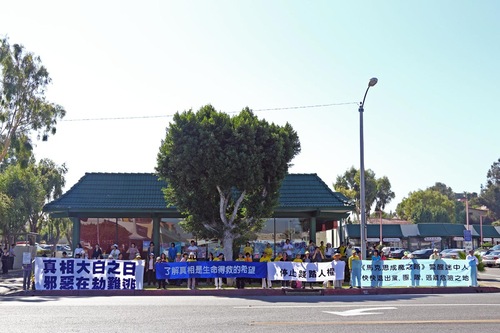 Helen Li, organizer of the event and representative of the Global Service Center for Quitting the CCP in Los Angeles, said that 3,727 Falun Gong practitioners have been documented to have died as a direct result of persecution.

“The bloody facts make us wonder: why does the Chinese Communist Party treat Chinese people this way? The answer lies in its history. Since inception, the CCP has opposed traditional Chinese culture. It has been enslaving and slaughtering Chinese people,” she added.

According to Ms. Li, Falun Gong practitioners don't bow to the brutality of the CCP. They don't respond to evil with evil. They have persisted in their belief and clarified the truth of Falun Gong peacefully and rationally. More and more people are acknowledging their efforts and supporting them.

Ms. Li reminded the Chinese people to quit the CCP and choose a bright and peaceful future.

Baby Died as a Result of Torture

Some Falun Gong practitioner participants at the event have experienced the torture first hand. Ms. Jin was one of them. With tears running down her face, she said: “In 1999, I was detained for over two months because I didn't want to abandon my belief. The detention center knew that I was pregnant. However, I was kept in a very crowded cell that did not have enough space for everyone to lie down.”

During the first half of 2000, the local police station ransacked Ms. Jin's home. Due to the persecution, her baby was born prematurely and eventually passed away. Shortly after, Ms. Jin was arrested again and placed in the Tianjin Women's Labor Camp. She has not been able to conceive since then.

Mr. Zhang just came to the United States from Mainland China. Because he was steadfast in his practice of Falun Gong, he was arrested twice. Once he was detained in the Chaohu Prison in Anhui Province for eight years. During that time, he had to do slave labor and was subjected to brainwashing over and over again.

The CCP Will Collapse due to Its Persecution of Chinese People

Mr. Li taught in a university in China for many years. As a family member of a Falun Gong practitioner, he witnessed Falun Gong's benefit to his wife and the CCP's persecution of his wife and family.

When asked if he supported his wife and daughter's perseverance in their belief, he said: “This is not the main issue. The main issue is that the CCP interferes with things that are none of its business. Whether this is a matter of faith or a matter of better health, it is none of the CCP's business. CCP violates people's human rights and deprives Chinese people of their freedom.”

Mr. Li concluded, “The CCP is an evil party.” As a university professor worked in China for several decades, he knew the history of CCP: “Starting from the era of Mao, the CCP has been teaching people to do bad deeds – fighting with heaven, earth and people, and promoting atheism. Isn't this evil?!”

Mr. Li has been in the US for two years. He found that even though the two political parties in the US had different opinions, they were discussing how to better spend taxpayers' money. But the CCP didn't have such thoughts of being responsible for its citizens.

“What the CCP thinks about is how to plunder more and at the same time 'maintain stability.'” Mr. Li agreed with Falun Gong practitioners that the CCP's collapse would be a self-driven outcome of its persecution of Chinese people.