Practitioners hung up an eye-catching banner that read, "Stop persecuting Falun Gong,” and set up multiple display panels with additional information about the communist regime's brutal persecution of Falun Gong in China.

The senseless suppression has continued since 1999 and affected the lives of millions of peaceful citizens who believe in Truthfulness-Compassion-Forbearance, the main principles of Falun Gong. Hundreds of thousands have been imprisoned, tortured and subjected to slave labor, and many have been killed for their organs in the hospitals and underground facilities run by the regime.

Many passersby in Stockholm stopped by the practitioners' display throughout the day. When practitioners demonstrated the five gentle, meditative exercises of Falun Gong, tourists and locals alike paused to watch and enjoy the serenity of the scene.

Upon learning how peaceful citizens are being cruelly persecuted by the Chinese communist regime, with their organs being removed on a large scale, people gladly signed the petition to support Falun Gong. 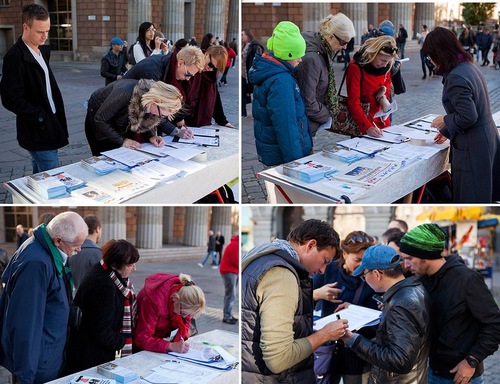 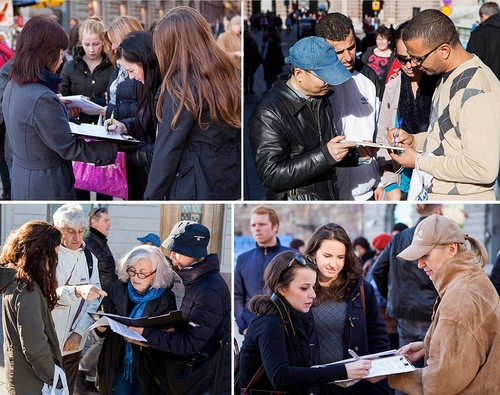 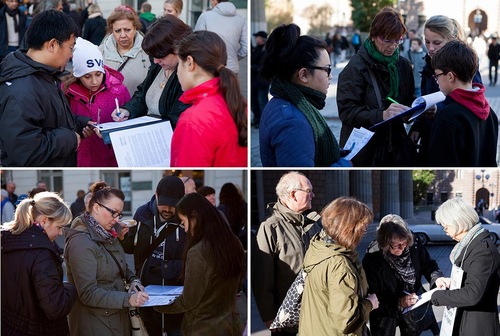 A young man from Hong Kong signed the petition and said to a practitioner: "In Hong Kong, such activities can also be seen, so I am already aware of the persecution of Falun Gong [in mainland China]. I support you!"

Another man said to a practitioner: "You should do this more and let more people know what bad deeds the Chinese regime has done!"

Having learned about the regime's forced organ harvesting from living Falun Gong practitioners, two doctors from Sweden felt very angry that such an atrocity could take place in this day and age. Both took the initiative to sign the petition.

One of them said: "I have never heard of such a thing—that human organs are being removed without using anaesthetics. This is really too cruel!" He said that he would let more people know about this issue.

After signing the petition, a middle-aged woman from Germany spoke to her mother and daughter about the injustice happening in China. The two were shocked and repeatedly shook their heads in disbelief. Both then signed the petition to add their voice of support for Falun Gong.

Many Chinese tourists passed by the practitioners' display as well. A woman told a practitioner that she had learned the facts about Falun Gong and liked watching foreign news, which told the truth, as opposed to the regime's propaganda. She happily agreed to quit the regime-affiliated Youth League, so as to break away from the evil deeds of the Chinese Communist Party.

Two young people from China carefully read the display boards. One of them said: "Now everyone says that the Communist Party is bad, but if you do not know these facts, you dare not believe that such a thing [organ harvesting] could exist."

Both young men quit the regime-affiliated Youth League and signed the petition in support of Falun Gong. They expressed their hope that the persecution would end as soon as possible.