(Minghui.Org) On October 19, 2013, the 2013 US West International Falun Dafa Experience Sharing Conference was held at the Long Beach Convention Center in the Los Angeles metropolitan area in California.

Over 5,000 Falun Dafa practitioners attended the conference. Mr. Li Hongzhi, the founder of Falun Dafa (also called Falun Gong), came to teach the Fa for about half an hour and encouraged Dafa disciples to seize the time to save sentient beings. 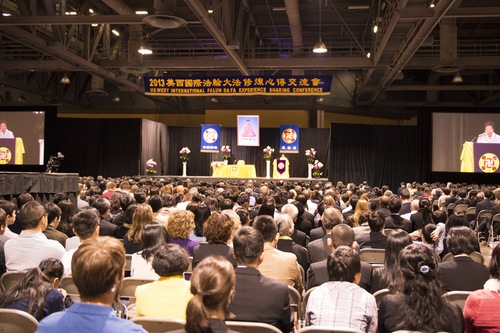 The 2013 US West International Falun Dafa Experience Sharing Conference was held in the Long Beach Convention Center in the Los Angeles metropolitan area. 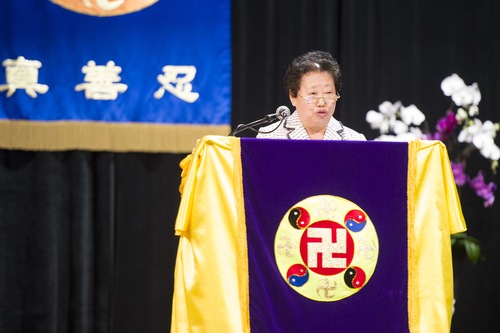 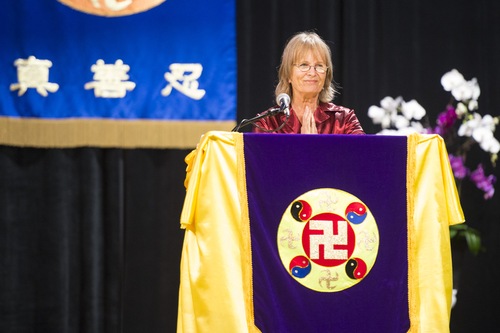 Fourteen Chinese and Western Falun Gong practitioners presented experience-sharing papers on how they looked within to elevate their xinxing and clarified the truth about Falun Gong and the persecution by the communist regime.

Sense of Urgency in Saving People

Ms. Liu is almost 70 years old. She is introverted and shy. However, in order to help her fellow Chinese see the evil nature of the Chinese Communist Party (CCP), she overcame many difficulties including language barriers to clarify the facts and help Chinese tourists quit the CCP and its affiliated organizations at airports and tourist attractions in Jeju island in South Korea.

Her record was helping 420 Chinese renounce the Party in a single day. These Chinese tourists included many CCP officials and 610 Office agents who directly participated in the persecution of Falun Gong.

One of them tried to threaten Ms. Liu: “I'm in charge of arresting Falun Gong. We will extradite you back.” With dignity, Ms. Liu explained to him what Falun Gong was, why the CCP persecuted Falun Gong, and why Falun Gong practitioners helped Chinese quit the CCP. In the end, this person quit the CCP and kept thanking Ms. Liu.

Ms. Liu didn't think she had done enough: “There are thousands of Chinese tourists every day at the Jeju island. I can only help two to three hundred of them to quit the CCP. I am sad and anxious because so many Chinese every day cannot hear the truth from me. I don't know if they will have other opportunities for salvation. I have only one thought in my mind: try my best to save more sentient beings.”

Gisela Sommer is a German American. When she noticed that a lot of Chinese tourists dined at a Chinese restaurant, she realized this was a good opportunity to reach Chinese people with the truth about Falun Gong.

In the past 16 months, she and another two Western practitioners have been distributing Falun Gong informational materials outside of the restaurant and helping Chinese tourists quit the CCP.

Some Chinese tourists were intrigued to encounter Westerners who practiced Falun Gong. Some asked her to go visit China and said that China was different now. She responded with a question: “I practice Falun Gong. If I go to China and do the exercises in the park, what will happen to me?” The tourists were silent.

During the World Kidney Conference last year, several busloads of Chinese doctors went to the restaurant. Many took the organ harvesting special editions Ms. Sommer offered. Some shook her hands before saying goodbye.

Since 2002, Ms. Yang from Seattle, Washington has been informing Chinese of facts of the persecution through phone calls. She has persisted in this effort for 11 years.

She is now 76 years old. Every day, she sends faxes during the day and makes phone calls for over four hours at night to help fellow Chinese see the evil nature of the CCP and obtain freedom by renouncing it.

Volunteers such as Ms. Liu, Ms. Yang and Ms. Sommer are all over the world. Through their efforts, they have helped over 150 million Chinese quit the CCP on the website of the Epoch Times and choose a good future.

Cultivation in Every Aspect of Life

Ms. Wu from Osaka, Japan shared her experiences in exposing the CCP's forced live organ harvesting to the mainstream society in her country. When so many things happened all at once, she felt tremendous pressure and thought of giving up.

With encouragement of fellow practitioners, Ms. Wu enlightened that the pressure was there for her to expand her capacity. When she let go of her notions and attachment of comfort, she felt the power of diligence. The key was to let go of self as much as possible and try one's best.

When she saw her father's remarkable recovery from chronic diseases after practicing Falun Gong and that her illiterate mother had learned to read all of Master's books, Ms. Song from Los Angeles began practicing Falun Gong in 2009. Shortly after, she joined a practitioner-run media company.

The work was a process of solid cultivation. She got rid of her attachments to not being able to handle criticism and feeling wronged. She dug out her hidden jealousy and pursuit of fame. She gradually let go of selfishness to harmonize the group and made efforts to expand her capacity.

On her journey of cultivation, she stumbled and overcame one tribulation after another. There were pains, grievances, and more importantly, the joy of improvement.

Mayra Jaime from Mexico shared how she dealt with different difficulties when hosting Shen Yun in her city. She learned how to stay calm when encountering hardships and think for others when making decisions. She also shared how several times difficult tasks were achieved with ease and she felt that Master was arranging everything.

Audience: Learn from Each Other and Elevate as a Group

Tilly, Jane and Recheli from London were all very touched by Master's lecture and fellow practitioners' sharing. They realized the importance and urgency of clarifying the facts to Chinese. 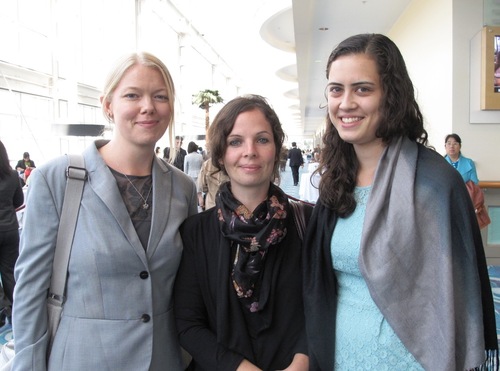 One major takeaway for Tilly, Jane and Recheli from London was the importance and urgency of clarifying the facts to Chinese.

What struck Tilly most was that Master emphasized again that Chinese people had great origins. They came to the human world with a strong faith and confidence in Dafa and have been waiting for the truth.

She said that after going back she plans to go to tourist sites to save Chinese tourists. She also learned from Ms. Sommer that she didn't have to be a Chinese to do that. She could simply memorize a few Chinese sentences to help Chinese tourists to know the facts of Falun Gong and give them materials. By the same token, Chinese practitioners have been able to collect over 140 signatures each day with simple English of “hello” and “please sign your name” in London's Chinatown.

Jane found her confidence grew in terms of clarifying the facts to Chinese and helping them quit the CCP. She realized that everyone could do that once he or she had the will. She said she would carry Chinese and English flyers with her so she could clarify the truth to any Chinese she came across.

Ms. Zhao left China over a year ago. It was her first time ever listening to Master's lecture in person. She was very excited. She obtained the Fa in 1998 and was restored to health after being sick for over 24 years.

After the persecution started, she was arrested and tortured. She was rescued overseas two years ago. She is now clarifying the facts in Chinatown in her city.

She said that she would do better and be more diligent in the future: “Even though I have been busy, I see my shortcomings from today's sharing. My record was helping 24 people quit the CCP in an afternoon. However, the fellow practitioner in South Korea was able to help over 400 in a day. She really put her heart into it! I see a huge gap here.”