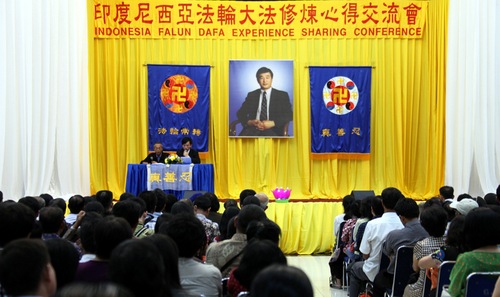 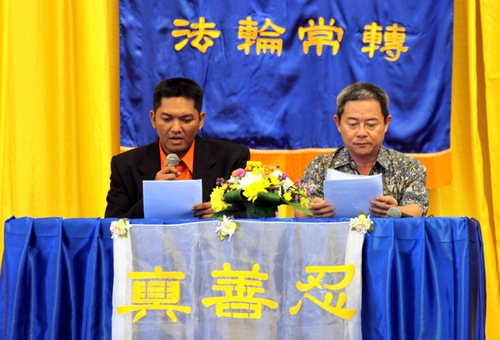 A practitioner from Bali shared how he had spread Falun Gong in his village. After setting up a group-Fa study, the cultivation state and environment among the local practitioners changed for the better, with more and more villagers joining the practice.

A practitioner from Jakarta shared how he had started practicing Falun Gong in 2005, but had not been very diligent until he ran into a rash of tribulations in 2011. He finally woke up and realized that he could not continue to allow himself to miss this opportunity of the ages.

Over the past two years, he frequently went to the local Chinese embassy to protest the Chinese Communist Party's persecution of Falun Gong and to clarify the truth. As a result, he felt that both his mind and body had been purified and that the people around him, including the local police, had changed their attitudes towards him.

A practitioner from Bali shared that her local government had forbidden practitioners from holding banners and clarifying the facts to Chinese tourists in a popular scenic site. As a result, she and many practitioners around her had become complacent about the situation.

One night, she had a dream in which many people were being washed away or drowned by a flood. People were screaming and asked her to help them. She attempted to save as many people as she could but in the end, she only managed to save just a few.

When she woke up, she realized that she was not doing the three things well, and thus it was hard to save people. From then on, she studied the Fa more diligently and began proactively distributing copies of the Nine Commentaries on the Chinese Communist Party.

Although some security personnel still attempt to stop her from distributing informational materials, due to her righteous thoughts, the interference has become less severe.