They also set up huge banners that read, “Falun Dafa is good,” “The world needs Truthfulness-Compassion-Forbearance,” and “Please help stop the persecution of Falun Gong in China” in both English and Chinese.

Within five hours, over 1,000 people from around the world signed the petition to help stop the Chinese Communist Party’s (CCP) practice of organ harvesting from living Falun Gong practitioners. 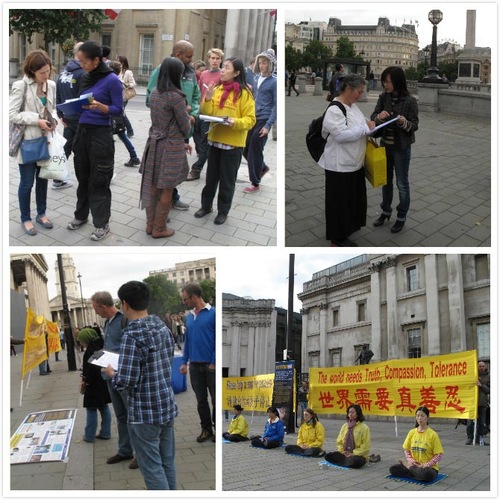 UK practitioners demonstrate the exercises and clarify the facts in Trafalgar Square. 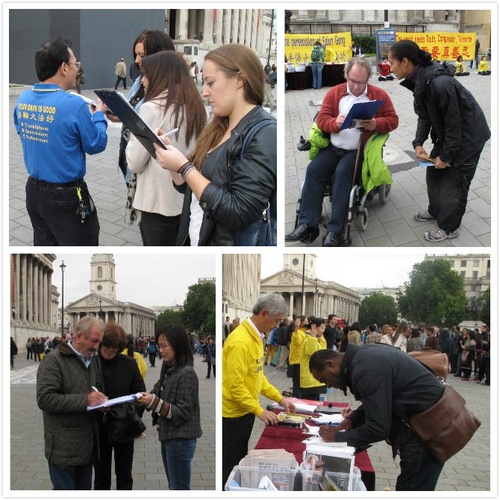 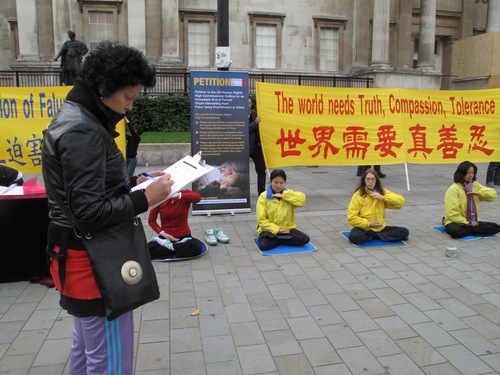 Many tourists were attracted to the practitioner's peaceful Falun Gong exercise movements and music. After they were told that these simple exercises were banned in China and that the CCP harvests organs from living Falun Gong practitioners for profit, they immediately signed the petition form.

“I Am a Doctor and I, Too, Am Against Forced Organ Harvesting!” 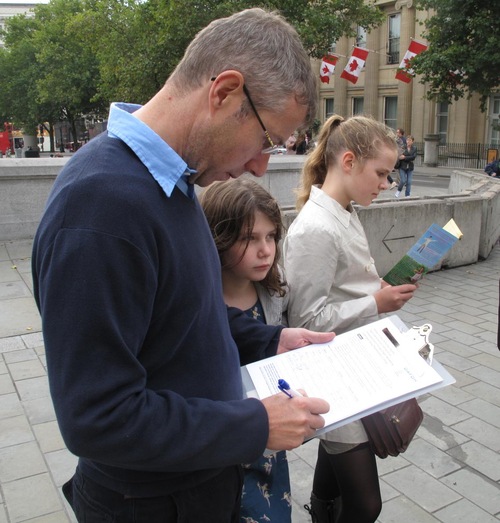 A British doctor signs the petition.

A father and his two children stopped to read a practitioner’s flier. “I am a doctor and I, too, am against forced organ harvesting. Of course I will sign!” After seeing how interested their dad was in the flier, the girls started to carefully read it, too. 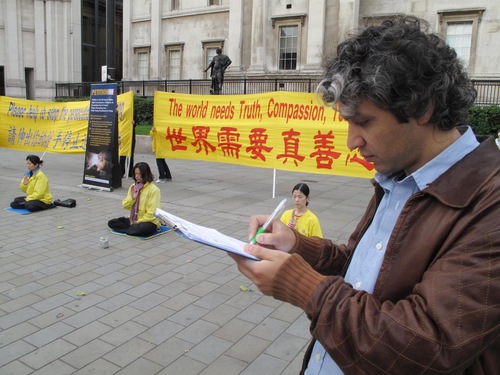 A young man watched the practitioners doing the sitting meditation, then stared at the yellow banner next to him, proclaiming that Falun Gong is being brutally persecuted in China.

“People are persecuted for doing these peaceful exercises?” he asked incredulously. “I’ll sign!” He then told the practitioner that he was from Turkey and knew about the oppressive Chinese regime. 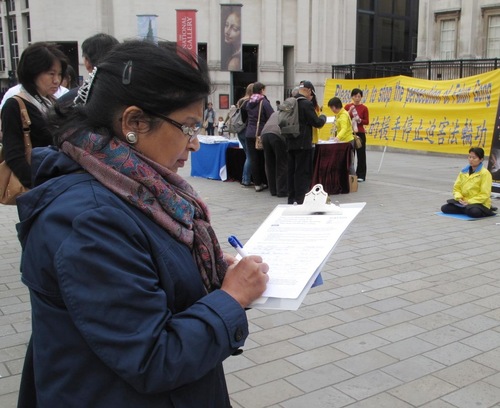 After Satina, a UK woman of Indian ethnicity, watched the practitioners demonstrate the Dafa exercises, she signed the petition. “I meditate, too, so I know the benefits of meditation,” she told a practitioner.

She said that she was well aware of the Chinese Party's assault on religious freedom in China, as well as its mistreatment of Tibetans.

When Satina expressed concern over the seemingly enormous economic might of the Chinese regime, a practitioner reminded her to believe instead in the power of conscience. “Yes, the real power comes from one’s heart, one’s conscience!” she replied.

“No One Can Shake Your Inner Peace”

Deborah Lee and her husband were visiting the United Kingdom from Missouri, USA. They signed the DAFOH petition, then expressed an interest in learning Falun Gong.

“We like the peaceful and rational approach that you're taking in your activities to stop the persecution,” they said. “No one can shake your inner peace,” said Deborah after seeing the practitioners doing the gentle Dafa exercises.

Stephanie, who was visiting Trafalgar Square from Italy, was also deeply moved by the peaceful energy given off by the practitioners. After she signed the petition, she faced the practitioners and pressed her hands together in front of her, slightly bowing her head.

“We Know How Awful the CCP Really Is” 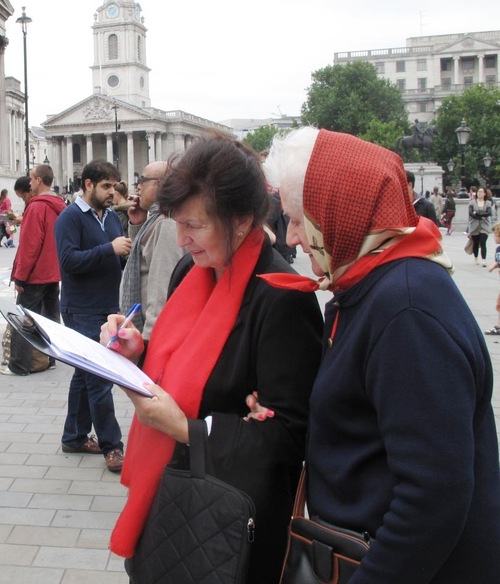 Two elderly women were watching the practitioners doing the exercises and commenting about it. A practitioner talked with them and discovered that they had immigrated to London from Poland and that they used to live under communist rule, too.

When the practitioner told them about the CCP’s forced organ harvesting from Falun Gong practitioners, they said that the Communist Party was capable of the worst atrocities. They too, signed the petition.

“We Should Let Everyone Know, to Let Their Hearts Hear” 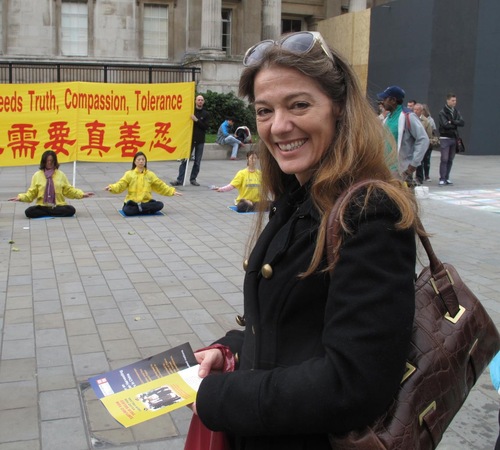 Ms. Liroko from NY hopes that the CCP’s crimes against humanity are exposed to the whole world.

Ms. Liroko, who is from Brooklyn, New York, works in the broadcasting industry. She said that she was glad to see the practitioners’ signature campaign drawing attention to the Chinese regime's live organ harvesting crimes and the overwhelming positive response from the public.

“This live organ harvesting is a crime that affects all lives everywhere; it’s the desecration of all creation,” she said. “It is very important to let everyone know about it; to let their hearts hear the truth.

“Some people think that whatever goes on in China is none of their business, but, actually, what goes on there is related to everyone, everywhere, because we are all interrelated!”

“Clarifying the Truth as a Caregiver”

“Teacher Ms. Jiang Xinbo Taken to Brainwashing Center after Being Persecuted in Prison for Four Years ”