(Minghui.org) On September 20-22, 2013, the Thirty-Eighth Autumn Health Expo was held at the Katowice Cultural Center in Katowice, Poland. Over 200 companies and organizations participated in the event to showcase their health-related products. The Polish Falun Dafa Association also took part in the expo and has been doing so since 2010.

The practitioners also demonstrated the Dafa exercises and handed out hundreds of copies of the Falun Gong Health Investigation Report . Several people seemed very keen on learning the practice and bought copies of Zhuan Falun, the main book of Falun Gong. 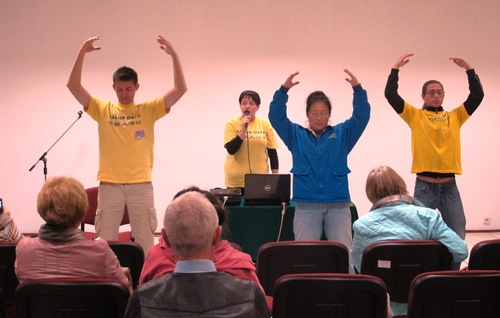 Practitioners demonstrate the exercises in front of expo attendees 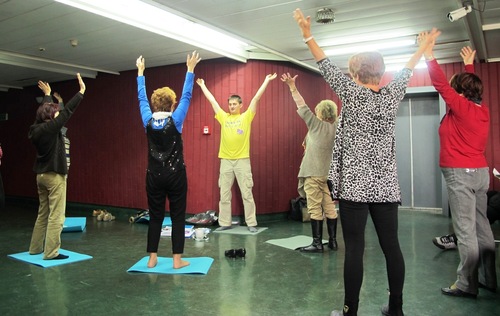 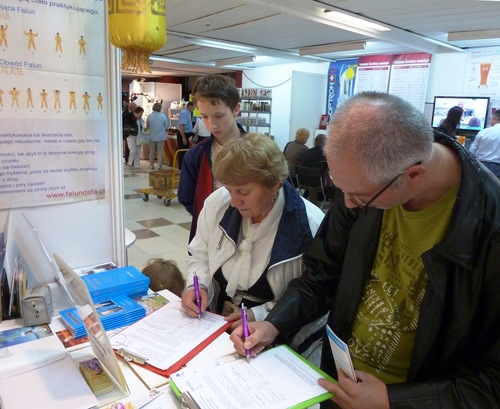 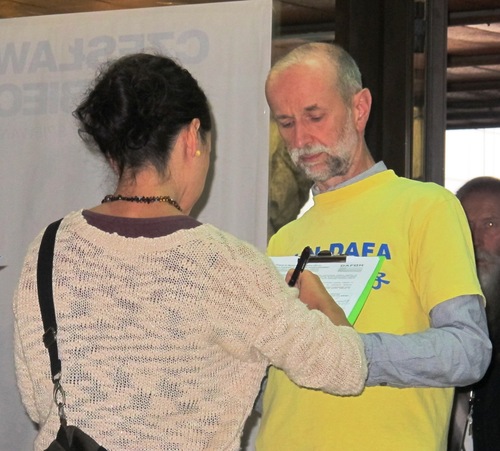 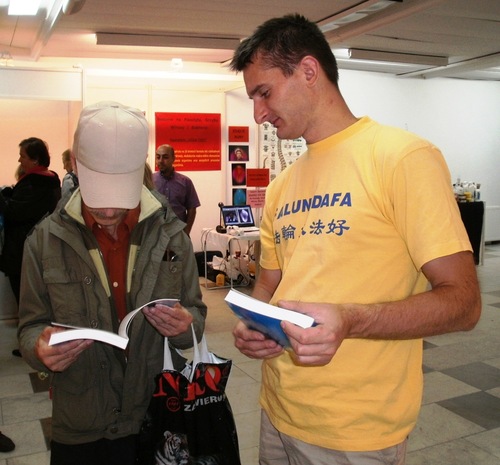 Event exhibitor: “Why are people who strive to be good being tortured?”

An event exhibitor stopped by the Falun Dafa booth and read some of the available informational materials. She was shocked to find out about the Chinese regime's organ harvesting crimes and immediately signed the petition.

Before she left, she asked for a blank petition form, saying that she would ask some of her friends to sign it, too. Shortly after, she handed back the petition form, completely filled in.

"The fact that the Party wantonly engages in the practice of live organ harvesting has completely destroyed any remaining good impressions that I had of China,” she said. “Why are people who strive to be good being tortured? Would that not leave the country full of bad people? The world is in danger; this atrocity must be stopped. You are doing the right thing. God bless you!"

“My 'misfortune' turned out to be a blessing in disguise!”

A woman walked up to the practitioner’s booth and said that she had come to the expo especially to sign the petition form. She had started to practice Falun Gong several months after she had undergone surgery for her cancer.

After a few weeks of doing the Dafa exercises and reading Zhuan Falun , on and off, she found that her health and mental state had greatly improved. She said that she “felt relaxed and recovered quickly from her surgery.” Since then, she began to practice Falun Gong every day.

“After I became ill, I kept blaming this or that thing for causing my illness. It was not until I read Zhuan Falun that I learned that the underlying cause of my cancer was karma. My 'misfortune' turned out to be a blessing in disguise! It is hard to believe that such a good practice is persecuted by the Communist Party.

“The CCP even harvests organs from living Falun Gong practitioners. As soon as I think of these things I feel a lot of sadness and indignation." Before she left, she tearfully hugged each practitioner and sincerely thanked the practitioners who had initially taught her the Dafa exercises.

Elderly man: “My celestial eye is open. I see a lot of people dying in the future, a whole lot!”

Tadeusz Piedo, 75, said that he came to the expo to watch the Falun Gong exercise demonstration. At the end of the first set of exercises, a practitioner asked him: "Sir, did you want to learn Falun Gong?" He said:" Yes, I do, but before I start, I want to ask you a question.

“My celestial eye is open and I see a scene in which a lot of people are dying in the future, a whole lot! I always wanted to know what that was all about. Whenever I feel like talking to someone about this, I always feel a big hand clutching my mouth, preventing me from saying even a word.

“Only Falun Gong can give me the right answer”

“While I was watching your people perform the exercises, I suddenly remembered the scene that I saw in my celestial eye and wanted to ask you. To my surprise, I noticed that the big hand was gone, which means that I am allowed to ask Falun Gong practitioners about this. It must be that only Falun Gong can give me the right answer. So please tell me."

"I would highly recommend that you read the book, Zhuan Falun ,” replied the practitioner. “You will find detailed answers to your most pressing questions. After walking on the path of cultivation, every practitioner knows that gods created humans beings along with a standard for being a human being. If humans cannot comply with this standard, gods will annihilate them.

“The CCP persecutes Falun Gong practitioners and harvests their organs because they will not give up their belief in Truthfulness-Compassion-Forbearance. How many people, countries, and governments are able to discern good from evil? And even if they can, how many remain apathetic, or turn a blind eye due to their vested self-interests?

“Will God continue to look upon this injustice without intervening? Won’t all of these people be punished? We came here today to promote Falun Dafa precisely to help people avoid these consequences. Falun Dafa can help people improve their characters and become better people, quickly elevating their morality.

“Our Master tells us that disasters will not affect good people. If you would like a detailed explanation of all of this, please read Zhuan Falun ."

Falun Gong “is the gospel of humanity”

Mr. Piedo firmly held the practitioner’s hand and said: "Falun Dafa can solve such a big problem. It is critical. This is the gospel of humanity. I must read this book, Zhuan Falun ! Today, I feel extremely lucky. The CCP persecutes such a good practice. It will certainly come to a disastrous end!"

Mr. Piedo bought a copy of Zhuan Falun then signed the petition form. He also left his phone number and cordially invited the practitioners to visit his home.