(Minghui.org) On the morning of December 23 2012, Falun Dafa practitioners of Jakarta, Indonesia, gathered in front of the monument in Central Park for a large-scale group exercise activity. They demonstrated the graceful movements of the Falun Dafa exercises and displayed the beauty of Truthfulness-Compassion-Forbearance. 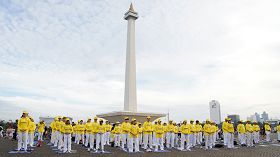 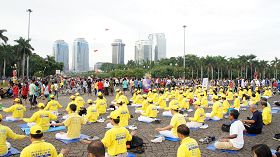 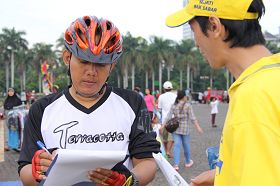 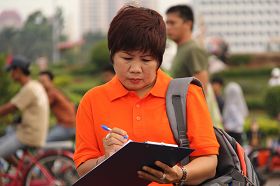 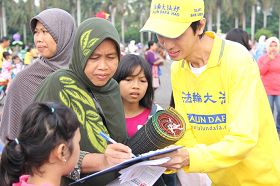 It was a Sunday and a public holiday, so there were many people enjoying themselves in the park. The practitioners talked to passersby about Falun Gong, the principles of the spiritual movement, and the persecution of Falun Gong in China.

During the two-hour activity, many learned the truth about Falun Gong and some took photos and video of the exercises. Many people signed he petition to support Falun Dafa practitioners' efforts to end the persecution in China.

After the activity ended, the participants took a group photo to wish Master Li Hongzhi a Happy New Year.