(Minghui.org) On January 18, a public forum focusing on organ harvesting in China was held at the city library in Calgary, Canada. Almost 200 people, many from the fields of medicine, law, media and government, attended. The event was organized by the Falun Dafa Association of Calgary. The forum had two sections. In the first, experts gave speeches on organ harvesting in China, and the in the second, the audience watched the film, Free China, the story of two Falun Gong practitioners who were persecuted in China. 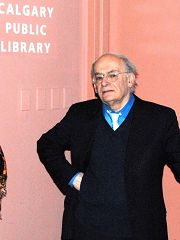 David Matas, a senior legal counsel of B'nai Brith Canada, and Wu Xiao'en, a medical doctor, introduced the investigation into organ harvesting and organ transplants in China. The evidence leads to the conclusion that the Chinese government has been harvesting organs from Falun Gong practitioners for profit. They called upon the international community to pay more attention and help stop these atrocities. 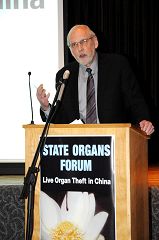 Alastair Lucas, the interim president of the Sheldon Chumir Foundation and a law professor at the University of Calgary, was the host of the forum.

The host of the forum, Alastair Lucas, the interim president of the Sheldon Chumir Foundation and a law professor at University of Calgary, called upon the attendees to spread the information and raise awareness of these human rights violations in China.

David Swann, a medical doctor and a member of the Legislative Assembly of Alberta, said in his speech that people should not treat organ harvesting as some international affair that has nothing to do with themselves. He called upon the public to take action and pass on the information to their congressmen and other government officials. “It is your responsibility as Canadian citizens,” he said.

Attendees were shocked by the brutality. Some said that they had heard about the persecution of Falun Gong, but they didn't know that it was so severe.

One government official who is in charge of organ transplant related affairs in Alberta said that the public needs to be educated. They need to know where the organs come from, and how to obtain legal organs for transplant.

An international commercial lawyer expressed that he had heard about the organ harvesting in China before, but this was the first time that he was able to learn the details about it. He suggested that the Canadian government should stop all drug testing in China that is related to organ transplants.

A reporter from a local media said that he has been to a lot of forums, but this one was the most impressive. He noticed that many attendees cried during the film and speeches. After the forum, many attendees wanted to learn more about Falun Gong. One lady held the hands of an organizer with tears in her eyes, and said that she wanted to do something to help. A filmmaker expressed that he would like to make a movie based on Falun Gong practitioners' stories to help them. Some people asked practitioners to screen Free China in their communities.