(Minghui.org) The Melbourne Quit the Chinese Communist Party Service Center hosted a rally at City Square in Melbourne's Central Business District on the afternoon of January 12, 2013. The rally celebrated the 130 million Chinese people who have publicly announced their withdrawal from the Chinese Communist Party (CCP) and its affiliated organizations, the Communist Youth League and Young Pioneers. Falun Dafa practitioners from Melbourne, as well as the Divine Land Marching Band and a Waist Drum troupe performed at the event. 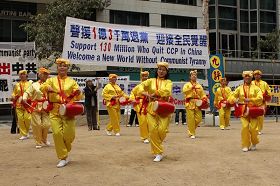 A waist drum troupe performs at the rally celebrating the 130 million Chinese people who have publicly announced their withdrawal from the Chinese Communist Party and its affiliated organizations. 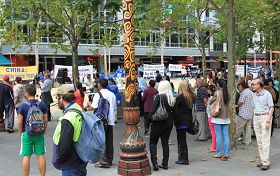 Passersby take in the rally. 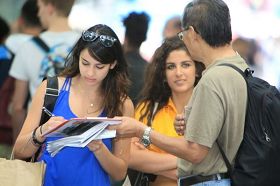 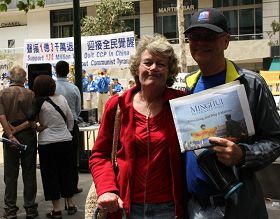 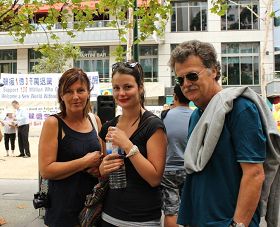 This family from Germany expressed concern about the persecution of Falun Gong in China.

In a speech at the rally, spokesperson Lucy from the Quit the Chinese Communist Party Service Center talked about the origin, development and present status of the “Withdrawals from the CCP.” She discussed the importance of the book Nine Commentaries on the Communist Party, which encourages the public to recognize the true nature of the Communist Party and about the importance of withdrawing from the party. Ms. Fan, a Falun Dafa practitioner who recently escaped the persecution in China, spoke of her own experiences of being persecuted in China.

Many passersby stopped and listened to the speeches and took photos. When they heard about the CCP's forced organ harvesting from living Falun Dafa practitioners in detention, they were shocked and expressed strong condemnation of the CCP. A lot of people eagerly signed a petition calling for the persecution to be stopped immediately.

Melbourne residents Steve and Barbara heard the Divine Land Marching Band's performance and came to the rally from a few blocks away. They had been aware of the persecution of Falun Gong in China and had signed a petition against it before. “I am very sympathetic to the Chinese Falun Gong practitioners under persecution. I believe all of this will end soon,” Steve said. “One day, the Chinese people will have the same freedom as Australians, to do what they want to do, to speak what they want to speak.” Barbara added, “I am a patient who needs a transplant. I need a lung transplant. But I absolutely can't accept the live organ harvesting and won't accept an organ that will conversely deprive another person's life. It is far beyond the bottom line of human ethics.”

Dona from Melbourne said, “I just walked by this area and learned about what is happening in China. Sadly, there are still lots more people who don't know about this. This activity is important. It can help to stop the scary persecution. No one in the world should be tortured. Everyone has the right to belief. This [persecution in China] must be stopped immediately. People have the right to choose. Live organ harvesting is so terrible. It is a crime. We must stop it immediately!”

“The situation in China is bad. I saw the police crack down on protesting civilians. People have no channels to express their will and thought,” said Mr. David Brewer from New Zealand. “I have asked some of my Chinese friends for their comments. They are so scared to speak their true thoughts. And the situation has not changed. Chinese people have been giving the government time and chances to correct itself, appealing to the government. The government must correct its wrongdoings. I have seen Falun Gong protesting at the Chinese Consulate in New Zealand. I don't know too much about Falun Gong but I believe what they say is all true. In China, all news is censored and people don't know the truth. When China was cracking down on the Tibetans' protests, our satellite signal instantly shut down. We lost connection to the outside world completely. Days later, when we could download from the Internet again, we learned what had happened. This has repeated many times. The Chinese government just doesn't want foreigners to know what they have done.”

The Angelika family, visiting from Germany, stopped at the rally. The mother said, “I heard about the persecution of Falun Gong, in Germany. I have read news about it back there. I read another story about it yesterday. It caught my attention. It is so frightening. I can't imagine that people are persecuted like this, where their organs are taken because they persist in their belief. It is unimaginable.” The daughter Isabell added, “It is very evil! A lot of people in western society still don't know about it. So this activity is very important, to let more people learn about what is going on in China. I want to know more about it and hope I can find some ways to help them.”

Geortia from Melbourne commented, “This kind of event is important since there are a lot of people who still don't know about [the persecution in China]. Because we can't see it on TV, nor read about it in newspapers. Without an event like this, a lot of other people like me wouldn't be aware of the truth. I have learned [something about it] and I will continue my reading when I get home. Then I will talk to my friends and let all of them know of what is happening in China.”

Ms. Mao is a student from Beijing who had learned about the persecution of Falun Gong. She said to a reporter that her mother has a rational understanding of the Communist Party so she resisted the pressure and never agreed to join the Communist Party. Based on the same understanding, her parents sent her to Australia to study, away from the dangerous food, water, air and propaganda in China. Ms. Mao said she didn't believe the Communist Party's propaganda about Falun Gong because the CCP is so extremist and one-sided. But she dared not voice her true thoughts in China and even in the years after she came to Australia, “because there are a lot of spies working for China here.”

“I dislike the Chinese Communist Party's autocratic and despotic rule, and its disrespect toward human rights. They destroy civilians' lives at will, and treat its people like trash,” said Mao. “This is the reason why I like living in Australia, where I can enjoy human rights and freedom of speech. When I came to Australia in 2003, I was afraid to approach an event like this. I walked around and stayed far away. Now I am an Australian permanent resident; I want to enjoy my new life and live as the true me.”

The director of the Falun Dafa Association of Melbourne, Mr. Fan, and leader of the Quit the Chinese Communist Party Service Center, Mr. Simon, also spoke at the rally.

“Subconscious Notions May Interfere with Practicing the Exercises ”