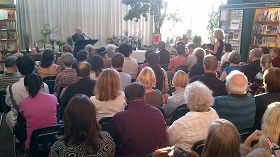 Aviva Goldberg, an organ transplant surgeon in Winnipeg, hosted the book signing. Dr. Goldberg said that as a kidney transplant doctor, she was shocked when she learned about the organ harvesting from living Falun Gong practitioners in China.

Since 2006, David Matas and David Kilgour, a former Canadian diplomat, have been investigating the organ harvesting from living Falun Gong practitioners in China. In 2009, they published the book Bloody Harvest, in which they listed the evidence for organ harvesting in China.

In July 2012, David Matas and Dr. Torsten Trey, a founding member and Executive Director of Doctors Against Forced Organ Harvesting, co-edited and published the new book State Organs. According to the book description by McNally Robinson, “China’s organ transplant numbers are second only to the United States. Unlike any other country, virtually all Chinese organs for transplants come from prisoners. Many of these are prisoners of conscience. The killing of prisoners for their organs is a plain breach of the most basic medical ethics. State Organs explores the involvement of Chinese state institutions in this abuse. The book brings together authors from four continents who share their views and insights on the ways to combat these violations. State Organs aims to inform the reader and hopes to influence change in China to end the abuse.”

At the book signing, Mr. Matas said that the purpose of publishing this book is to help improve the human rights situation in China. He hopes that the international community will take action soon. He mentioned that in Israel, overseas organ transplant surgery has not been covered by medical insurance since April 2012.

A Canadian woman asked why the Chinese people would allow such a thing to happen, which is so hard to imagine in Canada. Mr. Matas said that since 1999, the Chinese government has promoted false propaganda against Falun Gong and has been trying to incite hatred of Falun Gong practitioners. One of the consequences is that the police and doctors, who are involved in organ harvesting and transplants, do not treat Falun Gong practitioners as human beings. One Falun Gong practitioner told him that while he was jailed, a policeman said to him: “I don't think you are human, so I can do whatever I want to you.” Mr. Matas also pointed out that most people in China don't know about the organ harvesting, so the blockade of information keeps the tragedy going in China.