(Minghui.org) On September 1, 2012, the annual Flower Festival Parade was held in Eelde, a small city in the Northern Netherlands. There were a total of 15 floats in the festival parade this year, all of them beautifully decorated. The Falun Gong procession, comprised mostly of Chinese practitioners, caught the attention of spectators. 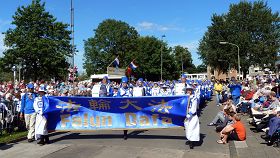 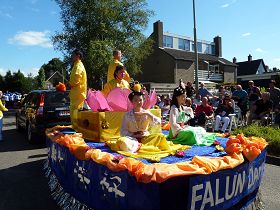 Hearing stirring music being played from a distance, many parade spectators switched on their camcorders, positioned their cameras, and waited for this unique procession. Emerging with firm strides, two Falun Gong practitioners carried a large blue banner in the breeze emblazoned with “Falun Dafa,” and four big Chinese golden characters shimmering in the sun. Amidst the applause of the crowd, some people began chanting, “Falun Dafa.” Many talked to their family and friends about the Falun Gong procession, and some even started learning the tunes by singing along with the music. Upon seeing the members of the band wearing Tang Dynasty costumes, some spectators pressed their hands in front of their chests and others bowed.

Mrs. Marja admired the performance, “Brilliant! I cheered. In such a beautiful parade and in such a sunny day, a fairy-tale story is revealed.” She repeatedly stressed her appreciation for the practitioners.

Mrs. Ponder said about the Divine Land Marching Band, “[It] has left a very good impression upon me. It is a pure and beautiful big band. The music is elegant and peaceful.”

The vast majority of audience received Falun Gong leaflets, and many started reading them intently. Many people expressed their wish to learn the Falun Gong exercises.

Participating in the Divine Land Marching Band were over 100 Falun Gong practitioners from all over Europe. The band members were delighted to see the spectators smiling upon hearing their music. A practitioner from the Netherlands said that along the length of the parade route, many spectators asked what Falun Dafa is. Some of them expressed a desire to learn on the spot and many asked for local contact information in order to learn later.

A practitioner from France said, “When several musicians from France gathered to do the exercises, many passers-by quietly watched and waited until there was a break in the exercise music to ask questions. Two people asked a Falun Gong practitioner to teach them the exercises. This year I feel that many people are actively seeking information about Dafa. Many people appeared to be very open and accepting of Falun Dafa. Once they understood [what Falun Dafa is], they showed a willingness to learn more.”