(Minghui.org) A annual multicultural festival in the Danish capital of Copenhagen attracted over 5 million people on September 1-2, 2012. Danish practitioners participated in the event to introduce Falun Gong to the public.

The Multicultural Festival is a large civic event in Denmark that aims to enhance Copenhagen's image of inclusiveness of different races and ethnics. Volunteers, performers and artists from 85 Danish organizations participated in the event, representing cultural backgrounds from all over the world. The festival included folk dances, performances, concerts, soccer and other games. In order to showcase the city as a Nordic cuisine center, 25 temporary restaurant stands were also set up along the street, presenting cuisine from around the world.

The festival kicked off in a relaxed, cheerful and casual parade on the morning of September 1. Different bands and colorful balloons led the procession. Falun Gong practitioners' procession was also near the front. Practitioners carried banners with words "Falun Dafa is good!" and "Truth-Compassion-Forbearance” in Danish. They also handed out information flyers to the spectators. 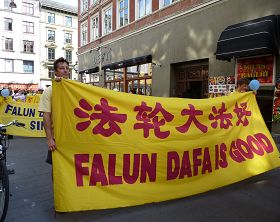 Falun Dafa practitioners in Copenhagen participate in the parade of the annual multicultural festival.

After the parade, practitioners set up a booth to demonstrate Falun Gong exercises and introduce the practice to the public. Though the surroundings were very noisy, the Falun Gong booth emanated a sense of peacefulness and calmness, which attracted many passersby. Practitioners explained that Falun Gong originated in China and is now practiced in over 100 countries worldwide, and that despite its numerous health and mental benefits, it is currently being persecuted by the communist regime in China.

People carefully viewed the shocking pictures depicting the persecution. A gentleman from Albania, which was formerly a communist state, said that he understood how wicked the communist rulers can be, as people in Albania also suffered greatly under the communist rule.

After reading the informational flyer, an English teacher of the African decent did not hesitate to sign a petition to call for the end of the persecution. She said: "How can such a peaceful practice be brutally persecuted by the Chinese Communist Party? It is really incredible!" She added that she would relay the information to her students.

Many people spoke with practitioners and and signed the petition to support Falun Gong. 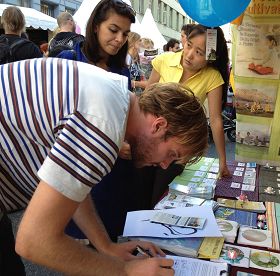 Many people signed the petition to support Falun Gong and call for the end of the persecution in China. 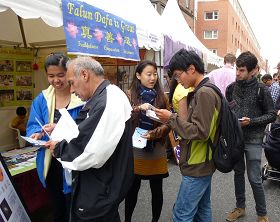 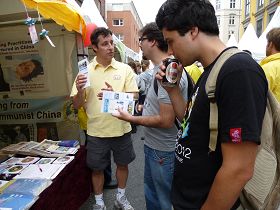 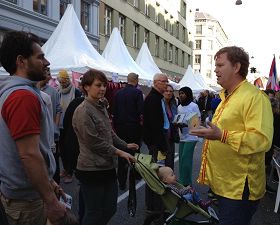 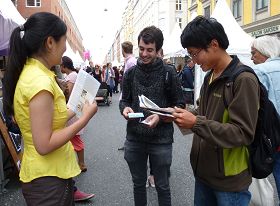 Many people also paused to watch practitioners demonstrate the gentle Falun Gong exercises, and some tried to learn the exercises on the spot by imitating practitioners' movements. Some people asked for more information and were pleased to hear that they could learn the exercises for free. Many expressed interest in visiting the nearby practice site the following week.

Encouraged by their parents, a group of children sat down with the practitioners to learn the sitting meditation exercise. One child easily sat in a double-lotus position, with both legs crossed, and listened to the practitioner's instructions very seriously. Another child could not fold his legs easily, but tried again and again; a practitioner told him to take it easy and just learn the hand movement first. 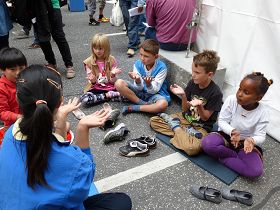 A group of children learn the sitting meditation.

An elderly Westerner dedicated to promoting human rights frequently came to visit the booth and talk with practitioners during the two-day event. When he found out that nice people were being persecuted in China, he wished to do something. He said he would use the international connections of his organization to help stop the persecution.

A young man from China, who is currently living in Denmark, came to the booth to speak with practitioners. From the conversation, it became clear that he had a misunderstanding about Falun Gong because of the CCP's propaganda. A practitioner talked with him patiently about traditional Chinese culture, religious belief, current crisis in China, and moral degradation in society at large. The practitioner also spoke about the CCP's slanderous propaganda and organ harvesting from living Falun Gong practitioners, and informed the young man that 120 million Chinese people have quit the CCP. The young man listened quietly, visibly becoming more relaxed and clear in the process. The conversation lasted more than half an hour.

A Western practitioner recovered from a serious illness by practicing Falun Gong. He went to visit another booth with the English Minghui Special newspaper and other Falun Gong informational materials in his hands. The organization at that booth, called the Centre for Human Rights, appeared to advocate for human rights but was actually greatly misled by the Chinese communist regime's hateful propaganda. The Western practitioner told the staff at the booth about his personal experience with Falun Gong and the CCP's organ harvesting from living Falun Gong practitioners. He asked them: " If you don't care about the CCP's persecution of Falun Gong and you don't want to understand how Falun Gong practitioners have been persecuted in China, then how can you label yourself as the Centre for Human Rights? " The staff of the organization became silent as they digested the information. Afterward, one of them asked: “What can we do?”