(Minghui.org) On August 26, 2012, the Falun Gong Club at the University of Illinois at Urbana-Champaign participated in an annual event where student organizations recruit new members. The club members introduced Falun Gong and informed students about the Chinese Communist Party's (CCP) persecution in China. 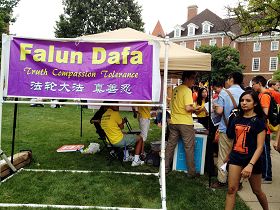 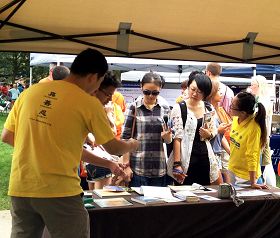 Many students stopped to learn about Falun Gong

Several hundred student organizations participated in the event. The peaceful Falun Gong exercises amidst the noisy activities drew the attention of many students of various ethnic backgrounds. Many of them signed up to join the free exercise classes offered by the Falun Gong Club.

Many Chinese students stopped to learn the truth about Falun Gong. Some of them had used software to break through the CCP’s Internet information blockade when they were in China and were already aware of the CCP's vicious deeds.

A student from Beijing approached the booth. When a practitioner explained the facts to him, he said, “I read Zhuan Falun and Nine Commentaries on the Communist Party when I was in China. I don’t like the communist party. I support you.” The practitioner invited him to join the movement to quit the CCP, and said that he could use an alias for his safety. However, the student wrote down his name and handed it to the practitioner, saying, “This is my real name. Please help me to withdraw from CCP.”

A young woman from Shanxi picked up a copy of the Nine Commentaries on the Communist Party. When a practitioner began explaining why she should consider quitting the CCP, she said, “I have quit. Many of relatives and friends have quit, too. I'm taking this booklet for my friend. I hope she can know the truth.” Before she left, she said, “Based on your belief in Truth-Compassion-Forbearance, I know you are good people.”

A Chinese student asked, “As you practice tolerance, why do you spread information that the CCP is not good?” A practitioner explained, “Falun Gong practitioners expose the CCP’s atrocities in peaceful and rational ways. We are doing this for your good as you have the right to know the truth and make a choice.” The student was moved and said, “Thank you.”

Since the persecution began very few Chinese have had the courage to learn about Falun Gong, much less learn the practice. However, at this event, many Chinese students expressed support and some signed up to learn the exercises, signifying a major change in the awareness of the Chinese public.