(Minghui.org) On August 18, 2012, the two-week-long Truthfulness-Compassion-Forbearance Art Exhibition came to a close at La Galleria Pall Mall in central London. More than three thousand people from various countries saw the exhibition. Many of the visitors to the exhibition were students or recent graduates. The moral power, courage and justice that transcends culture and age depicted in the paintings inspired a lot of the young people who came to see the artworks. 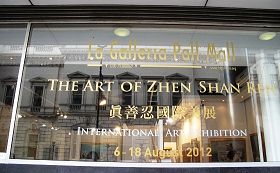 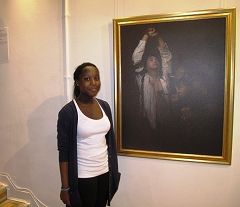 Hammi is a British high school student. Her father, from Tanzania, already knew about Falun Gong and the persecution in China. He took his daughter to see the exhibition.

Hammi studied every painting carefully. After she finished viewing the paintings, she immediately went over to sign the petition to protest persecution. She felt that every painting in the exhibition was impressive and had great educational value. Hammi said that most of her peers seem to know nothing about the persecution of Falun Gong, which she believes every one of them should be aware of.

Hammi said that the information expressed by the paintings in the Truthfulness-Compassion-Forbearance Art Exhibition was more powerful than any language could express. What impressed her most is that even in the face of cruel persecution, Falun Gong practitioners still maintain a righteous, unshakable belief. She gained a deep understanding about the meaning of the painting “Imprisoned Dafa practitioner.” She said that the practitioner in this painting was suffering from torture at the hands of the police, but he was strong and still persisting in his belief. Hammi said, “He looks not like a victim. He is just maintaining his faith, holding to his belief. The work is great, very impressive.” 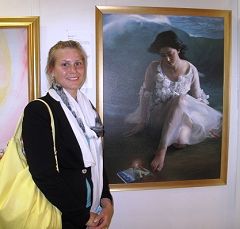 Saara Josjinen, from North Finland, is an architecture student in University. She was given a leaflet about the exhibition on the street. After reading the leaflet, Saara went to the exhibition immediately. She was stunned by the paintings and stayed a long time in the hall, studying every painting three times. She said that this was the first time she'd heard about Falun Gong. She couldn't accept the fact that the cruel persecution of Falun Gong practitioners was still occurring today.

Saara said, “I knew nothing about this persecution before. I never read any articles about it. I am so surprised that this persecution is still going on. It looks like the same atrocities that happened in WWII. I can’t image such a persecution happening in this world.”

Saara, an art lover who also likes to draw, highly praised the achievement of the artists. She noted, “All the paintings are of a very high standard. No technical errors are found in the paintings, which makes the viewers concentrate on the information expressed by the paintings. That’s a great achievement.”

Saara shared that she has always tried to find ways to obtain a peaceful mind. She's been doing Yoga exercises in recent years. She sensed the peaceful energy from the paintings in the exhibition and said that said she will search for more information about Falun Gong on the Internet after she goes back to Finland, where she hopes to begin practicing Falun Gong.

Saara said, “I believe this [Truthfulness-Compassion-Forbearance] is what we really need today. Life is busy and with so many temptation and torments. We lose ourselves. However, looking at that painting 'Who Am I,' the girl in the painting has just gotten enlightened from the book (Zhuan Falun) . I would like to have that same experience as well.” 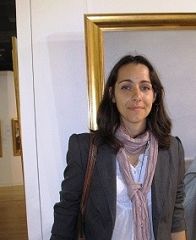 Anne-Laurie Orosco, who is French, is an independent writer and reporter. She has travelled to many places in the world and lives in London now. She concentrates on human rights issues and freedom for various groups. She got a leaflet about Falun Gong recently, and wanted to know more about it. Therefore, she went to see the exhibition as soon as she got news of it.

Anne also indicated that she wished that more people from mainland China could view this exhibition, since the information expressed in the paintings can help them to understand the true and accurate information about Falun Gong. She said that only when people know the truth, can this nation [China] have a brighter future.

Anne added, “I think those who live in mainland China may not fully realize the persecution by the Chinese Communist Party (CCP) regime, but people in the rest of the world can see clearly the imposition on personal freedom by the CCP since we have more transparency and communication channels here. I believe the power of people can effect changes in the future. However, people must know the truth first.”

The Truthfulness-Compassion-Forbearance Art Exhibition closed in London after a successful showing. It was scheduled to open in Edinburgh on August 20th for a two-week run.