Documentaries Expose Persecution of Falun Gong and Live Organ Harvesting: Screened in US Capitol and UN Palace of Nations

(Minghui.org) Award-winning documentaries Free China: The Courage to Believe and Between Life and Death were screened at the United Nations Human Rights Council meeting in Geneva and at the U.S. Capitol in Wahington, D.C., in September 2012. The films exposed the persecution of Falun Gong and the crime of organ harvesting from living Falun Gong practitioners currently taking place in China.

Free China: The Courage to Believe, a documentary about widespread persecution of Falun Gong practitioners in China, has won 5 prestigious film awards since its release in early 2012, including the top award in its category at the West Hollywood’s Awareness Film Festival (May 2012) and Honor Award at the LA Indie Film Festival (September 2012).

The film profiles the lives of two Falun Gong practitioners and the danger and pain they encountered in China in their quest for spiritual freedom. Incarcerated and at risk of being killed for their organs, they were shocked with electric batons, force-fed and subjected to slave labor to produce items exported to the West. The film touches on many angles of the communist regime's persecution of Falun Gong, including imprisonment, torture, brainwashing, forced labor, live organ harvesting and Internet censorship, offering the audience a broad view of the human rights abuses taking place in China.

Between Life and Death, a documentary investigating the surge of organ transplants in China over the past decade, won a merit award in the Investigative Reporting/News Documentary category at the 47th Chicago International Film Festival in April 2012.

By analyzing the Chinese government's officially published numbers and media reported cases; interviewing independent investigators, professionals and witnesses; and citing the testimony of a principal criminal apprehended by Israeli police, the film documents how the Chinese communist regime systematically built up a large organ and tissue database of Falun Gong practitioners and other dissidents and then harvested their organs while they were still alive to sell to patients for huge monetary gain.

The 21st session of the UN Human Rights Council convened in the Palace of Nations in Geneva, Switzerland, on September 10-28, 2012. On September 18, the International Educational Development, a California-based human rights organization, urged the UN to make an emergency investigation into organ harvesting from living Falun Gong practitioners in China.

Award-winning documentaries Free China: The Courage to Believe and Between Life and Death, exposing the Chinese regime's persecution of Falun Gong and crime of organ harvesting, were screened in the Palace of Nations the following day. The films shocked the delegates and NGO representatives in attendance. Some attendees asked if these films could be screened in their countries and organizations so that more people could learn the truth.

Panel discussion after Free China: The Courage to Believe film screening at the UN Human Rights Council meeting in Geneva, on September 19, 2012. 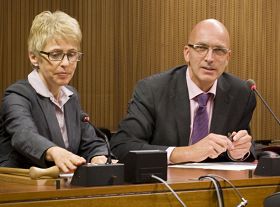 Marc Falquet, chairman of the Commission on Human Rights of the Grand Council of Geneva: Chinese regime is destroying the best of society by persecuting Falun Gong practitioners.

Speaking of organ harvesting, chairman of the Commission on Human Rights of the Grand Council of Geneva, Marc Falquet, said that he was shocked to learn that Chinese government had systematically organized such crime. He pointed out that in persecuting Falun Gong practitioners the regime is destroying the best of Chinese society. Mr. Falquet believed that exposing the truth will stop the evil, so it is very important to let more people know about the persecution and organ harvesting as soon as possible.

Following recommendation by the Worldwide Organization for Women (WOW), the two films were screened at the Palace of Nations again on September 21. Ms. Afton Beutler, president of WOW, hosted the second screening. 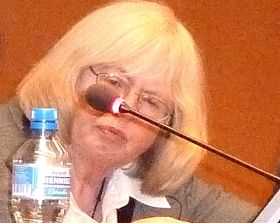 Ms. Afton Beutler, president of the Worldwide Organization for Women: UN should go to China to investigate over the live organ harvesting.

When introducing the films, Ms. Beutler noted that Chinese regime's crime of harvesting organs from living Falun Gong practitioners is not yet widely known. She pointed out that live organ harvesting violates basic human dignity and urged the UN and international community to launch an independent investigation into this human rights catastrophe.

Many delegates and representatives at the UN Human Rights Council meeting said that they had learned about live organ harvesting through various channels over the past several years. They felt greatly encouraged that it could be exposed during the 21st session of the Human Rights Council and said that they would do their part to spread the truth and stop this grotesque crime. The mainstream media in Switzerland and other countries also recently reported on this crime, further exposing the gross human rights abuses taking place in China to the public.

Free China: The Courage to Believe Screened in the US Capitol

The documentary Free China: The Courage to Believe had a private screening at the U.S. Capitol on the evening of September 20. The viewers were shocked and deeply moved by the contents of the film. 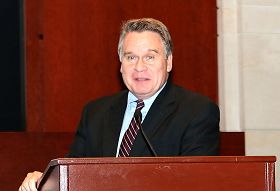 U.S. Congressman Chris Smith (R-N.J.) thanked Free China producers for giving people hope. He said that the film is much more than a documentary, as it not only told of the sufferings endured by Falun Gong practitioners, but also demonstrated practitioners' courage. The congressman also noted that the Chinese regime's fragility was clearly exposed in the film: The regime had initially endorsed Falun Gong as a peaceful and beneficial cultivation practice, but later felt threatened and launched a brutal persecution to eradicate the practice.

“There's no doubt in my mind that policy makers at the U.S. Department of State, in Congress (House and Senate), even the president of the United States and Secretary of State Hilary Clinton--they need to watch this [film] to really get the gravity of the oppression that is all encompassing, that is spread by the propaganda machine of Chinese agenda,” said Congressman Smith. He hoped that the film could be spread through the Internet, television and other broadcast networks, so that hundreds of millions of people could learn the truth, be encouraged and moved, and take action. When the truth is known to the public, the evil will cease to exist.

Congressman Smith emphasized the importance of taking immediate action and pointed out that the crime of organ harvesting goes beyond endurable human limit and challenges the limitations of human language. On September 12, he and U.S. Congressman Dana Rohrabacher (R-Calif.) co-chaired a hearing titled "Organ Harvesting of Religious and Political Dissidents by the Chinese Communist Party" on Capitol Hill.

On September 18, Congressman Smith's report detailing the evidence of organ harvesting from living Falun Gong practitioners was published in the Washington Post. The congressman also co-sponsored a “Dear Colleague” letter, asking the State Department to release any information it may have relating to organ transplant abuse in China. 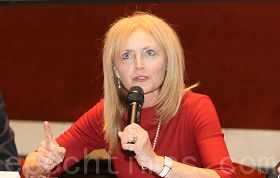 Dr. Katrina Lantos Swett, chair of the U.S. Commission on International Religious Freedom: Falun Gong practitioners' courage and perseverance in the face of persecution is inspiring.

Dr. Katrina Lantos Swett, chair of the U.S. Commission on International Religious Freedom, said that she was deeply impressed by Falun Gong practitioners' perseverance and their courage to strive for freedom of belief in a peaceful manner. She noted that even under cruel, long-term persecution, Falun Gong practitioners have stuck to kindness, tolerance and peace. They face everything with the hope and spirit of never giving up, she said, and their stories inspire others to be better people. 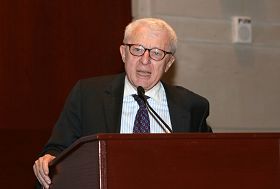 Michael Horowitz, senior fellow at the Hudson Institute, thought that the most important issue in the 21st century is where China is heading. This has significance for everyone around the globe and their descendants, he said.

The two Falun Gong practitioners interviewed in the film, along with millions of other Falun Gong practitioners, are real heroes, said Mr. Horowitz with emotion. It is because of their courage and efforts that freedom will come and history will be rewritten, he added, and this will ensure that the next generation can have freedom.

“I express my deepest gratitude to the Falun Gong practitioners. I really admire you!” said Mr. Horowitz.