(Minghui.org) On the weekend of September 14 to 16, Falun Dafa practitioners gathered in Barcelona to do the exercises together, study the Fa, and hold activities to clarify the truth. 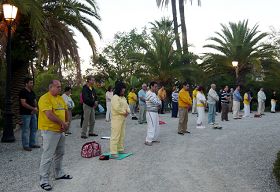 Group exercises in the morning 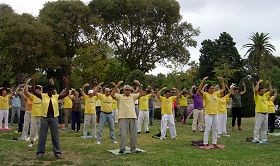 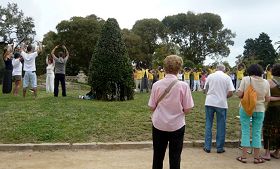 On Sunday morning, the practitioners went to Barcelona's famous Arc de Triomf Park to do the exercises together. The activity drew many local residents as well as tourists who wanted to learn more about Falun Gong and asked questions about the persecution in China. Almost all of them signed the petition to support Falun Gong's efforts to end the persecution. Some of them stayed to learn the exercises.

A Chinese tourist—a young woman—was surprised to see so many people practicing Falun Gong in a park in a foreign country. A practitioner gave her some CDs that explain the facts about Falun Gong and a DVD of the Nine Commentaries on the Communist Party. When she learned that the Tiananmen Self-Immolation incident was a staged propaganda stunt to vilify Falun Gong, her eyes widened and she said, “Oh, so that's the truth.” She took the DVDs and promised to look at them.