Organ Harvesting in China Focus of Attention at UN (Photos)

(Minghui.org) The 21st Session of the United Nations Human Rights Council convened from September 10 to 28 in Geneva, Switzerland, for a series of meetings. Representatives from more than 190 countries from all over the world and more than 200 human rights organizations attended the meetings. The UN Human Rights Council's 16th Plenary Meeting was held on September 18. Two non-governmental organizations (NGOs) urged the UN to make an emergency investigation into organ harvesting from living Falun Gong practitioners in China. Representatives at the meeting were shocked by this human rights tragedy. 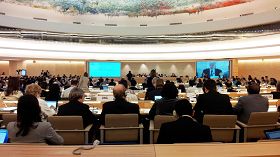 The 21st Session of the United Nations Human Rights Council convenes in the Palace of Nations in Geneva, Switzerland.

The Freedom of Peaceful Assembly International Human Rights Forum was held in the Palace of Nations on September 17. Organ harvesting from living Falun Gong practitioners became a focus of attention. Member of the Swiss National Council Mr. Mauro Poggia couldn't attend the forum because of his commitment in the council but he sent a letter stating that the crime of organ harvesting from living Falun Gong practitioners must be condemned. An international investigation commitment should be established immediately and should bring the perpetrators to justice with the firmest determination. 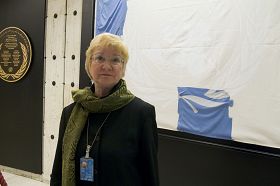 Karen Parker, a human rights lawyer and chief representative of International Educational Development, said that her group was concerned about the “continuing evidence that the organs of many [Falun Gong] practitioners are forcibly harvested,” and added the pointed remark that: “We are aware that the Council as a whole will not address any issue in China due to political considerations. However, we urge that states eliminate the market for organs from China and that the Special Rapporteurs on Summary Execution, the Right to Health, and the Right to Freedom from Torture look into this matter as an issue of great urgency.”

Reporters from Radio 92.2, the newspaper Tribute de Geneve, the Swiss News Agency at the UN and other media showed great concern over the CCP's organ harvesting crimes and expressed their wish to expose the tragedy to the international community. 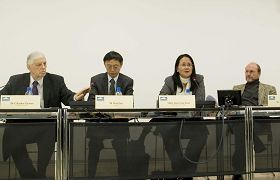 Dr. Graves pointed out that more and more evidence has emerged, proving the practice of organ harvesting from living Falun Gong practitioners. The CCP has covered it up and has strongly pressured western media. He said activities exposing the crimes would continue until the atrocities stop.