This incident unfolded after the police handcuffed the practitioners and drove them to Zhongshan Police Department and held them at different places in the basement. An officer claimed to have captured photographic evidence that the four had installed a satellite TV receiver. They used intimidation, threats, and lies to force them to confess. The police showed a document with an image of Zhang Guoli holding a satellite dish. But this “surveillance camera shot” appeared to be fabricated by a computer. In fact, when the police arrested Mr. Zhang, they had no idea who he was. They even mistook him for another practitioner.

The police did not allow the practitioners to use the toilet during detention. They also attempted to force them to give their fingerprints. When they refused to cooperate, the police angrily punched and kicked them. The practitioners were transferred to Yaojia Detention Center the following day.

Due to mistreatment, Mr. Zhang Guoli suffered kidney failure and had a hard time eating and drinking. On July 27, he was led away in handcuffs and shackles and taken to a military hospital for blood and urine tests. A doctor reported that Mr. Zhang had a number of health issues, but this was not what the police wished to hear. The officers brought in a second doctor, who suggested that Mr. Zhang did not eat and drink enough. But he was too ill to eat. Following the exam, detention center head Jia and others took Mr. Zhang to Military Hospital 201 near the detention center. They locked him in a room with two surveillance cameras and chained him with shackles day and night.

After head Zhao and a guard tied Mr. Zhang’s hands to the headboard of a bed, a nurse forced a needle into his arm. In an instant, Mr. Zhang was paralyzed. He felt a sudden acceleration of his heartbeat, and his head, face, and body began to go into spasms. His face became contorted, with tears streaming down his cheeks. He felt like he was dying. An inmate saw this, quickly pulled out the needle, and called for help. The guards came and unlocked his handcuffs and no longer insisted on injecting him with drugs. But Mr. Zhang soon began to experience incontinence. He had blood in his urine and feces, and his chest pain was so bad that he often rolled on the floor at night. He also had trouble breathing and fell to the floor repeatedly, but no one paid any attention.

The guard accused him of faking his illness. One day after Mr. Zhang came back to the cell, he collapsed into bed. Team head Wang pulled him up from the bed and slapped his face repeatedly while telling other inmates that he deserved abuse like this. 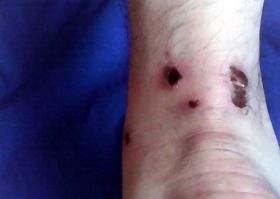 On August 7, 2012, two team heads from the No. 4 and No. 5 Wards came to Hospital 210 to pick up Mr. Zhang. But when they saw his condition, they refused to pick him up, saying he could die any time. When Mr. Zhang was sent back to the hospital, several doctors saw him and wondered why they sent a dying person back to them. He was too weak to sit in a chair and fell down to the floor. A doctor was checking another patient, and he did not do anything to help Mr. Zhang. He asked Mr. Zhang if he could eat and told him he had nothing to worry about.

Several inmates from the detention center carried Mr. Zhang back to the detention center. He now weighed only 30 kg (his normal weight was 75 kg). He was placed in cell 59. The prison doctor came to check his blood pressure in the evening and was shocked to find Mr. Zhang in critical condition. He quickly moved him to the prison hospital, where doctors there decided they could not treat him, so he was rushed back to Military Hospital 210.

The following day, August 8, police officer Cao from Zhongshan Police Department notified Mr. Zhang Guoli’s father to take his son home. When he saw his son being carried by two men and unable to walk, the father angrily asked the police why they did not tell the family earlier. He then checked his son’s ankles and saw the wounds. The elderly father could not contain his grief and burst into tears. When Mr. Zhang was initially detained, his mother had a nervous breakdown and lost bladder control. An officer asked Mr. Zhang’s father to sign a release statement, but his son was steadfast in refusing to give his fingerprint. The officers plan to extort money from the Zhang family also failed.